📸 Through The Lens | The Steeplechase

If you ever see a herd of photographers all moving in one direction at a track meet, it must be steeplechase time. Photographers might not drink from the font that is the water jump, but they surely love taking pictures of it and the barrier that goes with it. Tacked along with four additional leaps over obstacles, 36 inches high for men and 30 inches tall for women, that is a lot of jumping in a 3,000-meter race. It is an event that many might question with one word – “why?” In this, the final installment of three stories from past Kansas Relays, let us ponder the unique event.

The schedule at a track & field meet contains events that date back to ancient times. Founded by the Greeks, the Games we now know as the Olympics quickly grew to five days of competition by the 5th century B.C. The ancient Games included running, the long jump, shot put, javelin, boxing, equestrian events and pankration.

Pankration, by the way, combines wrestling and boxing in an “all force” event where only biting, gouging and attacking genitals were not permitted. However, since today’s MMA fighting is not one of the 18 team sports KU contests, that will be a topic for my post-KU life.

It is easy to see how those ancient events grew from combat, contested by warriors. I believe today’s steeplechasers remain warriors. What I wonder in my oft-addled mind is how an equestrian jumping event, still held in the modern Olympic Games, is also a part of track & field with the male and female athletes serving as the horses. If someone wants to argue that soldiers in war leap over obstacles, someone could counter with, “what about the 400-meter hurdle race?”

Please understand, I love the steeplechase. Some of my most-admired KU track athletes over the years are steeplechasers. Like other photographers, I have raced to the water jump for the splashdowns using a telephoto lens or a wide-angle lens on remotely-fired cameras set alongside the water jump. I have allowed myself to be soaked or used cases and plastic shrouds to protect the equipment, for what are almost always dramatic photographs.

It takes guts to run the brutal event. Of those five barriers, only on the water barrier do elite runners place a foot on top to power over as much of the slopping water pit as possible. Unlike hurdles which easily tip for a mistimed leap or a dragging leg, the substantial barriers never give an inch as they are hurdled, after one lap, with sopping wet, spiked shoes. The most devastating crashes always come from a tumble into or off one of the obstacles. Of course, the water barrier tops them all. 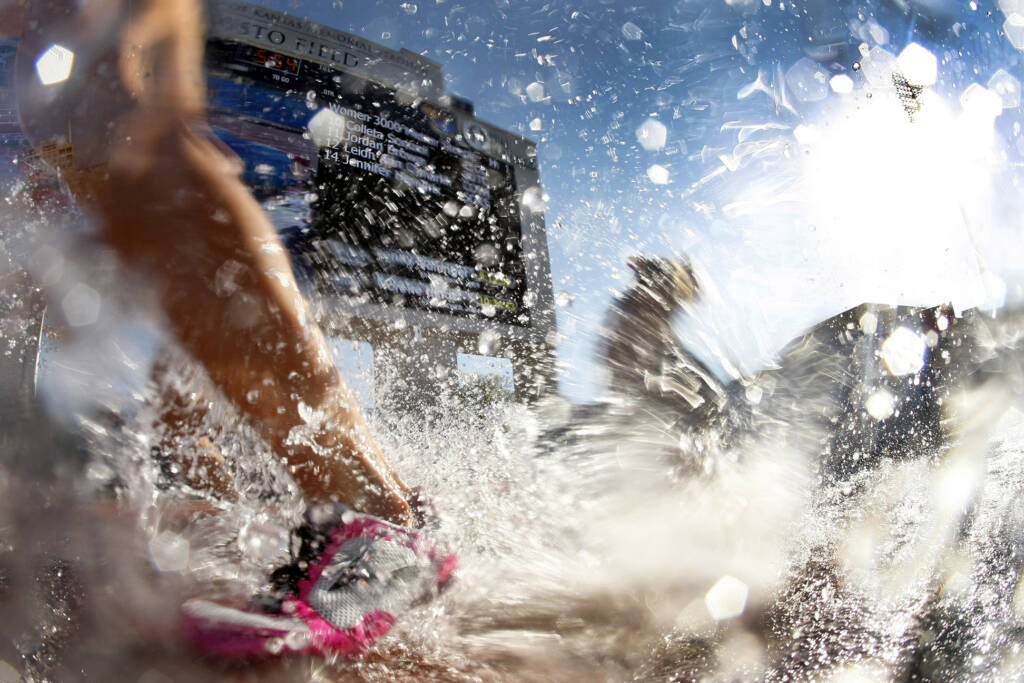 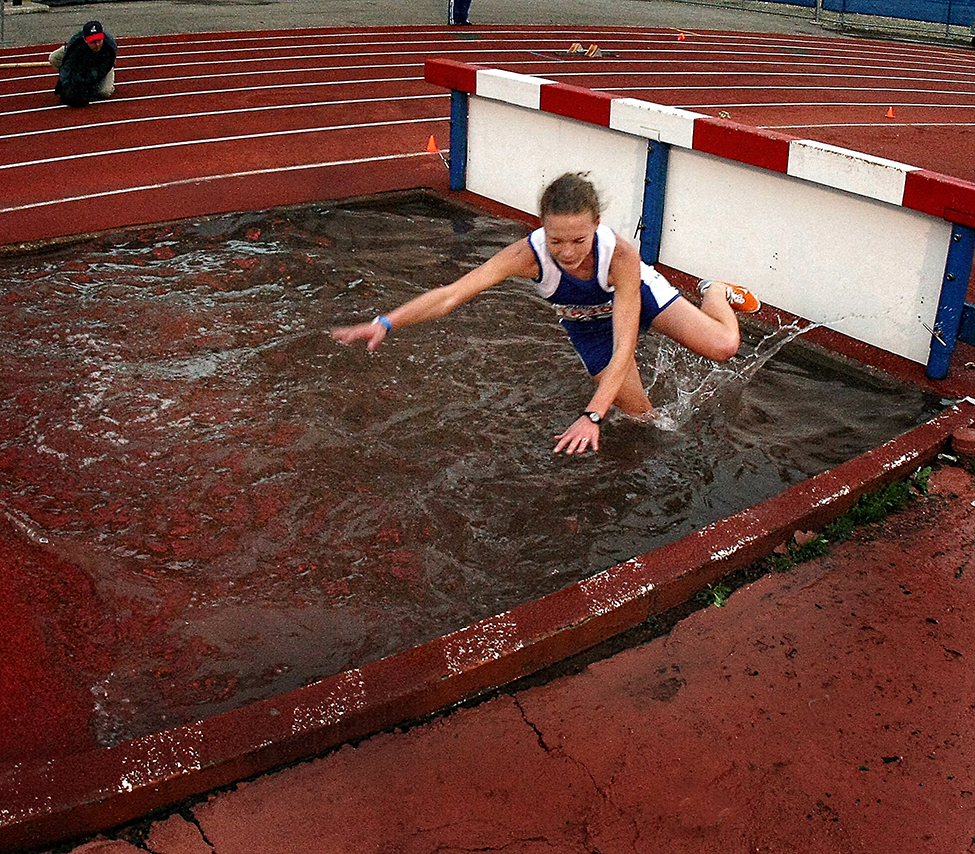 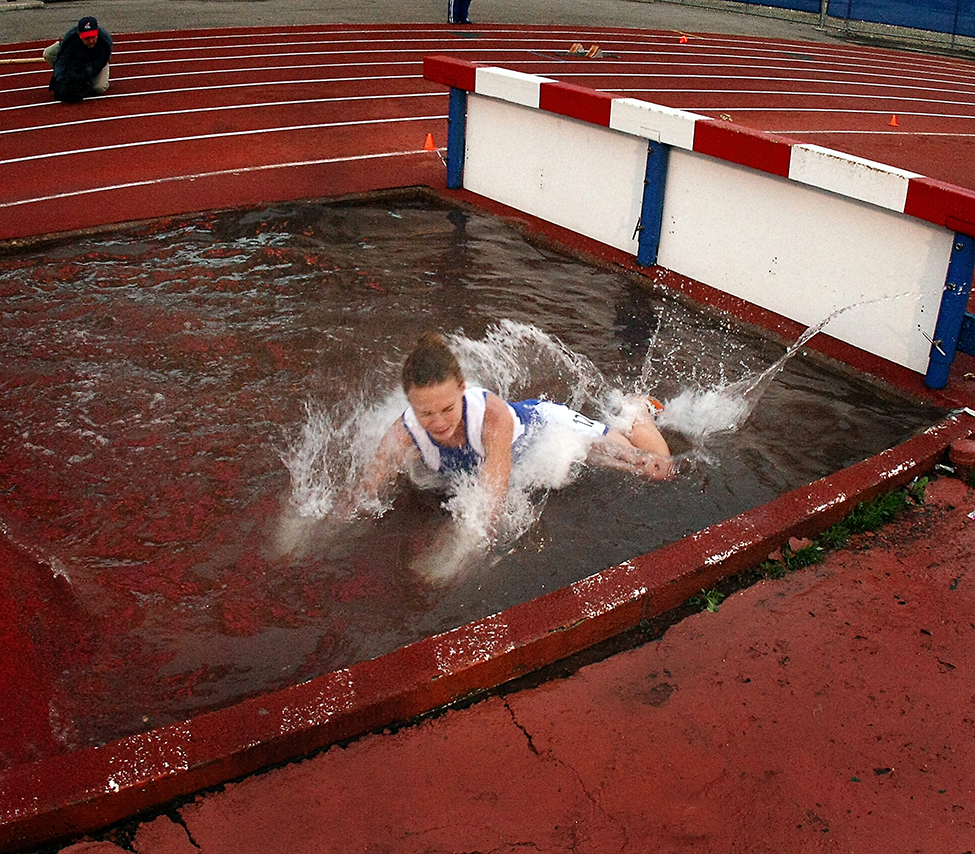 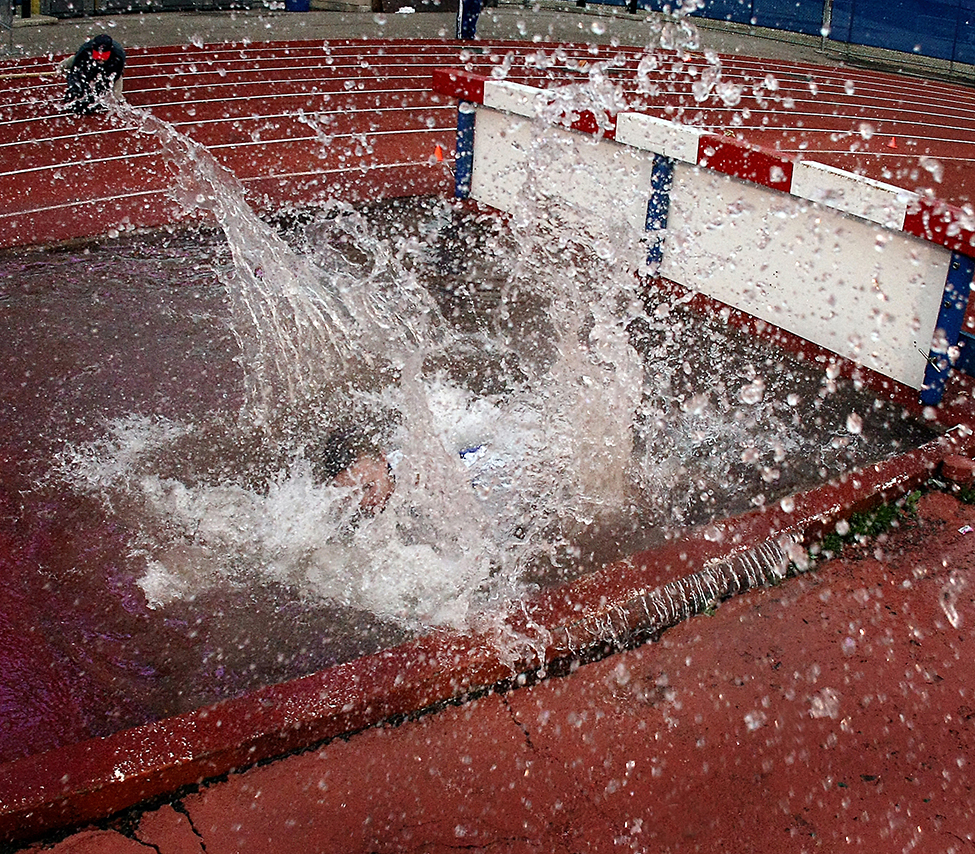 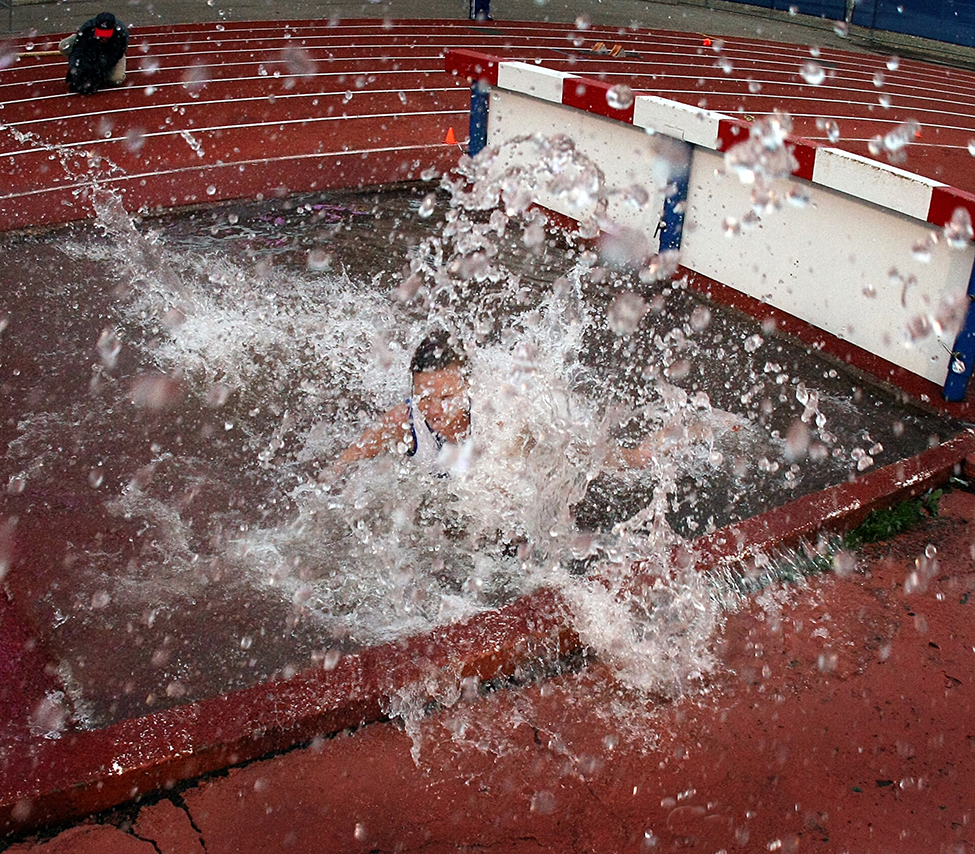 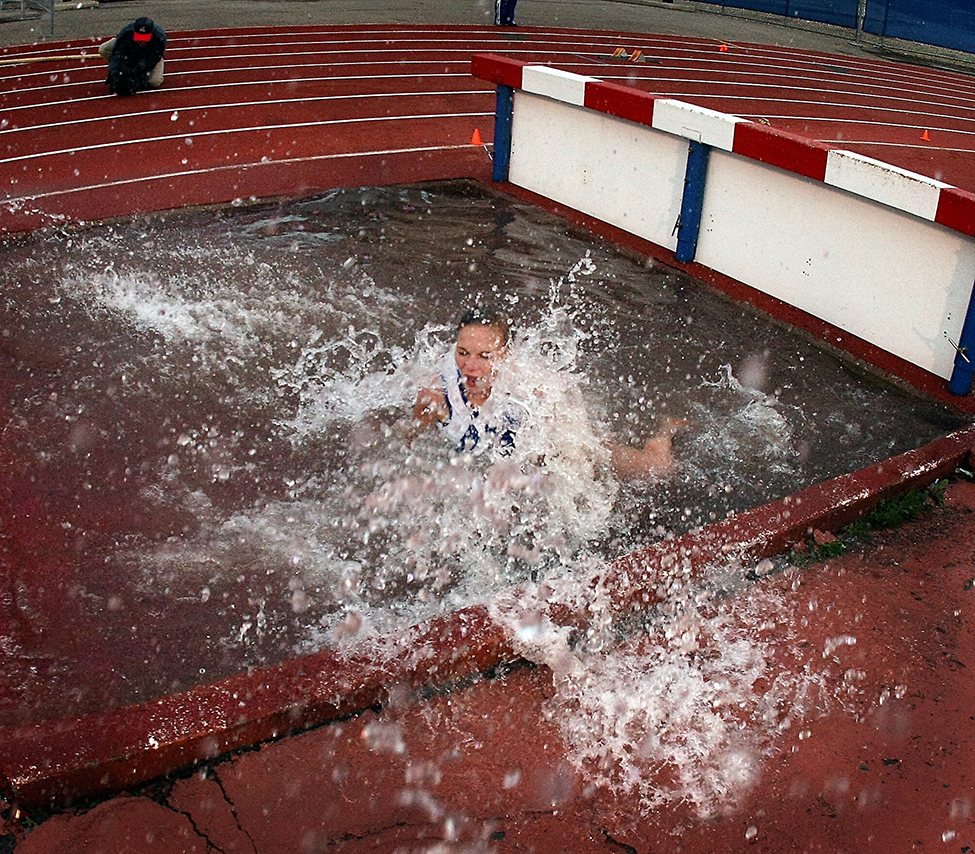 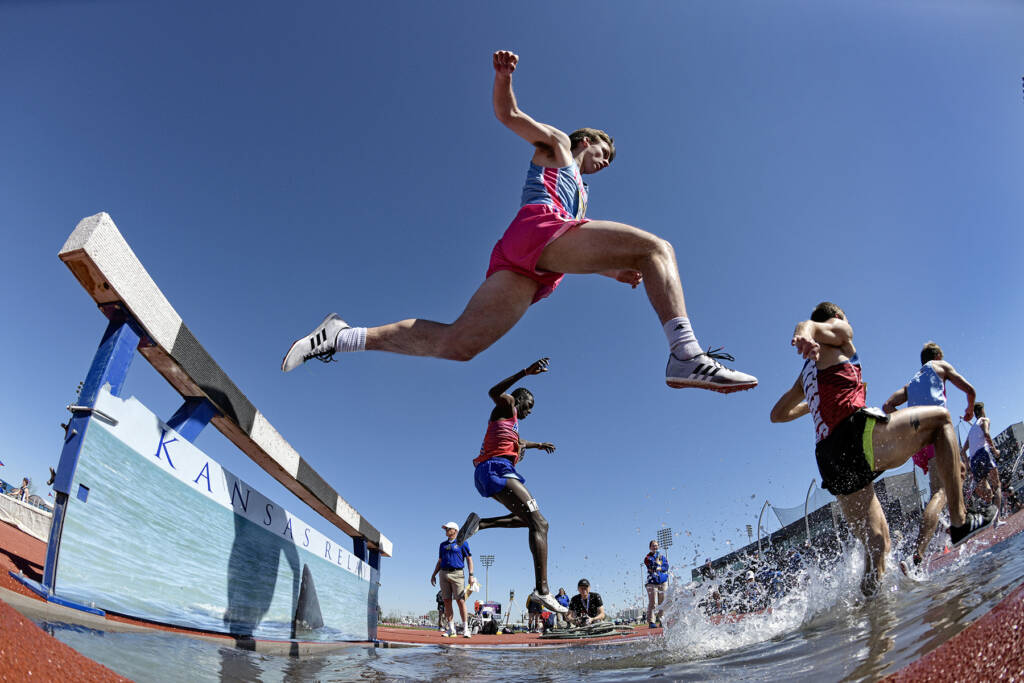 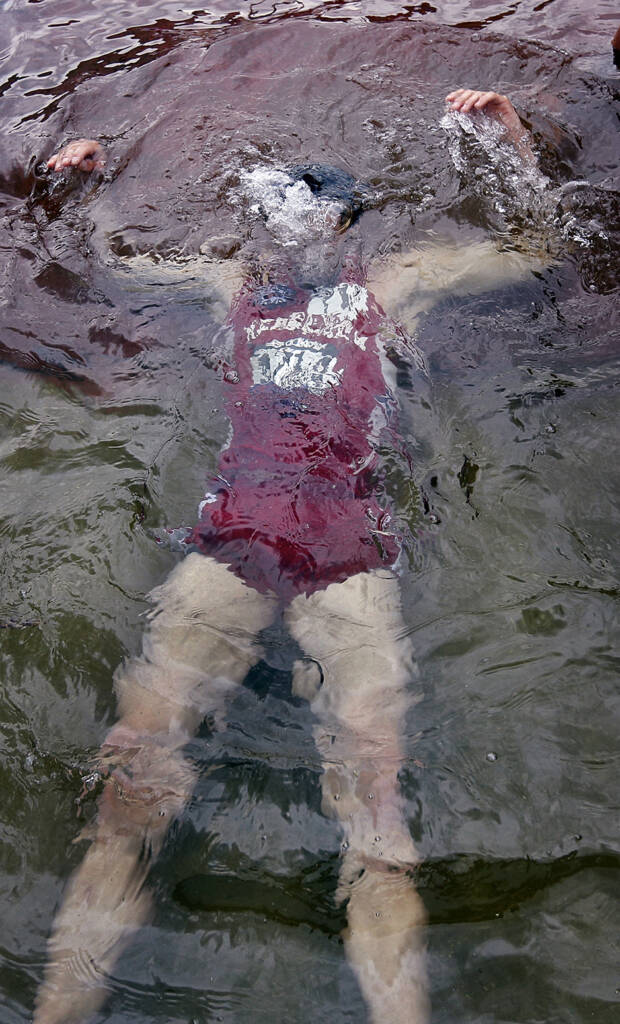 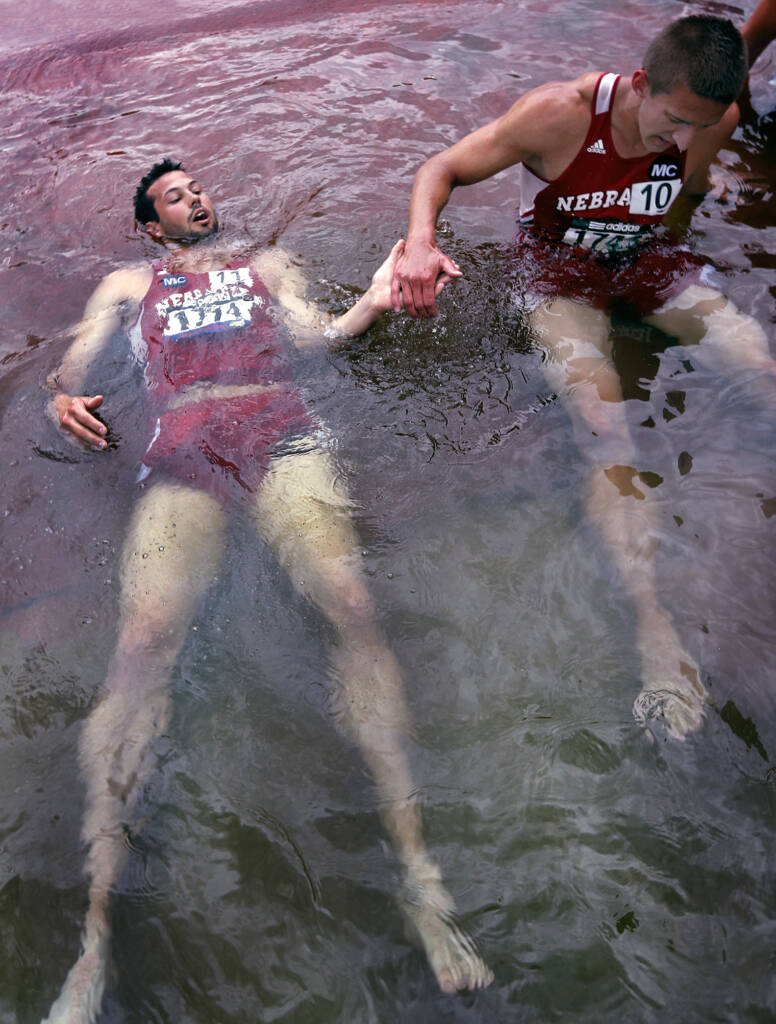 My selection of photographs from the Kansas Relays accompanying this story leads off with a shoe emerging from the water with spray flying everywhere in 2011. In 2008, I captured a sequence of a dramatic plunge by a runner whose foot slipped off the water barrier. That fall into the 28-inch depths of the water pit stunned me. The other images captured display the speed, grace and power from the 2014 and 2019 races.

Not surprisingly, two of my favorite photographs involving the water pit had nothing to do with a steeplechase race. After the completion of the two-day, 10-event decathlon during the 2012 Kansas Relays, event winner Bjorn Barrefors immersed himself in the cold water after the final event, a 1,500-meter run. Soon after, runner-up and teammate Teran Walford joined him in what became a play pool on the unusually hot April day.

My sincere hope is that you have enjoyed the three stories about photographs from the Kansas Relays. God-willing, when sports resume, I hope you will make plans to attend the 2021 Kansas Relays and join me in celebrating the greatness that is track & field.