LAWRENCE, Kan. – Coming off its second-place finish in its opening tournament of the season, the No. 34 Kansas men’s golf team will head to the west coast to compete in the Bandon Dunes Championship at the Pacific Dunes Course in Bandon, Ore., March 8-10. 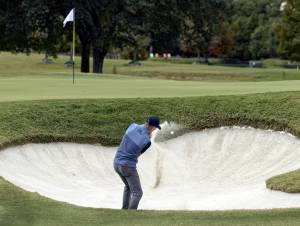 "I think we are in good shape with the way we played in Puerto Rico. Now its time to go up there and test our game against some good teams."

The Jayhawks finished in second place on the team leaderboard at the TPC Dorado Beach Collegiate with the second and third round canceled due to weather. KU shot 12-under par 276 in the opening round, seven strokes behind the top finisher, No. 21 Louisville. Junior Ben Sigel earned first place honors as he finished tied for the top spot scoring 7-under par 65. The opening round marked a career-low round for Sigel.

Live scoring can be followed on Golfstat.com and the final round will be streamed on College Golf TV, which can be watched here.