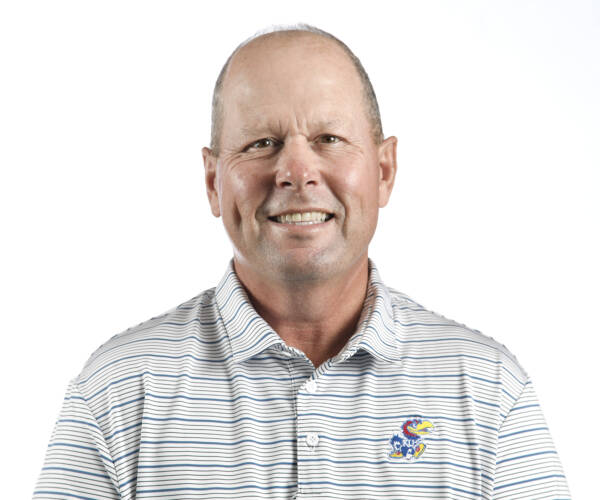 Preparing to enter his 11th season as the Kansas Men’s Golf Head Coach, Jamie Bermel has established the Jayhawk program as one of the premiere programs in the Midwest. Under Bermel’s leadership, the Jayhawks have qualified for six-straight NCAA Regionals, have won 16 tournaments and registered 66 Top 5 finishes. The very respected veteran coach has also led the Jayhawks to two NCAA Championships, including in his most recent season, 2021-22.

During the 21-22 season, Bermel led the Jayhawks to perhaps the most successful season in program history. The Jayhawks won five tournaments, establishing a new program record and also were ranked as high as No. 9 in the national rankings. Three individuals also earned medalist honors, winning titles at the Gopher Invitational, the Windon Memorial and the Hawkeye Invitational.

The 2021-22 season has started masterfully for Bermel and his Jayhawks. Kansas won four-straight stroke play tournaments in the fall season, picking up wins at the Gopher Invitational, the Windon Memorial Classic, the Quail Valley Collegiate and the Ka’anapali Collegiate Classic.  Kansas didn’t finish lower than fifth place in a stroke play event during the fall season. The Jayhawks were ranked as high as No. 9 in the Golfweek/Sagarin Rankings.

The banner year in 2021-22 continued the impressive overhaul of the Jayhawks program during Bermel’s time as head coach. When he arrived, Kansas was ranked No. 131 among NCAA Division I teams in the GolfWeek College Team Ratings; the same poll the Jayhawks reached the Top 10 in last year.

Near the completion of the season, Bermel signed a new five-year contract with Kansas that will keep him with the Jayhawks through the 2026-27 season.

In an abbreviated fall season due to the COVID-19 pandemic, the Jayhawks still managed a pair of Top-5s, picking up a T4 finish at the Colonial Collegiate Invitational and Big 12 Match Play, featuring one of the top fields in the country. The Jayhawks also finished in second at the Hawkeye Invitational at Iowa during the spring season. Harry Hillier led the way for the Jayhawks in four of the team’s eight stroke play events.

Bermel and the Jayhawks had a strong start to the 2019-20 season. Kansas finished second at the Badger Invitational to open the season, which was the team’s first of five top-five finishes on the year. Bermel’s squad also finished tied for fourth at the Windon Memorial Classic and fourth at the Bandon Dunes Championship in March of 2020 in the team’s final tournament. The Jayhawks also finished second at the Big 12 Match Play Championship and the TPC Dorado Beach Collegiate.

The Jayhawks also had some standout individual performances under Bermel’s guidance in 2019-20. Ben Sigel took home a win at the TPC Dorado Beach Collegiate, while Harry Hillier and Luke Kluver each recorded top five finishes during the season.

During the 2018-19 season, KU finished placing inside the top-five in nine of the team’s 12 events. This included claiming first place at The Jackrabbit when the team finished 19-under for the tournament (11 strokes better than the second-place UCF). The Jayhawks also took home second place in the Big 12 Match Play Championship after defeating the No. 1 seeded Oklahoma State Cowboys in the semifinal match. The team earned a spot at the NCAA Regional for the fourth consecutive season under Bermel’s guidance.

Under Bermel’s direction, the 2017-18 Jayhawks carded 679 birdies (1st in KU history), 21 eagles (2nd in KU history) and 20 par or better rounds (2nd in KU history). Sophomore Andy Spencer set the bar high with a team-best 71.98 stroke average, which places him at No. 4 in the Kansas record books. Junior Charlie Hillier finished second on the team in scoring with a 72.50 average. Bermel had four players post top-10 efforts on the season, which included senior Daniel Sutton’s 3rd place finish at the Irish Intercollegiate and senior Daniel Hudson’s T3rd place at The Jackrabbit.

Kansas went on to win the 2018 regional by one-stroke, shooting 20-under-par. This performance sent the Jayhawks to their first NCAA Championship appearance since 2000.

Kansas placed third at the Big 12 Championship and tied for ninth at the NCAA Austin Regional.

Kansas won four tournaments during the 2015-16 season, claiming wins at the Badger Invitational, the Price’s Give ‘Em Five Invitational, the Desert Intercollegiate and the Great River Entertainment Invite. The Jayhawks qualified for the NCAA Tuscaloosa Regional and placed 10th after a sixth-place finish at the Big 12 Championship. Connor Peck led the team with a scoring average of 72.00.

The Jayhawks claimed a tournament title at the Desert Shootout in Phoenix in the spring, finishing with a three-day score of 829. The Jayhawks also picked up Top-5 finishes at the Wolverine Intercollegiate, the Ram Masters Invitational, the Sagamore Preview, the Price’s Give ‘Em Five Invite, the Ka’anapali Collegiate Classic and the Louisiana Classics Invitational.

In his second season at the helm, Bermel led the squad to four Top-5 finishes, including at the Badger Invtitational, the UTEP Price’s Give Em Five Invite and the Hawkeye Invitational. The Jayhawks finished eighth at the Big 12 Championship.

Named the Kansas head men’s golf coach by KU director of athletics Dr. Sheahon Zenger in July of 2012, Bermel got to work immediately. During his first season, 2012-13, KU won the Hawkeye Invitational to claim its first tournament win in more than three years. Additionally, Kansas finished four tournaments sixth or better in 2012-13.

Bermel (pronounced Bur-mal) came to Kansas from Colorado State where he was the head coach since the 1999-2000 season. Under his direction, he led the Rams to the NCAA golf regionals for six-straight seasons dating back to 2007, as his 2011 CSU squad advanced to the NCAA Finals.

No stranger to the Midwest, Bermel coached two seasons at Iowa State, from 1997-99, where he guided the Cyclones to the 1999 NCAA Tournament and nine top-5 finishes. Before ISU, he spent five seasons as head golf coach at Drake University in Des Moines, Iowa. While at Drake, his team won the 1997 Missouri Valley Conference championship and twice qualified for the NCAA Tournament in 1996 and 1997, with the 1997 team advancing to the NCAA Finals. Bermel was a three-time Missouri Valley Conference Coach of the Year in 1995, 1996 and 1997.

In his years as a collegiate head coach, Bermel has helped develop the games of a number of players who have moved on to the next level. Included is the 2007 Masters and 2015 Open champion Zach Johnson, who played for Bermel at Drake. and Martin Laird, a Colorado State standout who, along with Johnson, competes on the PGA Tour. Bermel’s most recent pupil to play professionally is Chase Hanna, a 2016 All-American with the Jayhawks, who currently competes on the DP World Tour (formerly the PGA European Tour) and is inside the Top 250 of the Official World Golf Rankings.

Bermel is a 1986 graduate of Central College in Pella, Iowa, and received his master’s degree from Purdue University in 1988. From 1989-91, Bermel worked in recreational sports at the University of Michigan and moved to a similar role at Drake, adding the men’s golf coaching duties in Feb. of 1992.

Bermel and his wife, Jacque, have three children: Emily, Jackson and Charlie. Emily is a 2019 graduate of the University of Kansas and played softball for the Jayhawks. She graduated in 2021 from Kansas State with an MBA and currently works in the Wildcats athletic department as a learning specialist. Jackson currently works at Lawrence Memorial Hospital in dining services. Charlie is a 2022 graduate of the United States Air Force Academy and is currently a 2nd Lieutenant, training to be a Special Tactics Officer in the United States Air Force.

Jamie’s brother, John, is the men’s and women’s golf coach at the University of Northern Iowa and serves as the head pro at Pheasant Ridge Golf Course in Cedar Falls, Iowa.