Attendance at David Booth Kansas Memorial Stadium has already shown major increase this season in a span of three home games. On Saturday against West Virginia, 35,816 fans filled the stands to watch the Jayhawks open up their Big 12 Conference portion of the 2019 schedule against the visiting Mountaineers, the most fans at a home game since 36,223 turned out against K-State in 2017. Although Kansas lost, the crowd played a major role in the home team’s performance on the field.

“I was thrilled,” said Kansas head coach Les Miles about the crowd turnout. “You walked into a stadium that was very alive. People were enjoying football. And I’m thrilled. All we’ve got to do is win a couple more games in a row and do some things that we should enjoy doing. Because, to me, the support is coming. And we (the Jayhawks) are coming.”

The Jayhawks had a strong defensive outing, especially against WVU’s quarterback, Austin Kendall, recording three sacks in the first half. Along with the three sacks, senior safety Mike Lee and junior linebackers Kyron Johnson and Dru Prox led the defensive effort with 8.0, 7.5 and 7.0 tackles on the day, respectively. In addition, Prox made one sack for a loss of 10 yards, while both he and Johnson each recorded a tackle-for-loss against the Mountaineers… Big plays like this only got the Kansas fans more invested into the game as KU’s defense held West Virginia to only completing 9-of-18 third-down conversions.

When the defense was making plays, the stadium of 35,000-plus Jayhawks faithful was loud. The fans loved watching the team make plays and allow the offense to get back on the field to score. Along with a great defensive outing, once the offense came alive, the fans were even more into the game, continually rooting on the home team. Junior wide receiver Andrew Parchment had another stellar performance on the offensive side of the ball, hauling in five receptions from senior quarterback Carter Stanley, good for 132 yards and two touchdowns. It was Parchment’s third 100-plus receiving yards game of the 2019 season as well as his second-consecutive game making it into the end zone twice for the Crimson and Blue.

After a hard-fought loss, the Kansas fans gave their Jayhawks a standing ovation as they ran off the field into the locker room. Not only did this prove to the team that they have garnered a strong fanbase backing them this season so far, but also that those in the stadium on Saturday afternoon respected the effort they gave versus West Virginia. Senior linebacker Najee Stevens-McKenzie noticed the support of the fanbase, and took time after the game to thank the fans as he walked to the locker room.

“The fans were motivated, without them we’re nobody. The fans saw improvement, they saw a team that’s fighting,” Stevens-McKenzie said when asked about the crowd’s response as the Jayhawks exited the field. 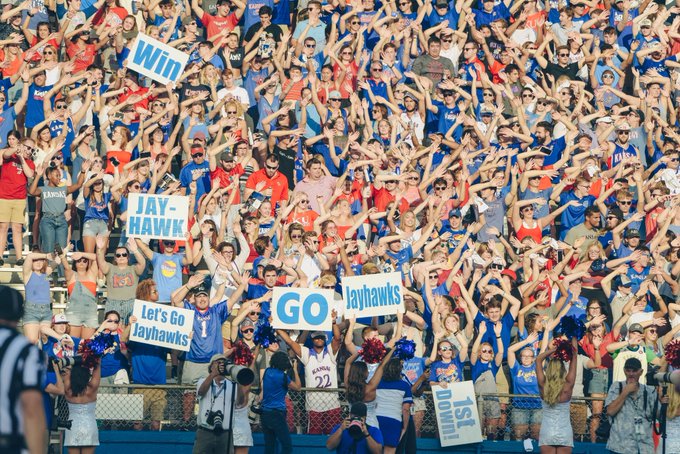 Miles reiterated Stevens-McKenzie’s sentiment about the Jayhawk fans. “That fanbase that’s giving them a standing ‘O’ and enjoying how they played makes a difference.. It really does. And we thank them. (We) Thank them for being there, thank them for supporting the Jayhawks.”

Kansas’ next home football game is scheduled for Saturday, October 5, against Oklahoma. Last year the Jayhawks held their own against the Sooners in Norman, falling 44-55. You can only assume that with another strong crowd turnout at David Booth Kansas Memorial Stadium, the Jayhawks will feel supported, be excited to get out there in front of their home fanbase and fight to the end for another Kansas win.