I was standing on second base when the sky was starting to open up.

It was the softball gold medal match against Japan at the 2000 Olympics.

The stadium in Sydney, Australia, was completely sold out—15,000 screaming fans in the stands. It was so loud on the field—my mind, however, was so quiet.

I was at peace. The only thing I could hear were my teammates and the sound of the ball connecting with the bat before I took off running.

I ran as fast as I could, knowing I was about to score the lone run to win the gold medal for Team USA. I rounded third base and made a beeline for home. The blood, sweat, and tears—all of it was for that very moment. I closed my eyes and stepped across the plate.

Sign up for Jayhawks Extra email updates to receive exclusive stories on the Jayhawks in the Olympics.

The lead-up to that moment was like something out of a movie.

Just the whole atmosphere at the Olympic Games is hard to describe unless you’re there to experience it in person.

For two weeks, it was literally sports on steroids. Every time we stepped out onto the field just to warm up, my heart was beating out of my chest because of the electricity in the stands. The emotion, energy, and overall passion pouring out of fans was something to behold.

You could feel the weight of it all.

I had 12 people from my family make the trip to watch us compete. They really had never been out of the state of Texas, much less out of the country. It was an experience for them as well—a tremendous experience.

The tournament didn’t start well for us. We had lost three games in a row.

We couldn’t really make sense of it, you know? The US softball team wasn’t used to losing.

We had the best pitcher in the world, Lisa Fernandez. There was no rational explanation other than us being cursed. So we went back to the Olympic village and put together a séance. We gathered all of our jerseys into one big pile and cleansed them in the shower, while laughing hysterically.

No, we weren’t really cursed. But honestly, I think we just needed to go back to having some fun again. Especially now, when I think about it as a coach, I think we let the pressure get to us. You try to motivate student-athletes to play to the best of their ability, but you’re really at your best when you’re just enjoying the moment.

So that’s what we started doing. We took a breather, had some laughs and found a way to put that uniform back on the next day.

It wasn’t just the impromptu séance that shifted our focus as a team.

It was also the impromptu speech by USA baseball coach Tommy Lasorda. He was quite the motivator for anyone lucky enough to have ever spoken with him.

I remember we were leaving our house and getting ready to get on the bus, when he came out of the baseball house next door and hollered at us, “Girls, get over here.”

It’s hard not to get chills just thinking about that moment.

We hung on every word he said, and it stuck like glue. We left the village so fired up, knowing we could compete and actually win.

A pinch-run to home

That speech awakened something within all of us—from the top player on the roster all the way down to the lone utility player.

You see, what people don’t know is we only had 15 players in Australia, and five of those players were pitchers. So that really left ten other position players.

Well, if you’ve got nine on the field and four pitchers in the bullpen, I was kind of our one true utility player on the team. My versatility in being able to play multiple positions got me on the Olympic team. My coach could play me in a lot of different places as opposed to some of my teammates.

I was just so fortunate to be on a team with some of the best players in the world.

I didn’t start every game, including the championship game, but I was always ready to contribute in any way possible when my name was called.

When my coach called my name that day, I was already out of the dugout with my helmet on to pinch run. It was the bottom of the eighth inning against Japan, and I was on second base. Once the bat made contact, I took off for the game-winning run.

I remember opening my eyes after crossing home plate and thinking to myself, “Oh my God. We just won!” My teammates came running out of the dugout, and we all just tackled each other and celebrated.

I grabbed the flag and ran around the outfield, and the first thing I did was stop in front of my family. I can picture it like it was yesterday. They were in the right-center field blowing kisses and just so thankful to share that moment with me.

But it wasn’t just about me. It was about them and all of the teammates and coaches that have ever pushed me to have that opportunity.

Sounds a bit cliché, I know, but we really did play for the name across our chest, not the one across our back.

Being able to come in and help my team win probably means more to me now as a coach because I was a player that was used to playing and starting in every game. But players don’t get to start and play in every game, especially at a really high level. You have to learn the importance of your role and be ready to go when your name is called.

At the end of the day, people don’t look at it like, “Oh, McFalls didn’t start.” No, it’s “McFalls came in and scored the winning run.”

It was a team effort, and I had tremendous teammates. We played for each other and were determined to find a way to win.

We’ll forever have a bond between us.

From player to coach

There was something about that moment that made me want more.

I guess I realized I had more passion for the sport than I ever even imagined. But honestly, just seeing the excitement in the world for softball ignited something in me. Fans would be waiting for us to arrive in the parking lot several hours before our games.

There was just so much energy. Little girls were dreaming of meeting us and becoming Olympians. We really got to share a story and touch so many lives.

I love working with student-athletes and making them feel better about what they’re doing. I believe all of that made me realize I had a gift for coaching.

My strength, even to this day, isn’t so much about what I know about the game. It’s about building relationships, and it’s about student-athletes trusting the process and trusting in me. It’s about hoping they leave the program knowing they’re better people, teammates, and players than when they got there. 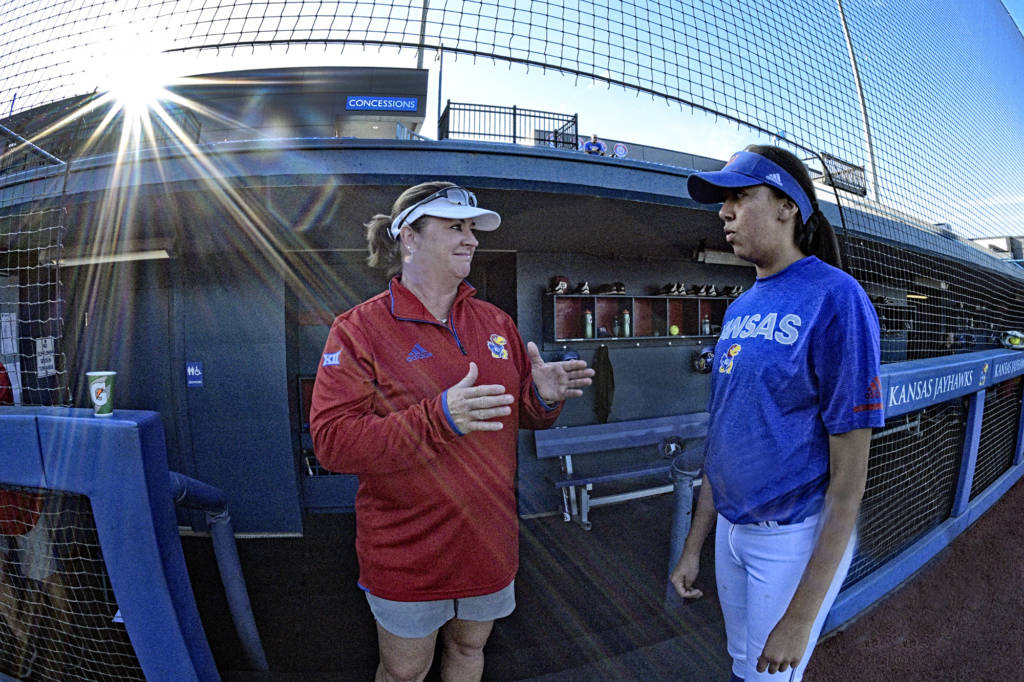 I did the coaching rounds before I got my first Power Five head coaching opportunity at the University of Kansas.

As a head coach, I’m more of a manager in making tough decisions I didn’t have to make as an assistant. But I’m also kind of a natural leader. So I don’t think that’s ever really been an issue for me.

Most importantly, it’s a blessing to work with young women that really want to be here for four years and get their degree. However, being a Division I athlete and committing to KU is not a four-year commitment. It’s a lifetime commitment. It’s something that will be with you for the rest of your life.

It will be what you hang on your walls. It will be in those forever-long relationships you build with alumni. My Texas A&M degree is hanging on a wall in my office as I speak.

Just looking at it brings back so many memories.

It’s great that I’m a Division I Power Five coach because I get to see a lot of these young players develop and move on to play at that next level, while quietly thinking to myself, “That athlete has a chance to be an Olympian someday.”

It’s kind of fun, and it’ll be great to see what happens with the 2021 Olympic team. I know one thing is certain: I’ll be front and center of a television wearing my USA t-shirt—forever a proud Olympian with my own little place in history.

Sign up for Jayhawks Extra email updates to receive exclusive stories on the Jayhawks in the Olympics.