🏈 Kansas Becomes Bowl Eligible for the First Time Since 2008

LAWRENCE, Kan. – The Kansas Jayhawks became bowl eligible for the first time since 2008 with a 37-16 win over No. 18 Oklahoma State on Saturday afternoon at David Booth Memorial Stadium. The win is Kansas’ first against a ranked opponent since 2010, breaking a streak of 44-straight losses to ranked teams.

"“I’m so happy for the guys that have been through a lot during their time. To see the locker room the way it is celebrating and so happy and for all the times it’s been tough…It says a lot about them. I’m happy for the fans and the staff, but for those guys that have worked through it in that group to play so well today, I’m proud.”"

On Oklahoma State’s first drive of the game, the Cowboys pushed the ball down the field 40 yards, however, cornerback Cobee Bryant, who missed the team’s most recent game against Baylor with an injury, intercepted a Cowboy pass to give the Jayhawks the ball on the Kansas 27 yard-line.

The Jayhawks didn’t waste any time getting into the endzone on their first drive. Led by Quarterback Jason Bean, Kansas went 73 yards on four plays in 1:32 to get on the scoreboard first. Neal ran for 55 yards, including a 31-yard touchdown rush into the right side of the endzone.

“Devin made a lot of plays in the passing and running game,” Leipold said. “It was the most physical he ran, as well. We’re going to need that.”

OSU started their second drive on their own 25 yard line, however, an interception by cornerback Ra’Mello Dotson ended the short drive. Dotson intercepted the ball at the Kansas 32-yard line and returned it 13 yards to put the Jayhawks on their own 45 yard line. The interception was Dotson’s second of the season. Nearing the end of the first quarter, the Jayhawks pushed the ball down the field 76 yards on 16 plays with the drive being capped with a 21-yard field goal by kicker Jacob Borcila.

The Jayhawk defense was able to keep Oklahoma State shutout in the first quarter, but the Cowboys were able to get their first score of the game in the second quarter. The Jayhawks, however, responded fast with a 49 second scoring drive. Bean rushed for a career-high 73 yards up the left side of the field for a Kansas touchdown. 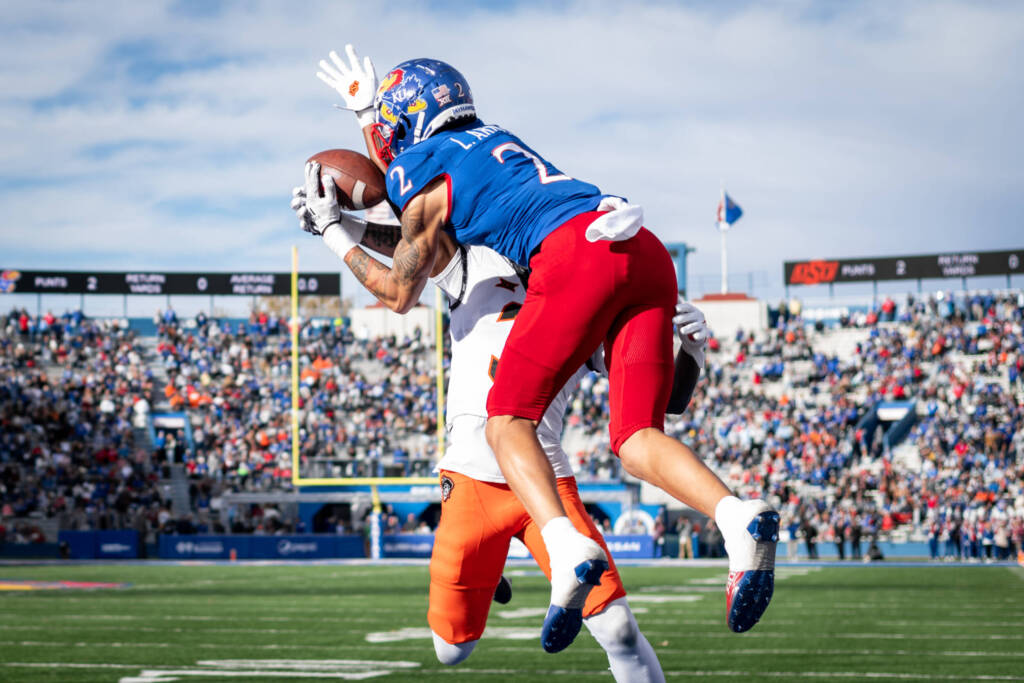 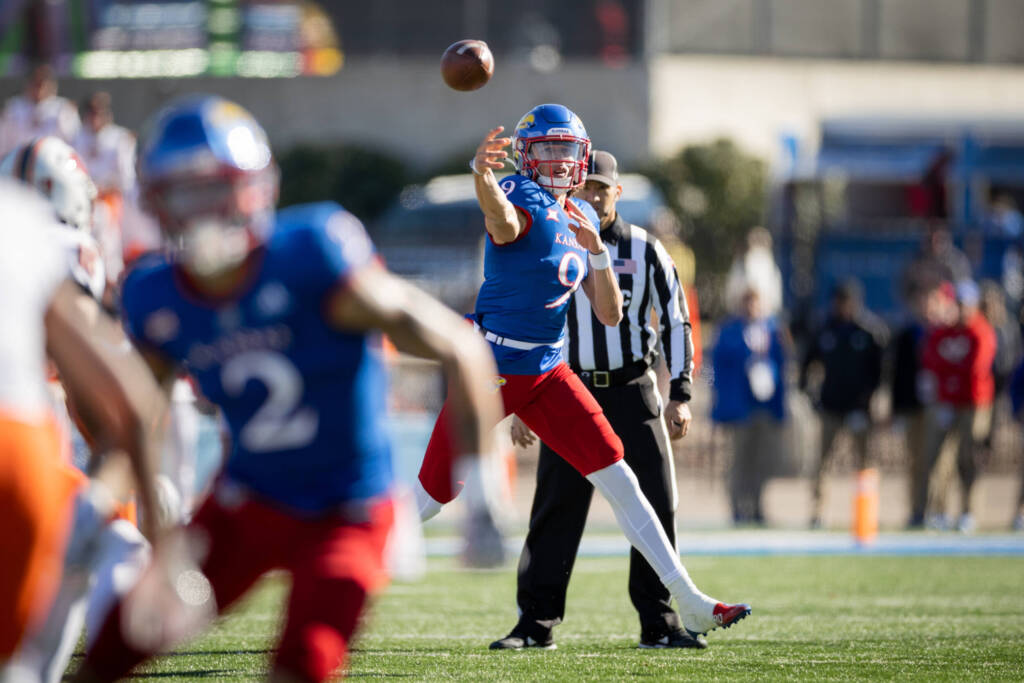 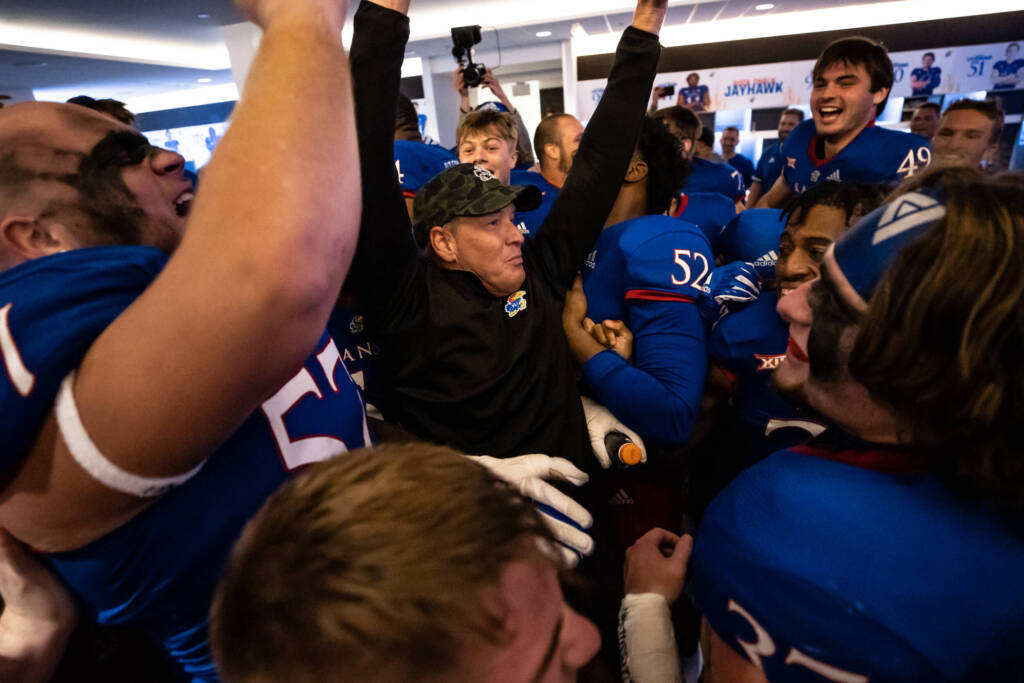 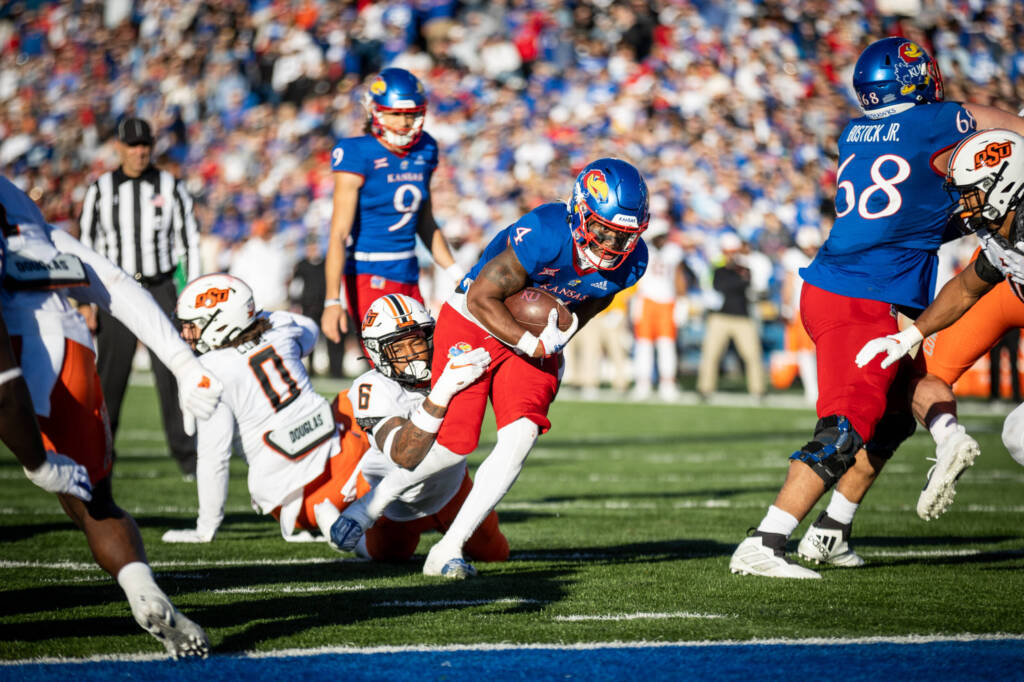 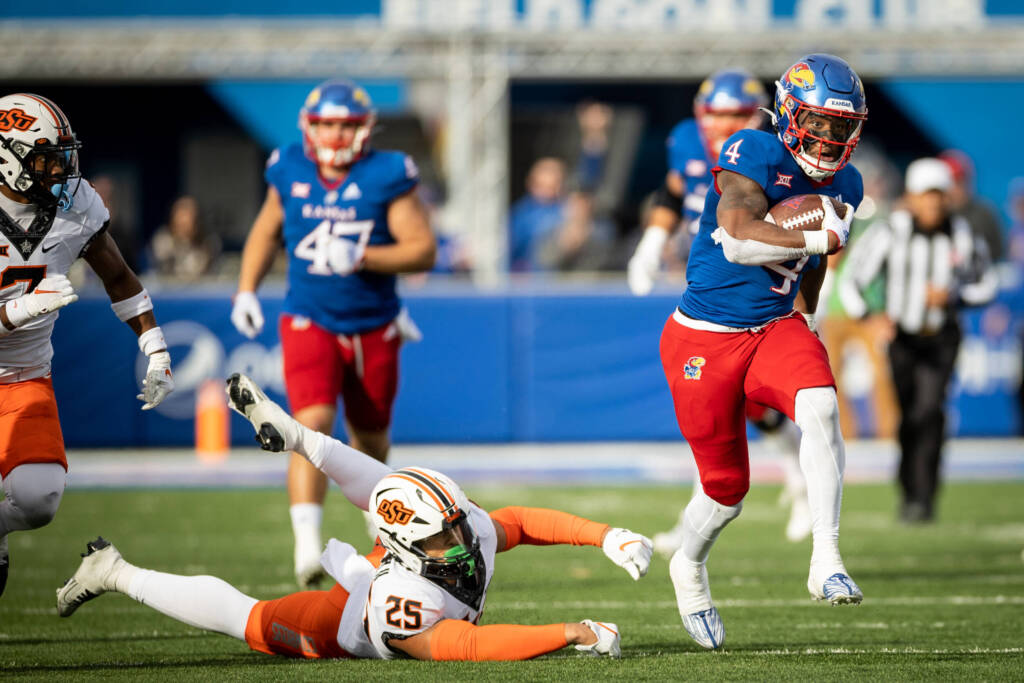 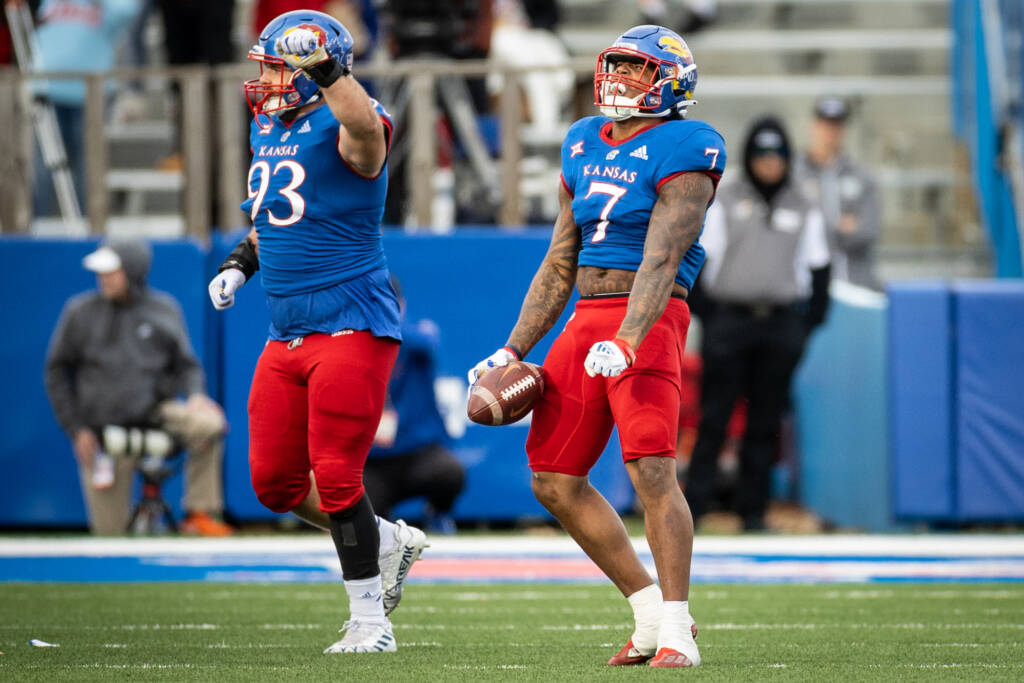 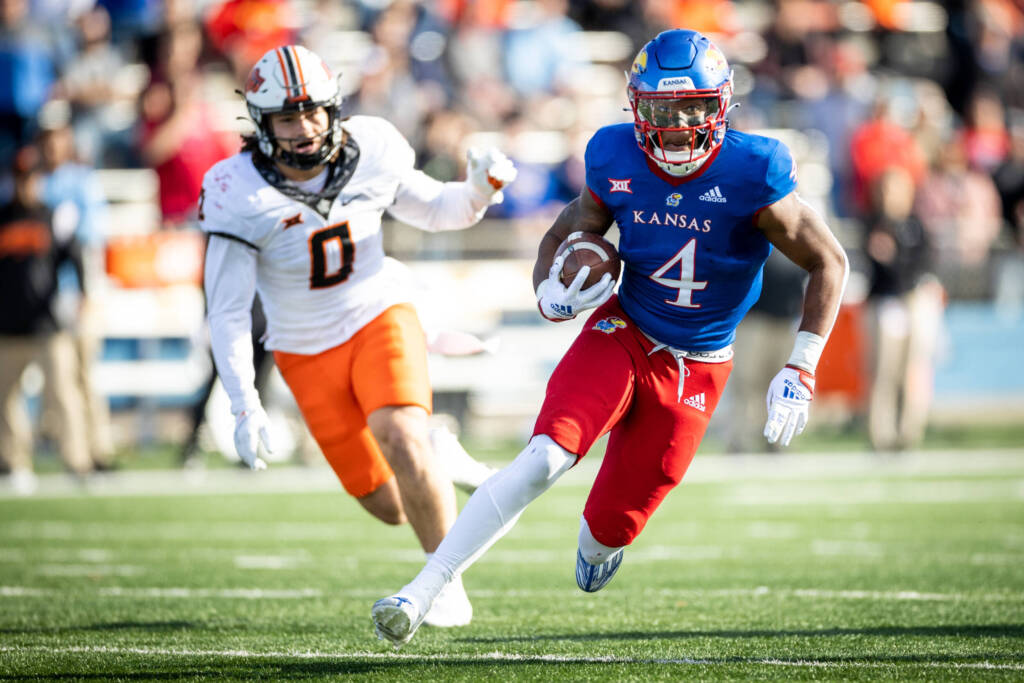 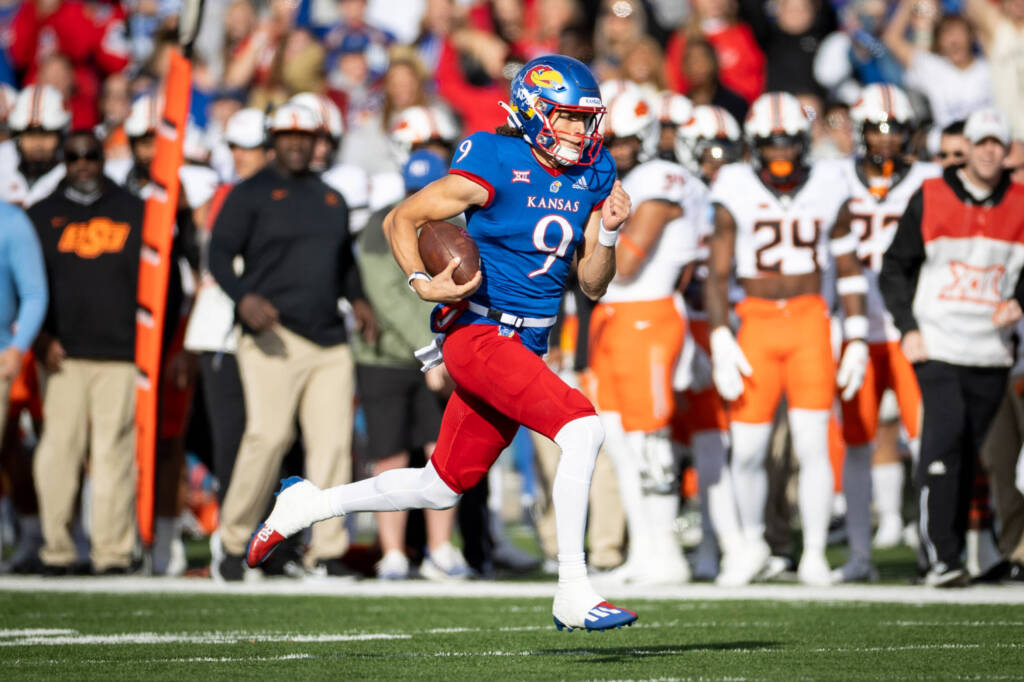 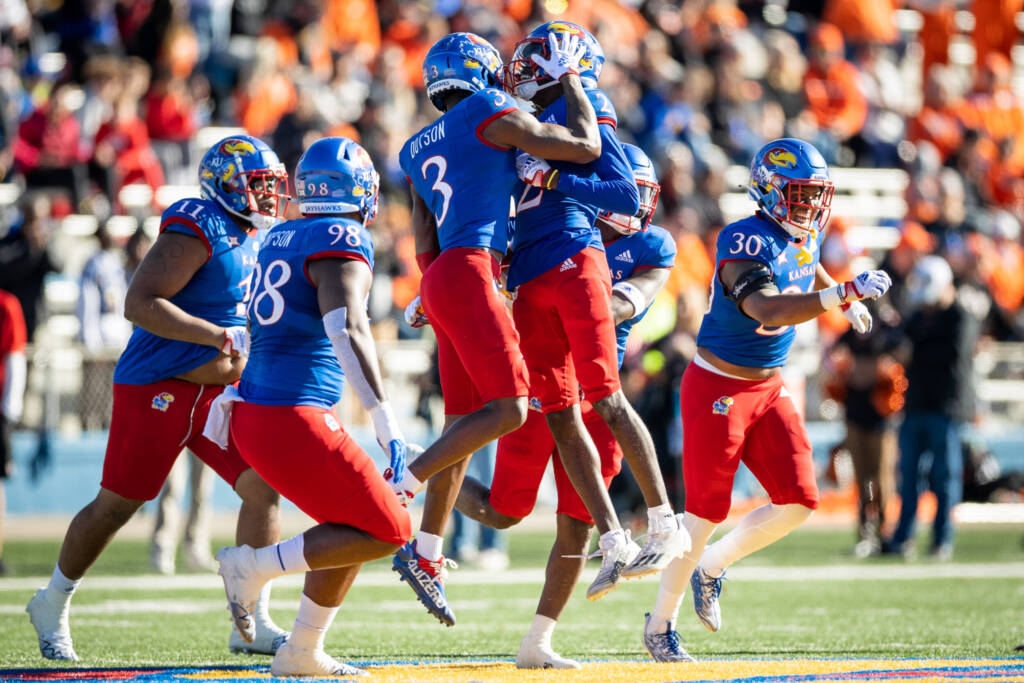 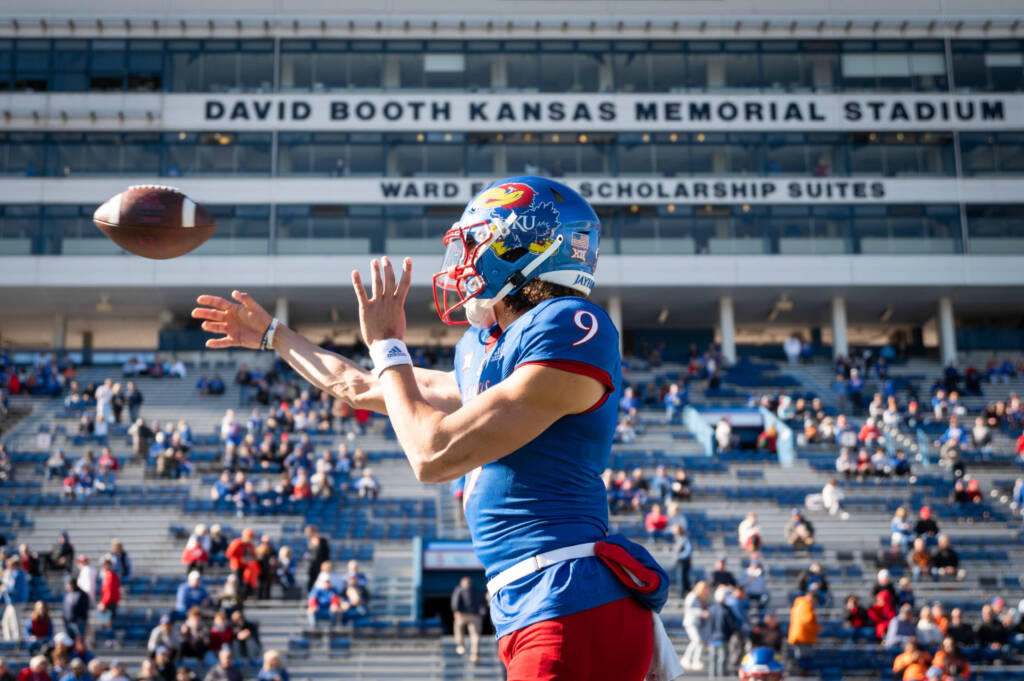 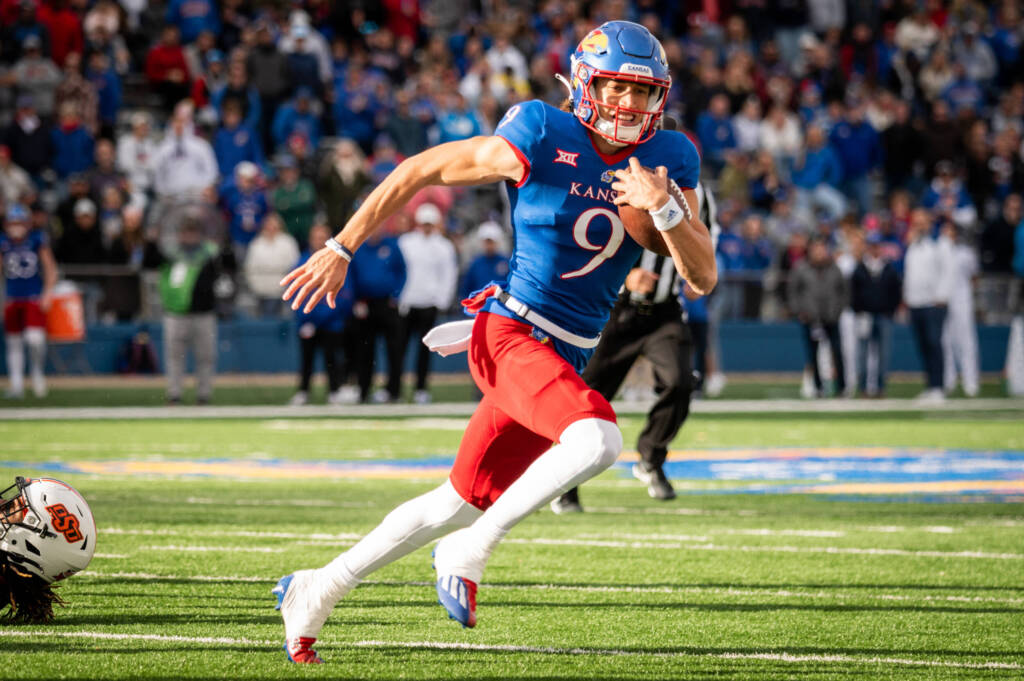 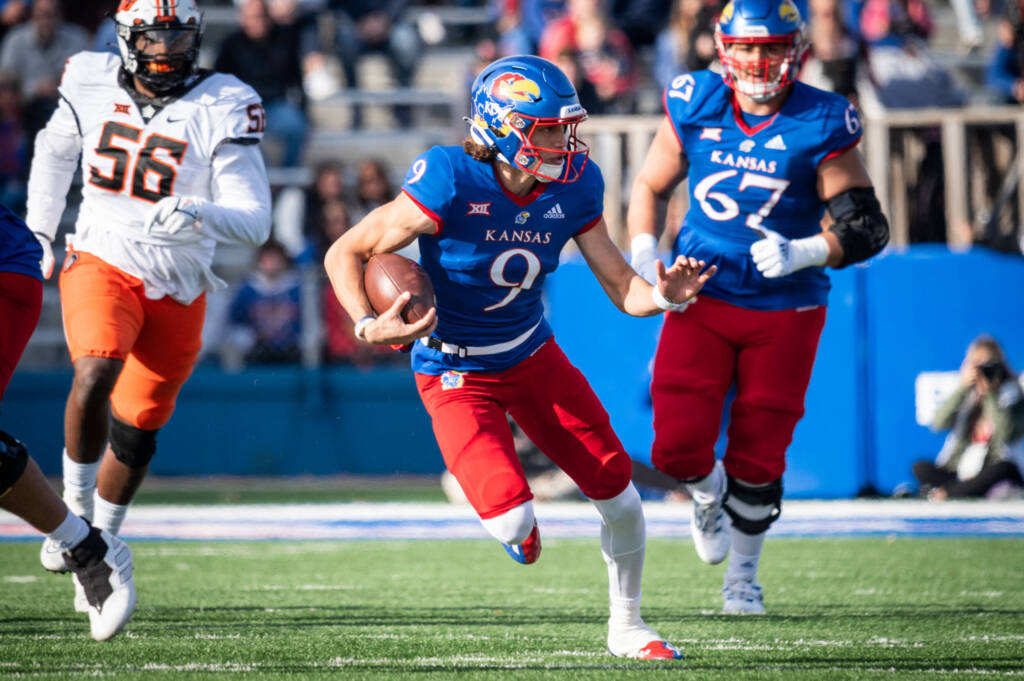 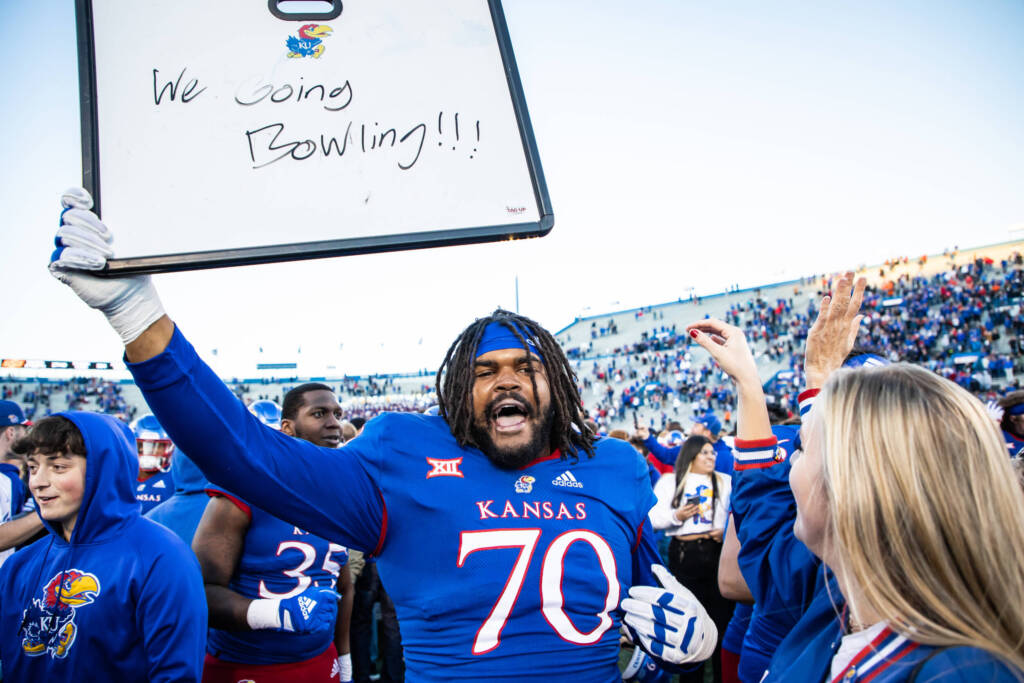 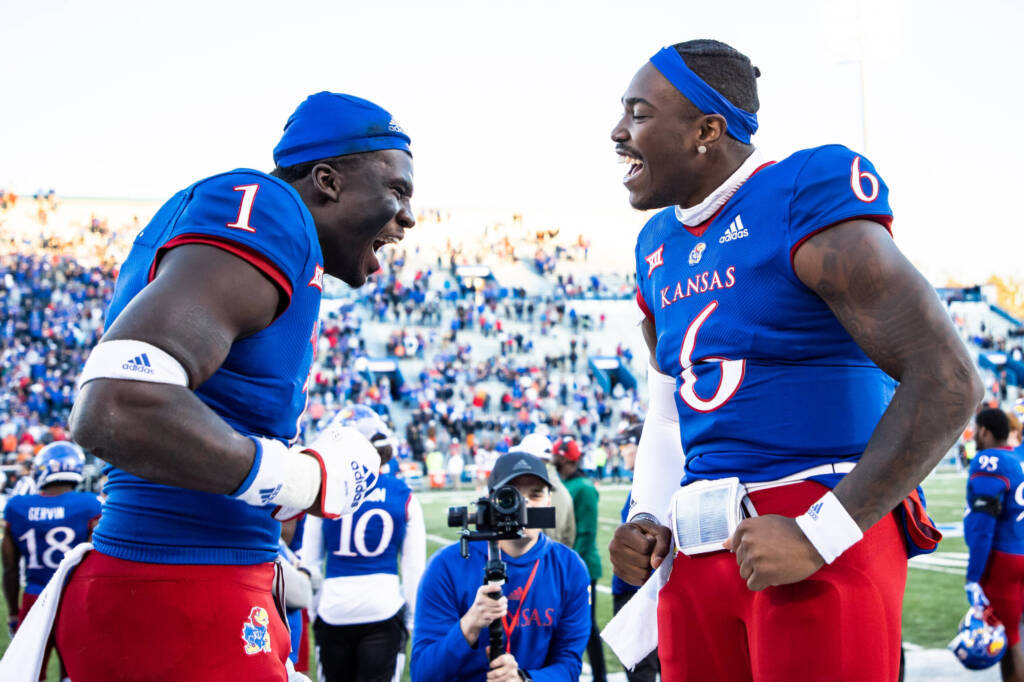 Kansas ended a 47-yard OSU drive, with a fumble recovery by Lorenzo McCaskill. Kansas took advantage and responded with an 87-yard scoring drive. Lawrence Arnold caught an 8-yard pass from Bean in the left corner of the endzone over an OSU defender.

Jared Casey caught the first touchdown of the second half on a 2-yard pass in the back of the end zone from Bean. The score capped a fifteen-play, 75-yard drive that took 7:08 off the clock.

The Cowboys remained scoreless for the rest of the game, while Kansas recorded another 3 points off a 31-yard field goal by Borcila. The Jayhawks tallied their third interception from Rich Miller, who returned it 34 yards to ice the game.

Bean finished 18 for 23 for 203 yards, two touchdowns and no interceptions. He also rushed for 93 yards and a touchdown on four carries. Receiver Luke Grimm established a new career high with seven catches for 65 yards. Kenny Logan Jr., led the Jayhawks with eight tackles. Jereme Robinson finished with two tackles-for-loss, while Bryant had an interception, two pass breakups and a ½ tackle-for-loss.

The Jayhawks will now go for their seventh win on Saturday, Nov. 12 at Texas Tech. Kickoff is scheduled for 6 p.m., and will be streamed by Big 12 Now on ESPN+.