LAWRENCE, Kan. – The 2020 NFL Draft is scheduled for April 23-25. Kansas has 15 members of the 2019 roster that participated in KU’s Pro Day on March 5, each week the Jayhawks are highlighted  and this week Carter Stanley, Najee Stevens-McKenzie and Bryce Torneden are the Jayhawk Spotlight. 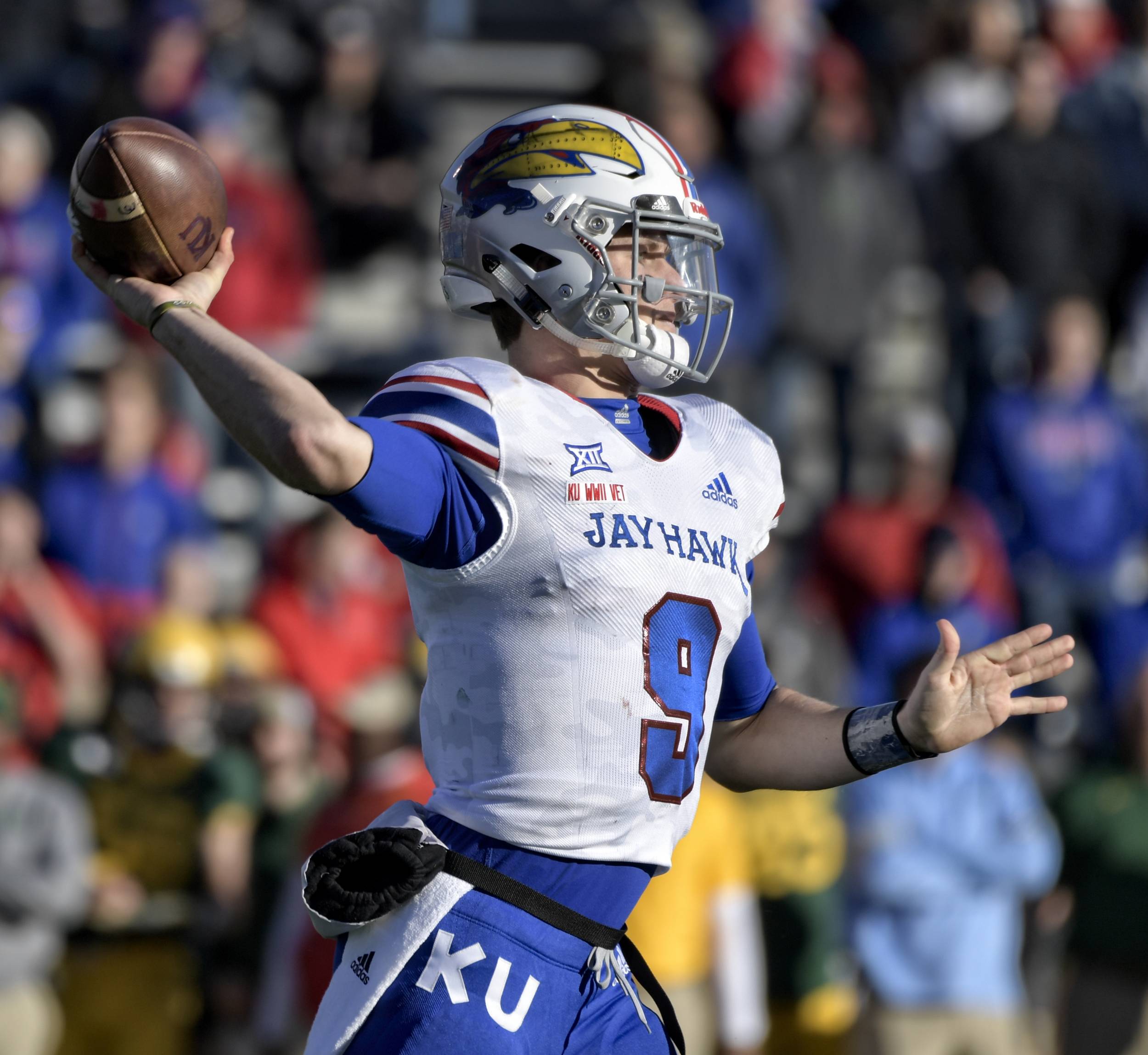 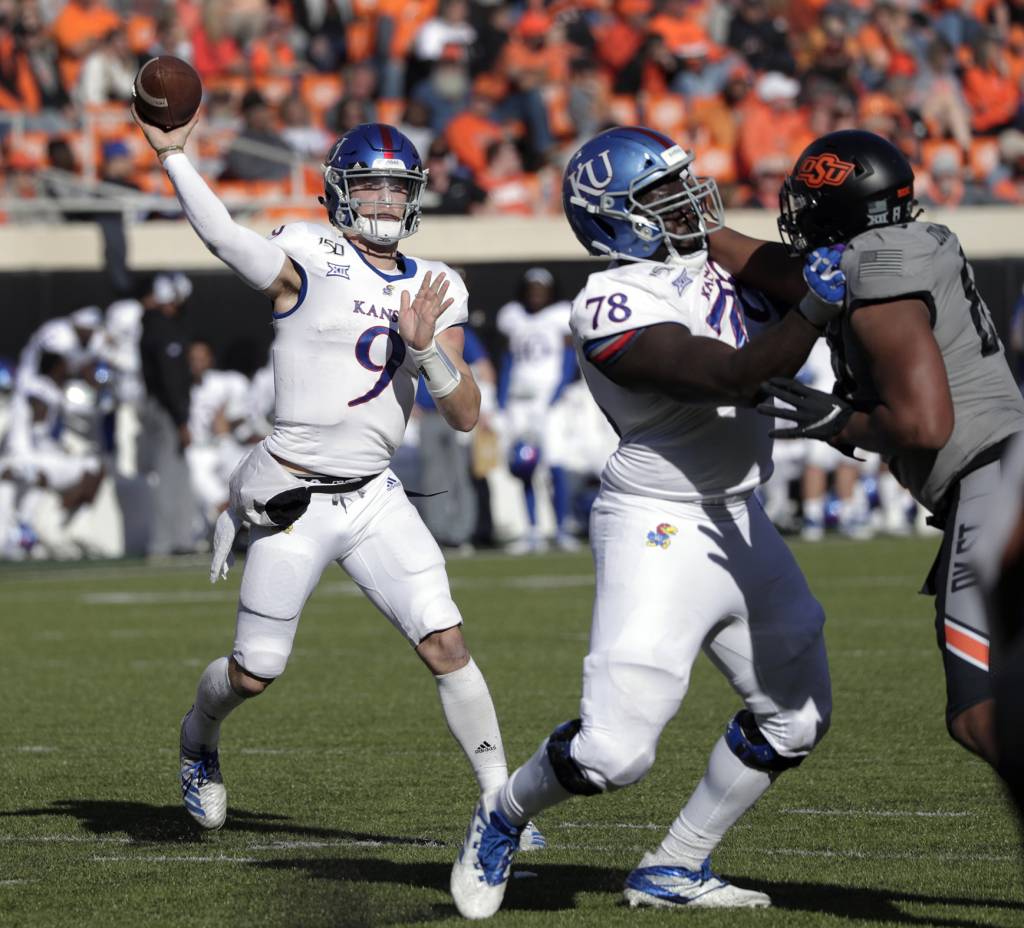 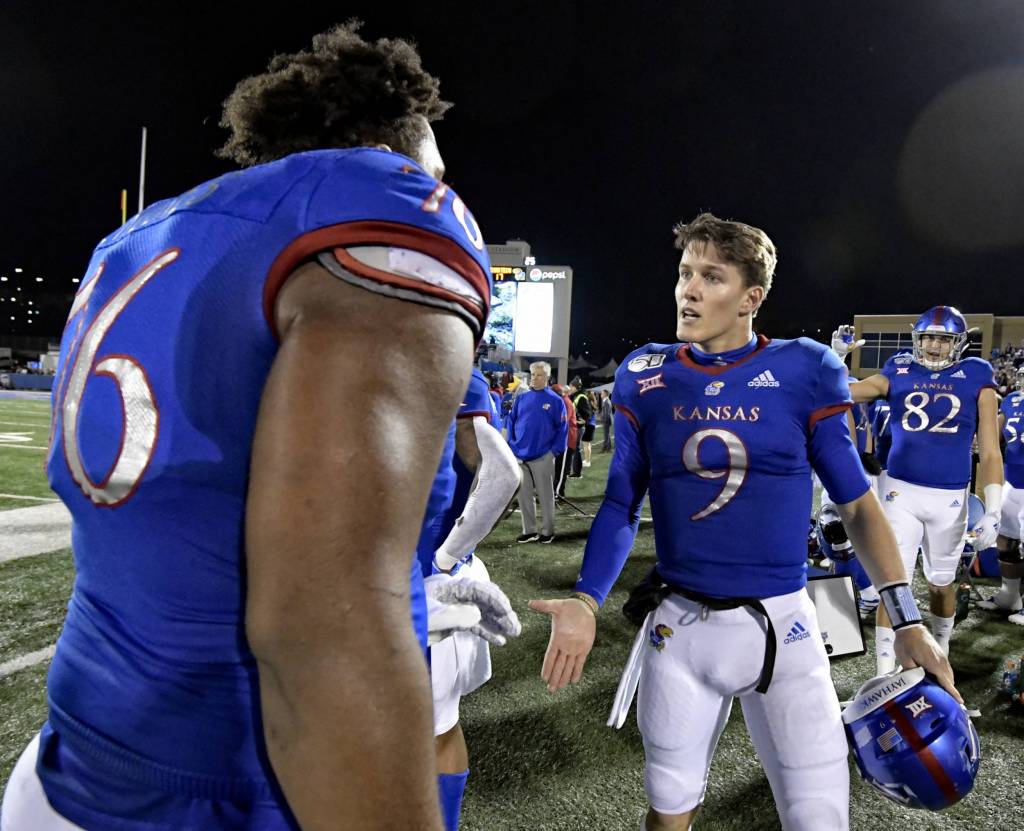 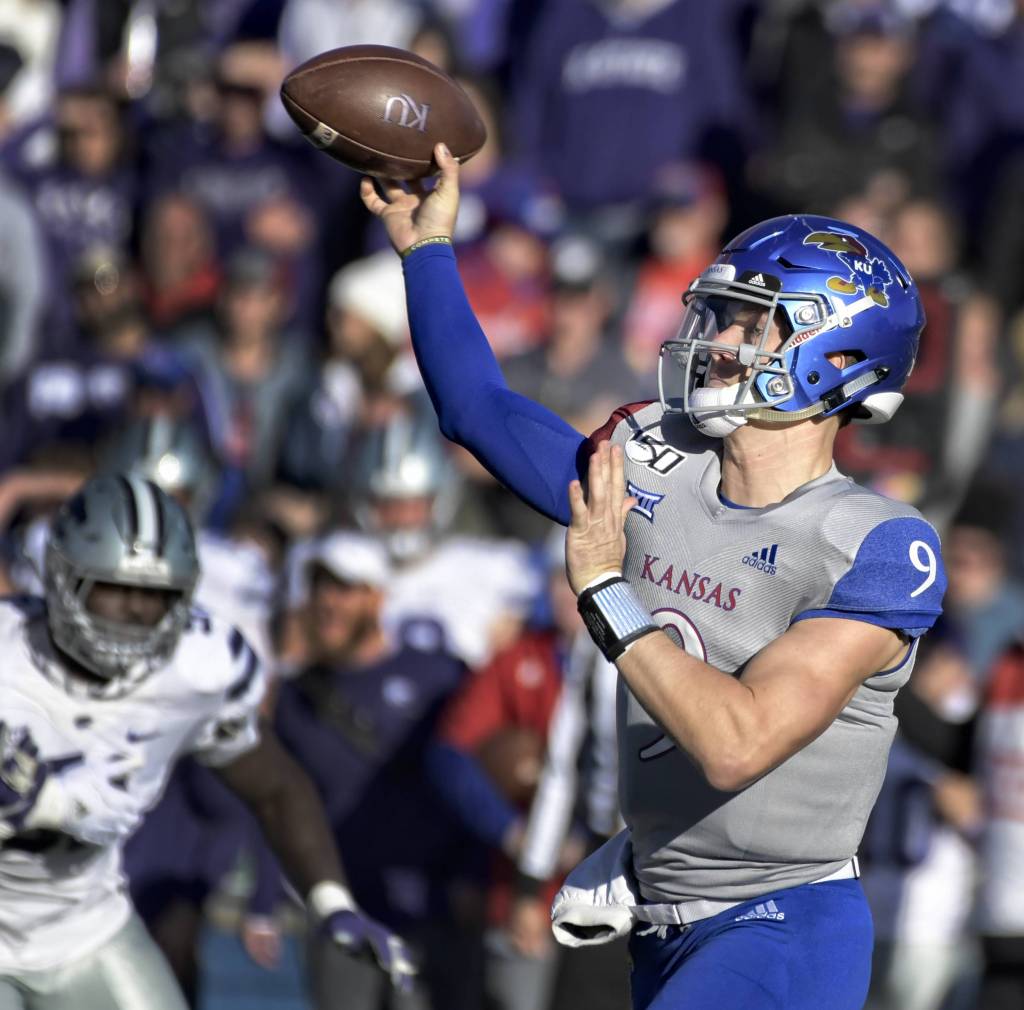 2019 (Sr.): Indiana State: Completed 20-of-29 passing attempts for a total of 241 yards in the air and two passing touchdowns … Led the Jayhawks down the field for a game-winning drive late in the fourth quarter, completed by a 22-yard touchdown pass to Daylon Charlot … Coastal Carolina: Started at quarterback for the second-straight game … Converted on 13 of his 19 passing attempts for a total of 107 yards … at Boston College: Led the team to victory in Chestnut Hill by going 20-of-27 through the air for 238 yards, and three touchdowns, with just one interception … Carried the ball five times for 23 additional yards … Named one of eight Manning Award Stars of the Week by the AllState Sugar Bowl after his performance in Kansas’ dominating win over the Eagles, the Jayhawks’ first road victory over a Power-5 opponent since 2018  … West Virginia: Completed 19-of-25 pass attempts for 275 total yards … Threw three touchdown passes, which tied his career best at Kansas … Connected with junior wide receiver Andrew Parchment in the third quarter for a 75-yard TD, the longest scoring play of the 2019 season for the Jayhawks … at TCU: Connected with sophomore RB Pooka Williams Jr., for a 25-yard touchdown reception late in the fourth quarter … That particular pass was also his longest completion of the day … Oklahoma: Matched his career best of three touchdowns through the air (one to Daylon Charlot in the first quarter and a pair in the fourth quarter to Stephon Robinson Jr.) … Completed 18-of-28 passes on the day, good for 230 total yards … at Texas: Accumulated 65 yards rushing on the night, good for a career best … His nine carries marked new season high … In addition, his long rush of the night, which went for 36 yards, matched the longest of his KU career … Set numerous season highs against the Longhorns by going 27-of-47 through the air for 310 yards and four touchdowns … Both his pass attempts and completions were new bests (previously 29, twice, and completions, 20, also twice), as were his yards (previously 275) and TD passes (previously three, three times) … When he connected with sophomore WR Takulve Williams for a 7-yard touchdown in the second quarter, it put the Jayhawks ahead on the scoreboard, 17-14, which marked Kansas’ first lead in Austin since 1997 … Texas Tech: Threw for a season high 415 yards in the Jayhawks’ Homecoming victory … Completed 26 of his 27 attempts on the night, with three touchdowns and just one interception … Rushed the ball six times for a net gain of one yard and one touchdown … Kansas State: Went 13-of-23 for 115 yards against the Wildcats, with two interceptions … Also carried the ball on five occasions, but was stopped for negative net yards on the afternoon … at Oklahoma State: Threw his 34th career touchdown pass to Stephon Robinson Jr., in the fourth quarter… The Jayhawks’ starting quarterback for the 10th time this season … Completed 22-of-27 passes on the afternoon, good for 226 yards and two touchdowns through the air … Ran the ball seven times for six total yards against the nationally ranked Cowboys … at Iowa State: Surpassed David Jaynes to claim sole possession of second place in most career passing touchdowns in KU history with 37 with his touchdown pass to Stephon Robinson Jr., in the fourth quarter … The only person with more passing TDs in Kansas football history is Todd Reesing (90) … Completed 23 passes of his 44 attempts in Ames for a total of 328 yards through the air … Also threw three touchdown passes on the afternoon … Baylor: Attempted 23 passes in the first half of play to surpass Kelly Donohoe (745) and David Jaynes (754) on the KU career pass attempts all-time charts … Entered the game with 733 pass attempts, so he began the second half of play with 756 career pass attempts in his KU career … Became just the fifth Jayhawk in Kansas history to throw for 5,000 or more career yards on Senior Day. 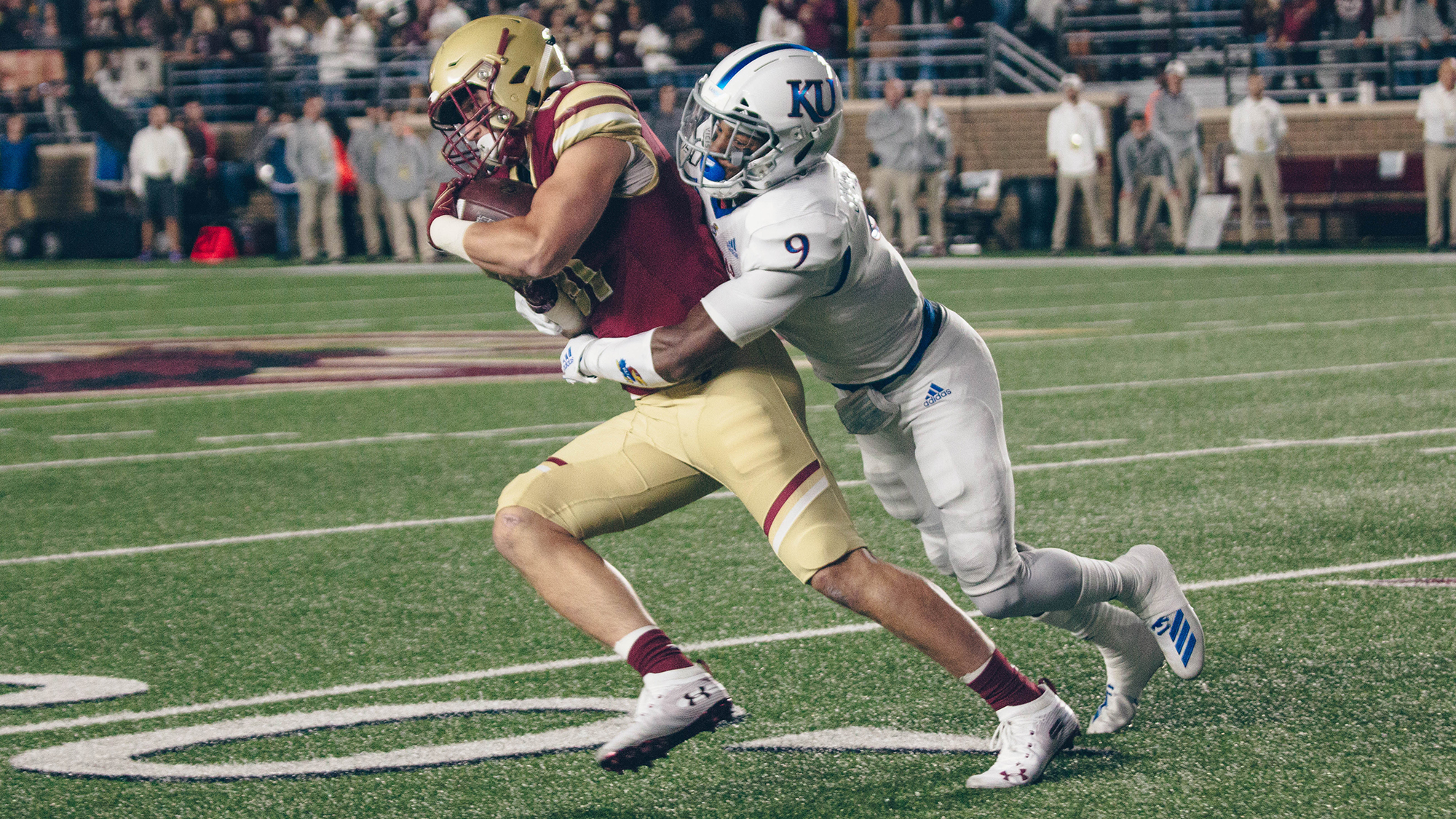 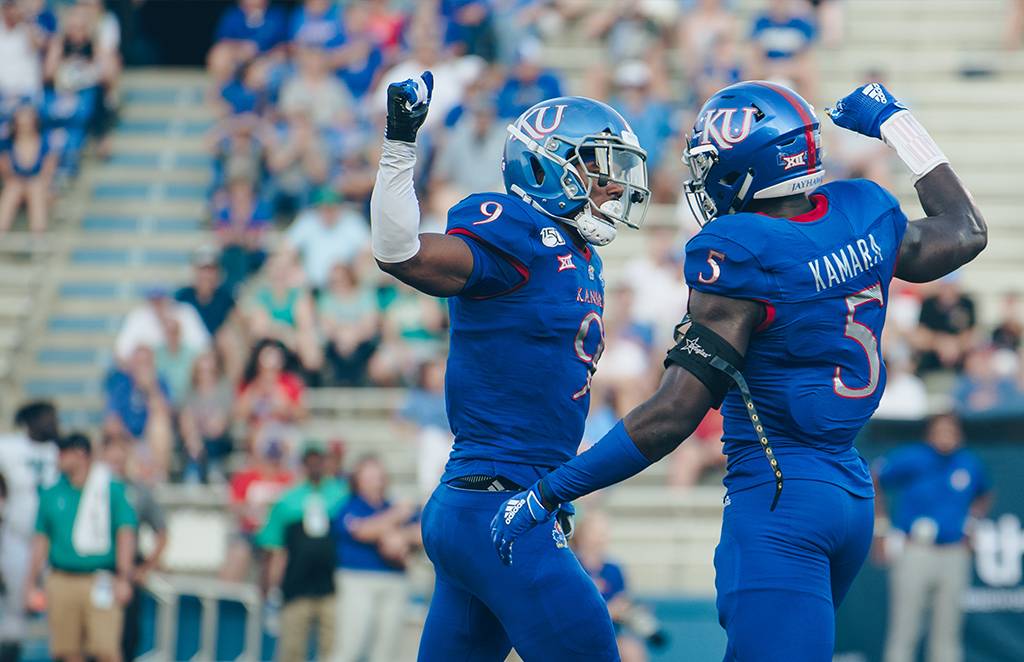 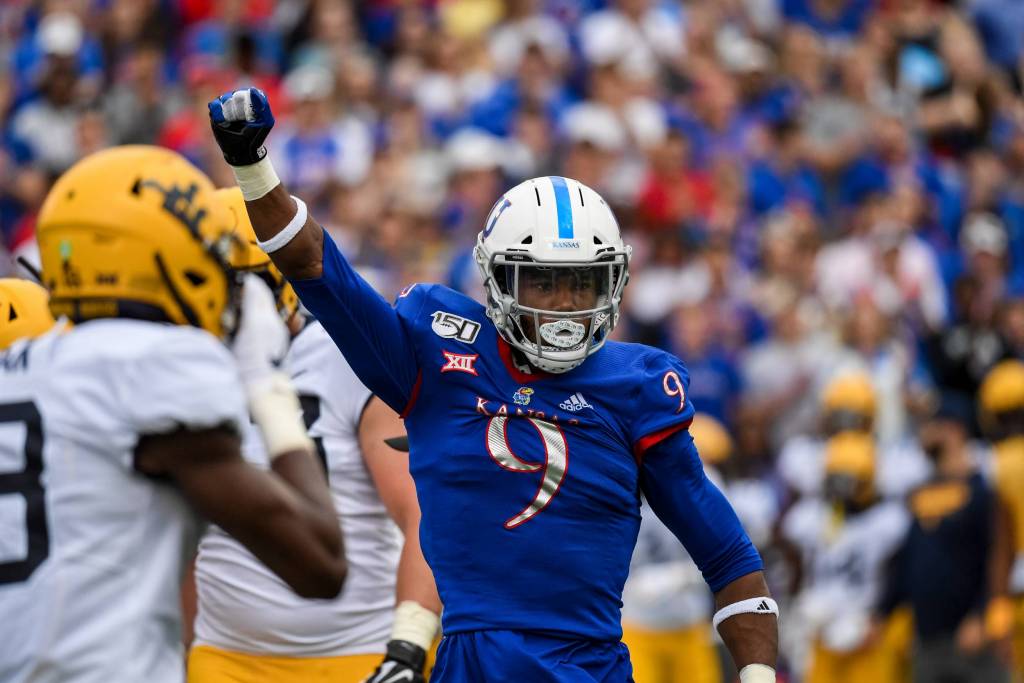 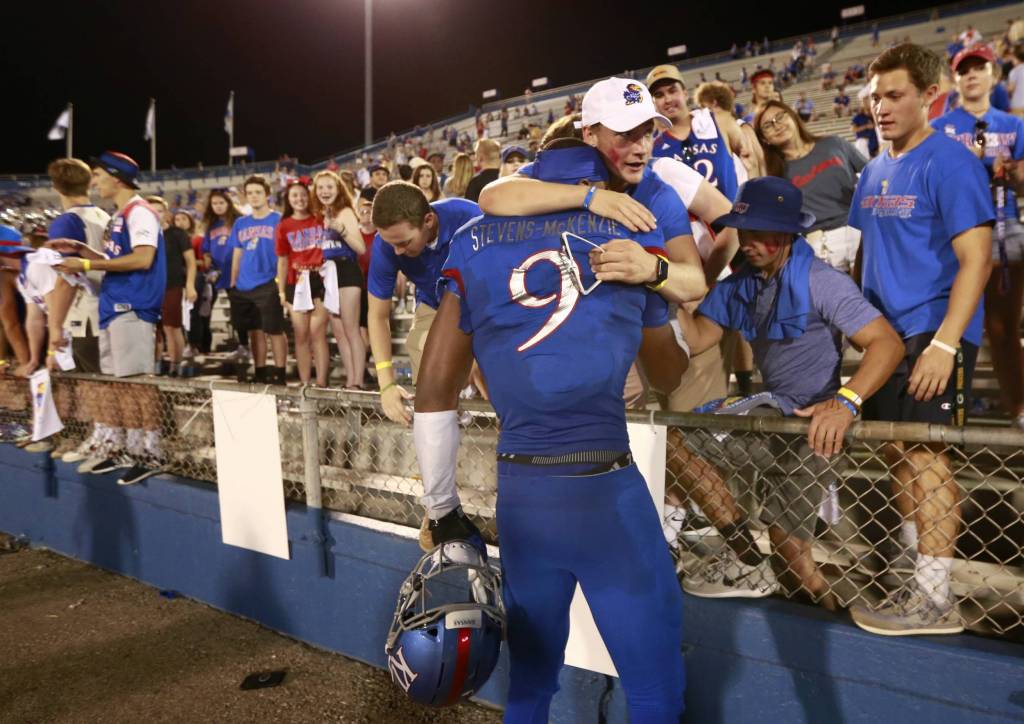 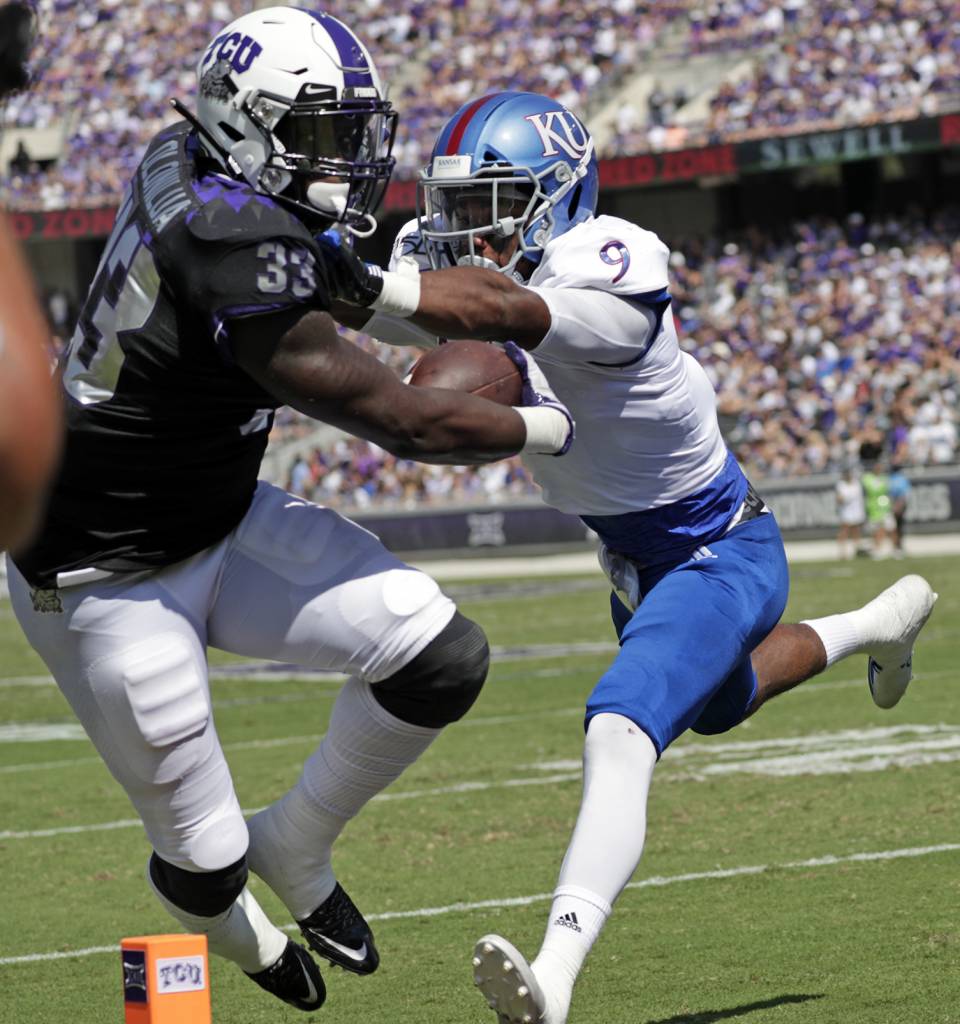 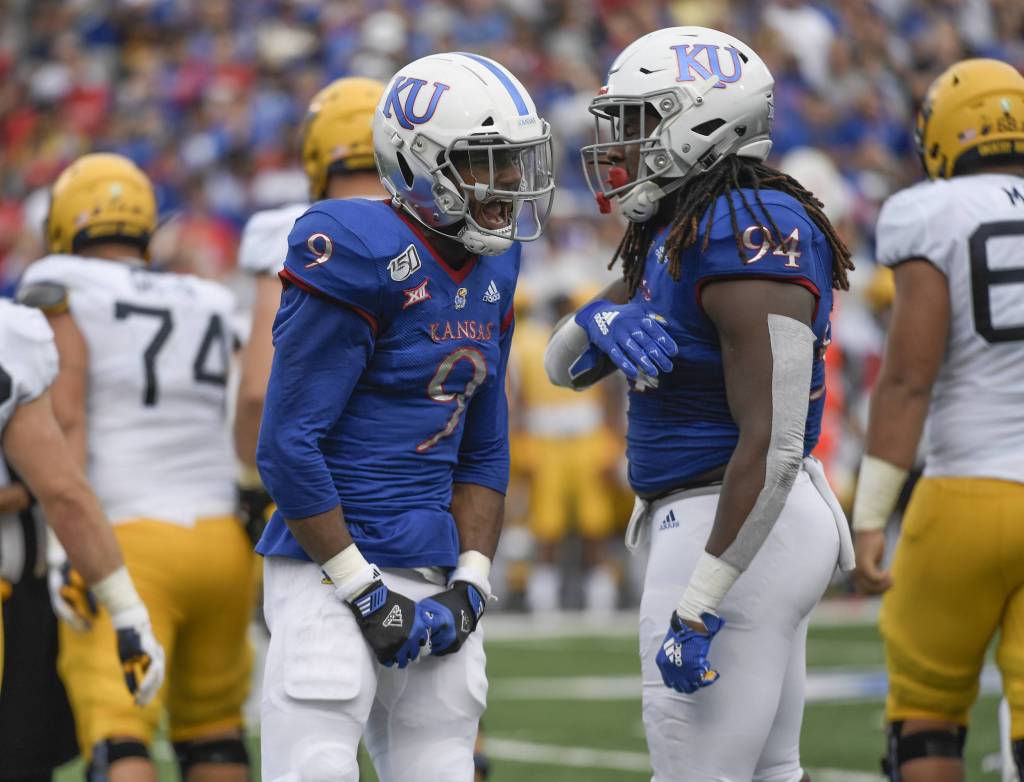 2019 (Sr.): Indiana State: Saw playing time but did not record any stats … Coastal Carolina: Contributed three solo tackles to the Jayhawks’ defensive effort against the Chanticleers … Also had two tackles-for-loss (TFL) … at Boston College: Made his first start of the season at linebacker in Chestnut Hill … Tallied five tackles (two solo, three assisted against the Eagles, a new career high … Also recorded one TFL of two yards … West Virginia: Made a then-career high five tackles against the Mountaineers … Credited with 0.5 sack for a loss of three yards, another Kansas career best … Also registered 1.5 TFLs for a loss of four WVU yards … at TCU: Set a new career best at KU in tackles with a total of six (five solo, one assisted) … Oklahoma: Picked off one of Jalen Hurt’s passes at the beginning of the fourth quarter, which tied his Kansas career high … Made two solo tackles against the Sooners … at Texas: Picked off his first pass of the season in the fourth quarter, good for his third interception as a Jayhawk … Returned the INT two yards … Also contributed four solo tackles against the nationally ranked Longhorns to help lead KU’s defensive effort in Austin … Texas Tech: Matched his season and career highs in tackles with six (all solos) in the Jayhawks’ 37-34 Homecoming win over the Red Raiders … Also broke up the first pass of his season and KU career … Kansas State: Made two solo stops on defense for KU in the annual Dillons Sunflower Showdown … at Oklahoma State: Recorded a pair of solo tackles against the nationally ranked Cowboys in Stillwater … Also had one TFL for an OSU loss of two yards … at Iowa State: Tallied four total tackles (three solo and one assisted) against the Cyclones … Also had 1.0 TFL in Ames (for a loss of two yards) … Baylor: Closed out his Kansas career with four tackles against the nationally ranked Bears, three solo and one assisted … Also registered 1.0 TFL for a loss of two yards. 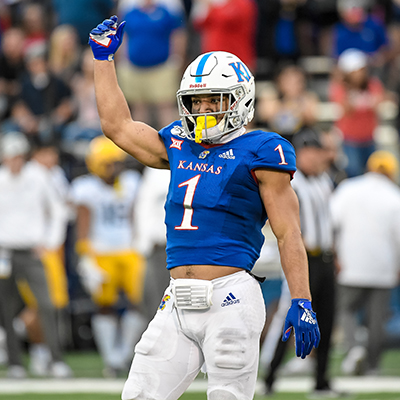 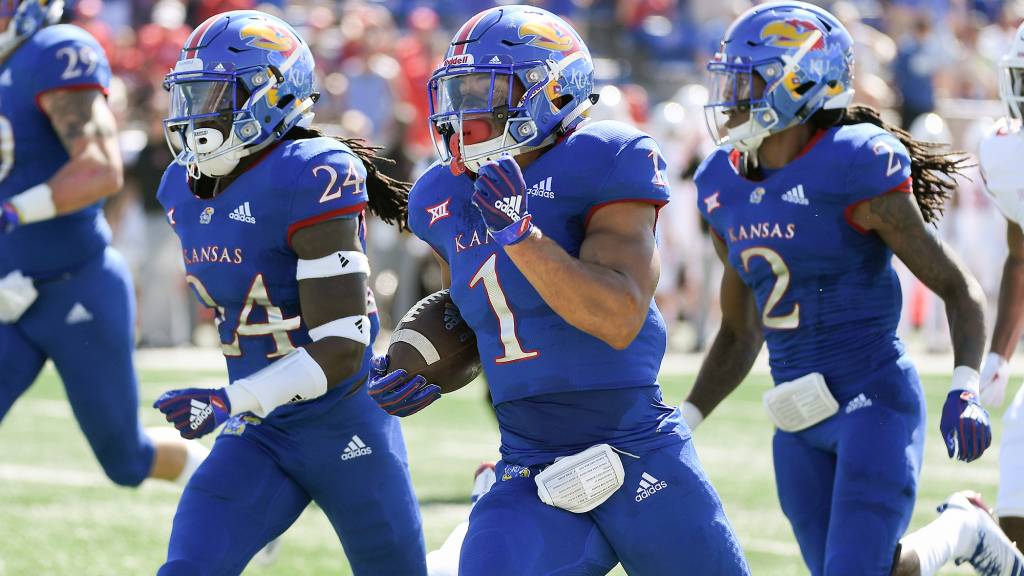 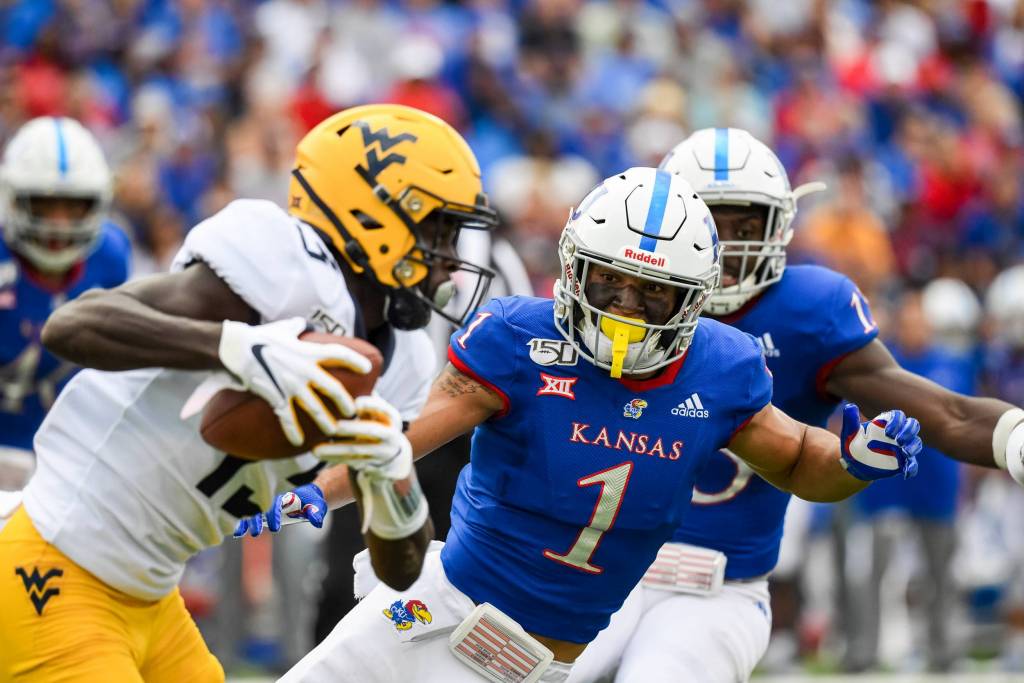 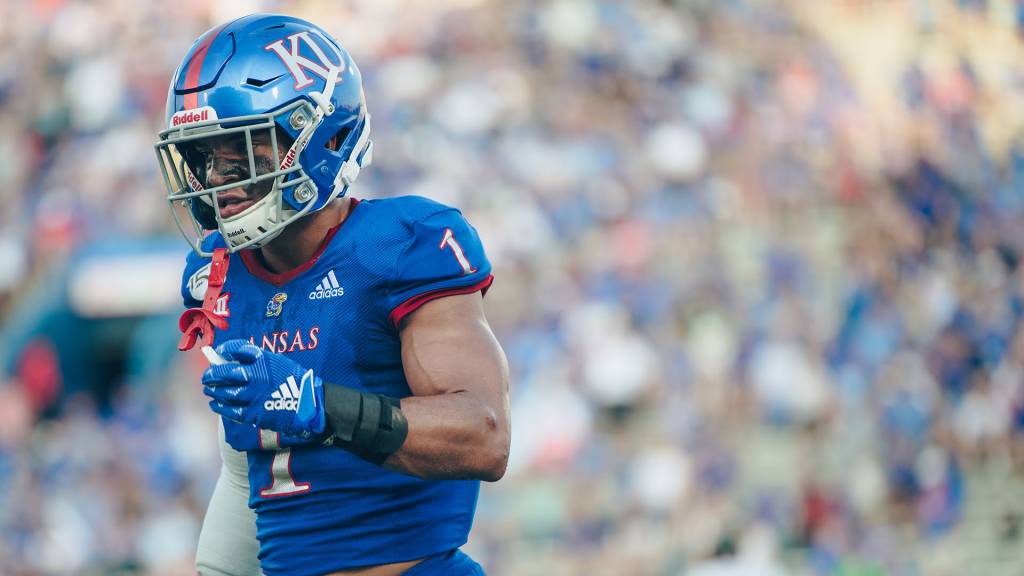 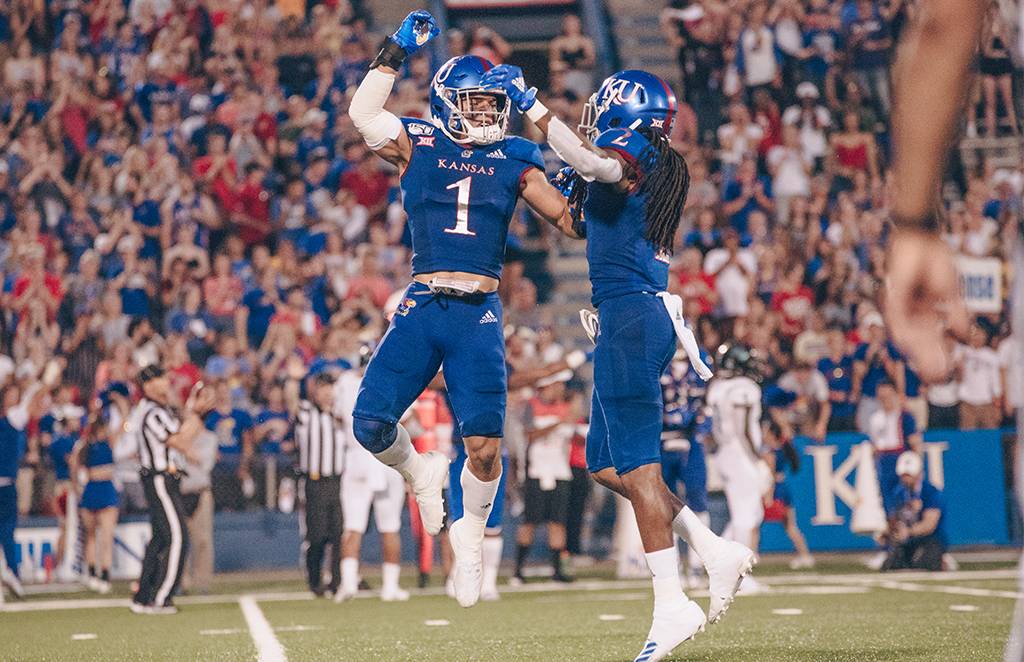 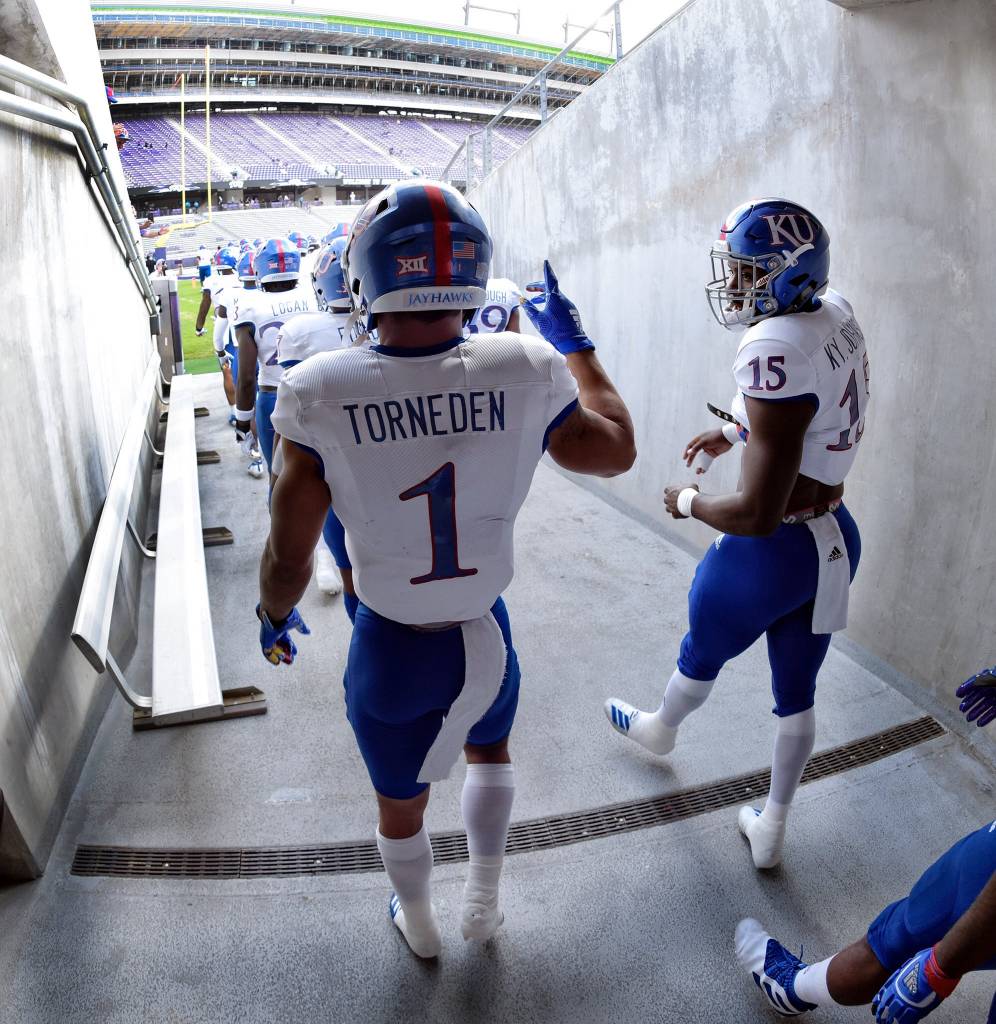 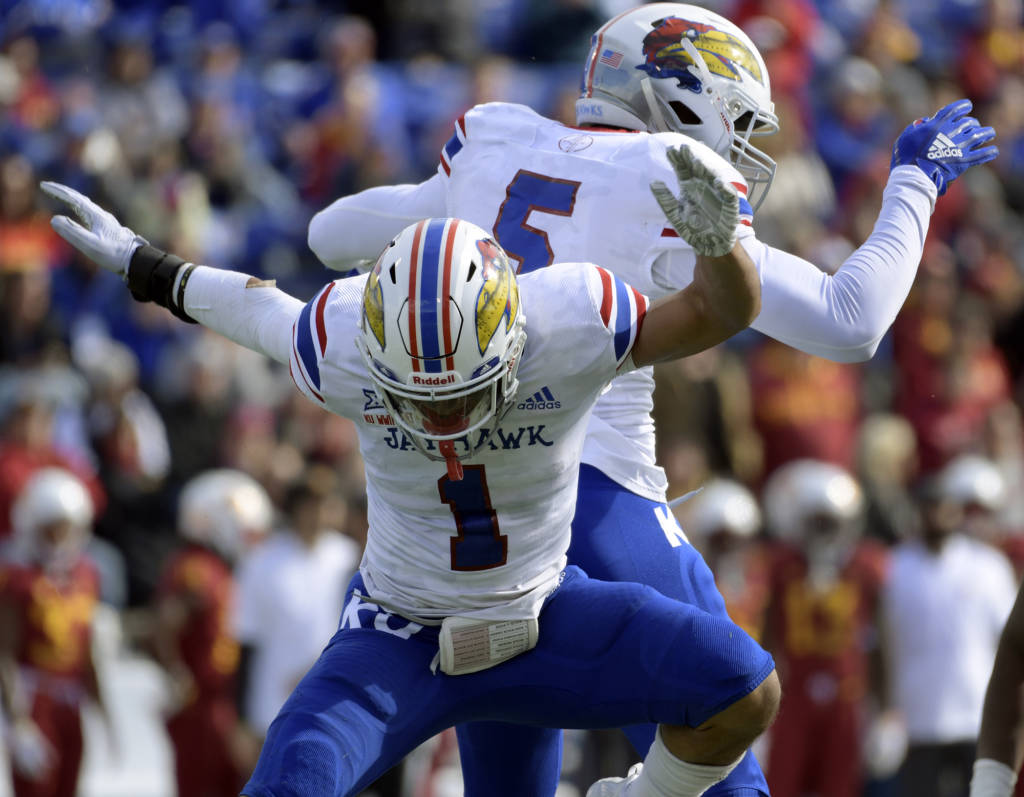 2019 (Sr.): Indiana State: Started at nickelback in the season opener … Recorded five total tackles … Coastal Carolina: Filled up the defensive stat sheet for the Jayhawks with eight total tackles (six solo, two assisted), 0.5 sacks for a loss of four yards and one forced fumble on the night … at Boston College: Started his third-straight game in the Kansas backfield … Racked up nine total tackles against the Eagles (two solo, seven assisted) … West Virginia: Tallied six tackles (three solo and three assisted) in the team’s Big 12 season opener … at TCU: Just shy of reaching double-digit tackles with nine total (seven solo, two assisted) against the Horned Frogs … Also had one tackle for a loss of two TCU yards … Oklahoma: One of two Jayhawks to lead the defense with six total tackles on the day (five solo, one assisted) … Registered one TFL for a loss of one yard … at Texas: Second on the team in tackles with eight total in Austin (five solo, three assisted) … Recovered a fumble, his first of the season, and third of his KU career … Texas Tech: Made two solos tackles in the Jayhawks’ 37-34 Homecoming victory over the Red Raiders … Kansas State: Shared the team lead in tackles with Davon Ferguson, as each player recorded eight total on the day … Torneden made six solo tackles and assisted on two more … Matched his season high in TFLs with 1.0 against the Wildcats … Also recorded his first pass breakup of the season … at Oklahoma State: In the Jayhawks’ starting lineup on defense for the 10th-consecutive game this season … Tallied two tackles (one solo, one assisted) and recorded 0.5 TFL on the afternoon in Stillwater against the nationally ranked Cowboys … at Iowa State: Earned his 11th start of the season in Ames … Made four solo tackles on the afternoon … Second on the team in total tackles with 67, just behind fellow senior teammate Mike Lee’s 69 tackles on the season … Baylor: Concluded his Kansas career with four solo tackles against the nationally ranked Bears on Senior Day.