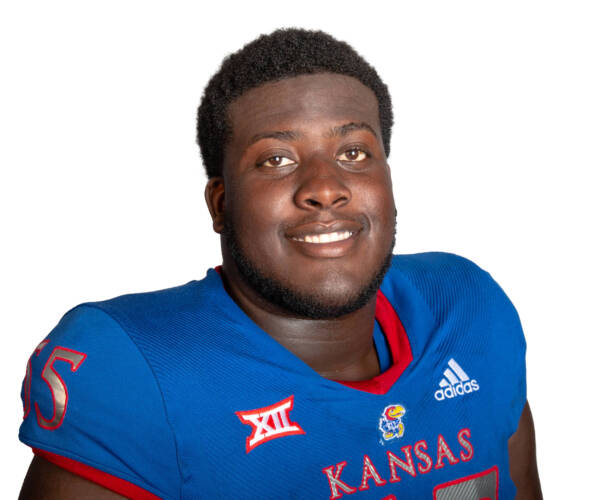 2021 (So.): Saw action in three games for the Jayhawks on the offensive line and special teams … Did not record any stats.

2020 (Fr.): Played in the team’s last five games of the season, starting three of those contests (vs. ISU, vs. TCU and at Texas Tech) … at Kansas State: Saw his first playing time as a Jayhawk at K-State in the Dillons Sunflower Showdown … Iowa State: Made his first-career start against Iowa State, at right guard … at Oklahoma: Played in his third-straight game on the offensive line … TCU: One of six true freshmen who started on offense for the Jayhawks against the Horned Frogs … He manned the RG position … at Texas Tech: Rounded out the season with another start at RG, his third of the season, and played in five of the Jayhawks’ nine games overall.

High School: Three star recruit out of DeSoto HS, as labeled by Rivals.com, 247 Sports and ESPN … Coached by Claude Mathis at DeSoto, where he helped the Eagles to a 9-3 record in 2019 … Ranked the No. 25 recruit in the state of Texas according to MaxPreps … The Dallas Morning News listed him among the top-100 players in the Lone Star State, coming in at No. 72 … Played at Mesquite Horn prior to his senior season at DeSoto … Competed in shot put and discus for Mesquite Horn’s track & field team as a sophomore in 2018.