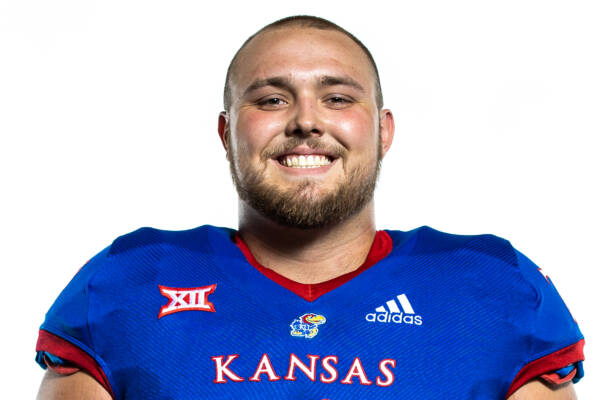 2021 (R. Fr): Started at right tackle in all 12 contests for the Jayhawks…Has started 14 straight games on the offensive line, dating back to 2020… Was part of an offensive line that allowed just 16 sacks in 12 games, after allowing 43 sacks in nine games in 2020…Helped freshman running back Devin Neal rush for 707 yards and eight touchdowns on 158 carries…Blocked for quarterback Jalon Daniels, who completed 55 of 92 passes for six touchdowns in the final three games of the season.

2020 (Fr.): Played in four of the Jayhawks’ last five games of the season … Earned starts in the final two games, vs. TCU and at Texas Tech. at Kansas State: Saw his first playing time as a Jayhawk in the Dillons Sunflower Showdown … at Oklahoma: Made his second appearance in the Crimson and the Blue in Norman; did not record any stats on the afternoon … TCU: One of six true freshmen to start on offense for KU against the Horned Frogs … His first-career start came at the RT position … at Texas Tech: Earned his second-consecutive start of the season at RT in Lubbock, which was his fourth appearance for the Jayhawks this fall … Did not register any statistics on the day.

High School: Coached by head coach Cal Fullerton at Clovis HS … Helped lead the Wildcats to the district championship in 2019 … Earned All-State First Team honors on offense as a senior … Also named All-State Second Team on defense … Picked up All-District First Team honors in 2019 … Named the Golden Helmet Award winner as a senior … Picked up Most Improved Player honors for Clovis HS in 2018 … Also lettered in basketball and baseball … Helped lead the Wildcats to the 2019 district tournament basketball title as a junior, on his way to honorable mention all-district honors … Earned all-district honors in baseball as a junior.

Personal: Son of Brendi and Tyler Cabeldue … Has one sister, Kaci, and two brothers, Cole and Roddy … Plans to major in business.