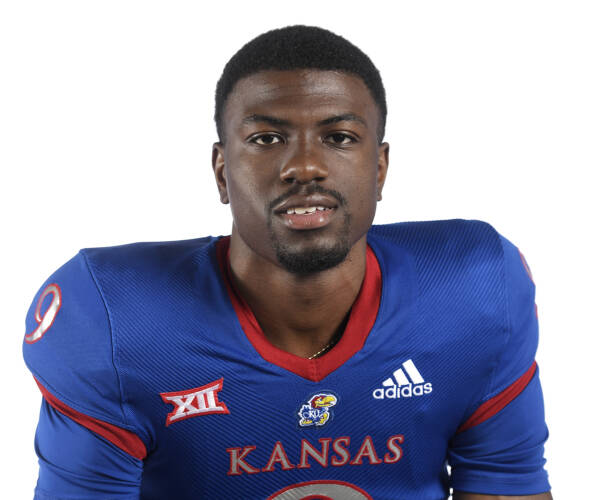 2020 (Fr.): All-Big 12 Honorable Mention (CB) … The true freshman started all nine of KU’s games on the season … Broke up 10 passes throughout the season, which tied for the most among true freshmen nationally … In addition, Prunty held opponents to just a 38.5% completion percentage against him, which ranks seventh in all of college football, while not allowing a single touchdown all season … Ninth amongst KU’s defenders with 26 total tackles on the season (22 solo and four assisted) … Recorded 1.0 TFL (for a loss of a yard) … Forced a fumble and intercepted a pass, both career firsts, in the final game of the season against TTU. Coastal Carolina: In his KU debut, made his first-career start at cornerback … Made his presence felt by registering four tackles, all of the solo variety … Also registered a pass breakup against the Chanticleers … at Baylor: Assisted on two tackles against the Bears and broke up a pass in his second-consecutive start … Oklahoma State: Totaled two tackles (one solo, one assisted) in his second-straight start vs. OSU … Also broke up a pass from his cornerback position … at West Virginia: Logged a new career high in pass breakups with two of KU’s 10 total PBUs on the afternoon in Morgantown … Also made two solo tackles … at Kansas State: Added another PBU to his season total (now at six) … Added two solo tackles to his stat line on the afternoon … Iowa State: Recorded six tackles, a new career high, in his sixth-straight starting assignment for the Jayhawks … at Oklahoma: Recorded his first-career tackle-for-loss (TFL) against the Sooners in the third quarter … In addition, he broke up three passes thrown by the OU quarterbacks and made two solo tackles on the afternoon … TCU: Responsible for two solo tackles against the Horned Frogs in his eighth-straight start of the season for the Jayhawks … at Texas Tech: Recorded his first-career interception, backed up in the red zone, intercepting Texas Tech’s Alan Bowman in the first quarter … Also registered one pass breakup in Lubbock, bringing his season total to 10 … Prior to the game at TTU, his nine pass breakups were the most in the country by a freshman … Forced the first fumble of his career in the third quarter, which Nate Betts scooped up and returned for a gain of 45 yards …  In addition, the freshman made four solo tackles against the Red Raiders.

High School: Rated a three star recruit according to Rivals.com, ESPN and 247 Sports … Ranked as the No. 30 recruit in the state of Virginia, according to ESPN and the No. 98 cornerback recruit by 247 Sports … Played under head coach Robert Jackson at I.C. Norcom HS in Portsmouth, Virginia.