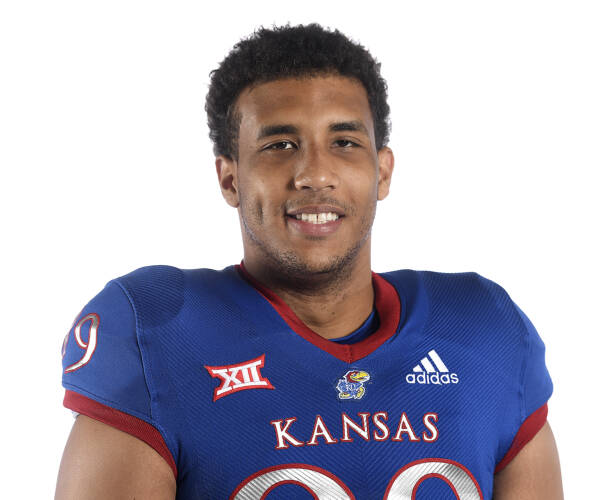 2020 (Jr.): Played in all nine of the Jayhawks’ games, earning starting nods in four of those contests … Tallied six total tackles for the season, one solo and five assisted … Added 0.5 TFL (of one yard) … Intercepted a pass against WVU in the fourth game of the season that was returned for 11 yards. Coastal Carolina: Started at defensive tackle in the Jayhawks’ season opener … Assisted on a tackle against the Chanticleers … at Baylor: Again in the starting lineup at defensive tackle in Waco … Oklahoma State: Retained his starting position at defensive end against the Cowboys … Did not record any stats … at West Virginia: Intercepted his first-career pass against the Mountaineers … Also assisted on three tackles and registered 0.5 tackles-for-loss (TFL) … at Kansas State: Registered a solo tackle in the annual Dillons Sunflower Showdown … Iowa State: Has seen playing time in each of the team’s first six games of the season now … Did not record any stats against the Cyclones … at Oklahoma: Assisted on a tackle against the Sooners, bringing his season total to six … TCU: Saw playing time in his eighth game this season, of which he has been a starter in four … Did not record any stats on the afternoon against the Horned Frogs … at Texas Tech: Played in his ninth game of the season for the Jayhawks in Lubbock.

2019 (So.): Saw playing time in 10 of KU’s 12 games, four of which he was in the starting lineup for … Registered 18 total tackles on the season (14 solo, four assisted) … Had 1.0 tackles-for-loss (of four yards) … Made 1.0 sack for a loss of three yards … Also credited for hurrying the opponents’ quarterback once. Coastal Carolina: Made his Jayhawk debut … Recorded five total tackles (four solo, one assisted) … Had 0.5 tackles-for-loss as well … at Boston College: Earned his first start of the season at defensive end for the Jayhawks … Registered three tackles (one solo, two assisted) … Credited with 0.5 sacks for an Eagles’ loss of three yards … West Virginia: Started his second-straight game for the Jayhawks … Made two tackles on the day, one solo and one assisted … at TCU: Made one solo tackle against the Horned Frogs … Oklahoma: In Kansas’ starting lineup for the fourth-consecutive game at defensive tackle … Did not record any stats on the afternoon against the Sooners … Texas Tech: Made one solo tackle in the Jayhawks’ Homecoming victory over the Red Raiders … Kansas State: Contributed two tackles on the day, both of the solo variety … at Oklahoma State: Again tallied two solo tackles against the nationally ranked Cowboys while in Stillwater … at Iowa State: Made a pair of solo tackles against the Cyclones in Ames, his third-straight game doing so for the Jayhawks … Baylor: Appeared in his 10th game of the year for the Jayhawks, but did not record any stats on the afternoon.

Personal: Son of Candace and Oudios Lee … Plans to major in pre-law … Chose Kansas over offers from FAU, Houston, Iowa, Iowa State, Louisville and others.