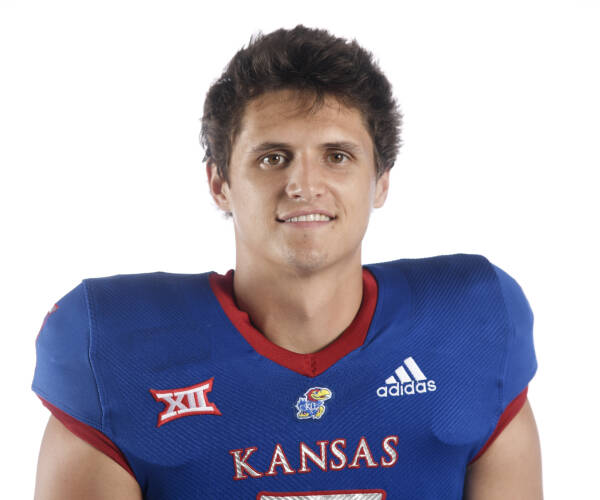 2020 (Sr.): Academic All-Big 12 Football First Team … Started the season opener against CCU and played against TCU … Between those two games, completed 6-of-10 passes for a total of 24 yards, with a long pass and reception for 13 yards … On the ground, carried the ball eight times for a net gain of 39 yards, good for an average of 4.9 yards per carry with a long rush of 19 yards. Coastal Carolina: Served as a team captain in the Jayhawks’ season opener … Made his first-career start against the Chanticleers, but left the game in the second half due to injury … TCU: Saw his second playing time of the season against the Horned Frogs … Completed 1-of-1 passes for four yards and carried the ball twice for a total of two yards.

2019 (Jr.): Saw playing time for the Jayhawks in two games (Kansas State and at Oklahoma State).

Mesa CC (2018): Tabbed the No. 2 pro-style quarterback by JCGridiron.com … Touted a three-star rating by Rivals.com, ESPN and 247Sports.com in their JUCO rankings … Threw for 1064 yards and 16 touchdowns in six games with Mesa CC in 2018.

High School: Rated the nation’s No. 8 pro-style quarterback by 247Sports … Threw for 1,896 yards and 22 touchdowns in seven games due to injury … Earned All-Greater Catholic League (GCL) South Division … Threw for a season-high 475 yards and six touchdowns in a 55-52 victory over Cleveland St. Ignatius … Rated number 91 in the Top247 … Rated the No. 5 overall prospect in Ohio by 247Sports and No. 24 by ESPN … Played under Coach John Rodenberg at Archbishop Moeller HS.

Personal: Son of Thomas Sr., and Mary MacVittie … Has two sisters … Father, Thomas, played football at Penn … Plans to major in marketing … Chose Kansas over Vanderbilt and others.