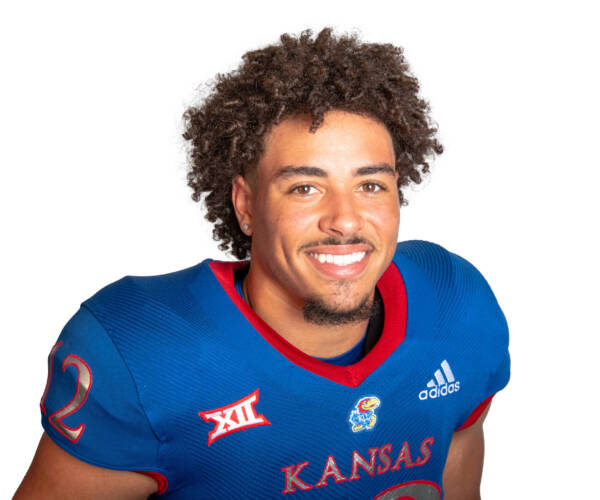 2021 (RS-So.): Played in nine out of 12 games for the Jayhawks … With 141 all-purpose yards, he had three receptions for 24 yards and one touchdown … Also had 36 carries for 117 yards and two touchdowns… Had season high games at Duke followed by Iowa State … Recorded his first career TDs against the Blue Devils with a reception for 20 yards and seven carries for 47 yards … Posted 12 rushes for 39 yards and one TD against the Cyclones.

2020 (RFr.): Played in three of the Jayhawks’ nine games of the season … Did not record any statistics for the year. Saw playing time in each of the first two games of the season (Coastal Carolina and at Baylor) but did not record any stats … at West Virginia: Played for the Jayhawks in Morgantown without recording any statistics.

2019 (Fr.): Saw playing time in four of KU’s games in the second half of the season as a true freshman … Carried the ball three times for the Jayhawks, gaining four yards on the ground. at Texas: Made his Jayhawk debut … Carried the ball twice for KU, gaining a yard on each attempt … Texas Tech: Saw playing time in the Jayhawks’ Homecoming victory over the Red Raiders, but did not record any stats … Kansas State: Did not record any statistics while on the field for Kansas during the annual Dillons Sunflower Showdown … at Iowa State: Made his fourth appearance as a Jayhawk in Ames … Carried the ball once on the day, which was good enough to tie his season and career high of two yards.

High School: Garnered a three-star rating by 247Sports and ESPN … Lead Rockdale HS to a 13-3 record winning the Texas 3A state championship in 2017 … Named TWSA 3A Offensive Player of the Year … Passed for 2,536 yards with 27 touchdowns and rushed for 2,434 yards with 32 touchdowns … Played under head coach Jeff Miller at Rockdale HS.

Personal: Son of Kelly and Kerry Locklin … Plans to major in business … Father, Kerry, played tight end at New Mexico State and then went on to play for the Los Angeles Rams and Denver Broncos of the NFL … Kerry Locklin is currently a defensive line coach for the Toronoto Argonauts of the CFL, and has also coached at Utah, Morehead State, Eastern Michigan, Fresno State, New York Jets and his alma mater New Mexico State … Chose Kansas over offers from New Mexico State and Iowa State.