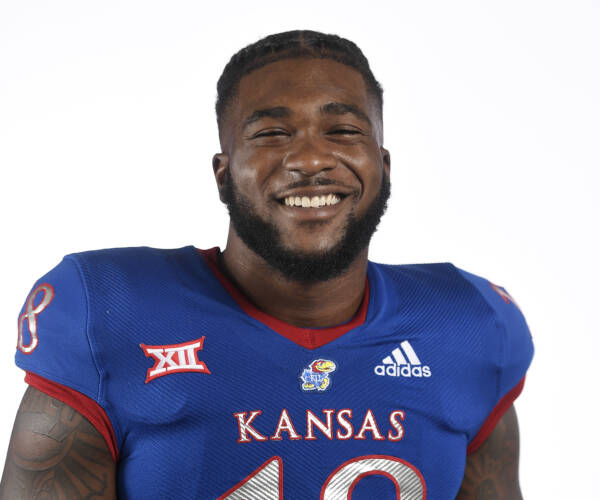 2020 (Sr.): Played in each of the Jayhawks’ first five games of the season, earning starts on defense each game … Racked up 20 tackles in five games, 16 solos and four assisted … Also registered 1.5 TFL and forced a fumble. Coastal Carolina: Served as a team captain for the Jayhawks’ season opener … Set a new career high in tackles with seven, surpassing his previous high of three set twice in 2016 … at Baylor: In the starting lineup at linebacker in the Jayhawks’ first Big 12 Conference game of the season … Assisted on a tackle against the Bears, which was also good for 0.5 TFL … Oklahoma State: Tied his career high in tackles with seven (four solo, three assisted) against OSU, including 1.0 TFL for a loss of a yard … Started at linebacker for the third game this season … at West Virginia: In the starting lineup for the 4th-straight game, this time at the HAWK position … Forced a WVU fumble in the first quarter, which was recovered by Duece Mayberry and ultimately led to a 41-yard field goal by Jacob Borcila to put the Jayhawks on the scoreboard first, 3-0, in Morgantown … at Kansas State: In the starting lineup at linebacker for the fifth-straight game in Manhattan, where he made four solo tackles.

2018 (RJr.): Appeared in 12 games at linebacker … Credited for eight tackles, including six solo … Recorded one tackle for a loss and one fumble recovery … at Central Michigan: Recorded two tackles and a fumble recovery on a muffed punt … KU scored a field goal following his fumble recovery.

2016 (So.): Did not see any action until the fourth game of the year, then became a regular at linebacker and on special teams … Posted eight tackles, a forced and a recovered fumble … Totaled a career-high three tackles at West Virginia and against Iowa State … Forced a fumble at West Virginia … at Texas Tech: Saw his first action of the season, but did not record any statistics … TCU: Saw action, but did not record any statistics … at Baylor: Posted the first tackle of his career against the Bears … Oklahoma State: Recorded time on special teams coverages, but did not record any statistics … at Oklahoma: Did not see any game action … at West Virginia: Gathered a career-high three tackles and forced the first fumble of his career … Iowa State: Tallied a career-high-tying three stops against the Cyclones … Texas: Recovered a second quarter fumble in the victory over the Longhorns … at K-State: Posted one tackle against the Wildcats.

2015 (Fr.): Saw time in six games on special teams assignments against Rutgers, Iowa State, Baylor, Texas Tech, West Virginia and K-State, but did not record any statistics … Did not play against SDSU, Memphis, Oklahoma State, Oklahoma, Texas or at TCU.

High School: Rated a two-star prospect by both Rivals and 247Sports.com after his prep career at Manor HS … Played for head coach Sadd Jackson at Manor and in 2014 recorded 30 tackles, 3.0 tackles-for-loss, five pass breakups, one interception, a forced fumble and a fumble recovery … Named to District 17-5A’s first team on the defensive side of the ball following his efforts in 2014 … Honored as a second-team selection on District 17-4A’s offensive team following the 2013 season from the quarterback position … Also lettered in basketball at MHS … Chose Kansas over an offer from Miami (Ohio).

Personal: Son of Ella and Hayward Feaster … Has one younger brother, Isaiah … Earned his degree in liberal arts and sciences in May 2019.