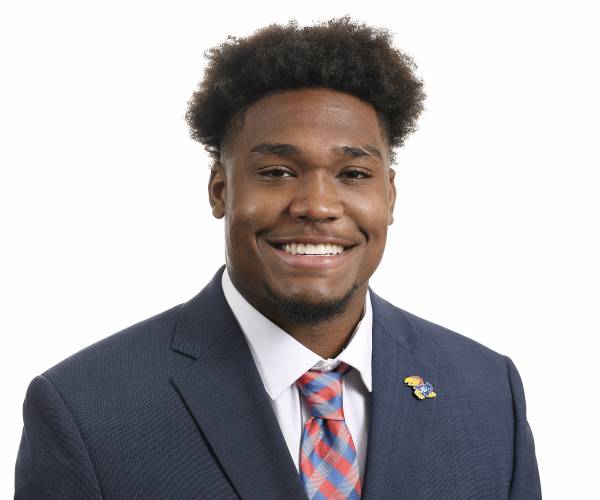 2019 (Sr.): Started at running back for the Jayhawks in the first two games of the season and saw playing time in the next two for the season … The Jayhawks’ second-leading rusher with 384 net yards accumulated on 43 carries in four games played … He scored two rushing touchdowns and averaged 8.9 yards per carry … His long rush of the year was good for 82 yards. Indiana State: Started at running back in the season opener … Ran for 88 yards on only 17 carries, averaging 5.2 yards per carry … Coastal Carolina: Carried the ball eight times for a total of 82 yards … Longest run of the game was a 41-yard rush that resulted in the Jayhawks’ first touchdown of the game in the first quarter of action … at Boston College: Rushed the ball 11 times for a net total of 187 yards, the third 100+ rushing yard game of his collegiate career … Scored one touchdown against the Eagles to aid in the Jayhawks’ victory on the road … His 82-yard rush in the second quarter was the longest of his KU career by 15 yards … It was also the second-longest non-scoring play in Kansas football history … West Virginia: Named a captain for the Jayhawks’ Big 12 season opener after his dominating performance at Boston College the week prior … Carried the ball seven times for a total of 27 yards against the Mountaineers.

2017 (So.): Played in 11 games, starting six at running back … Rushed for a career-best 291 yards against West Virginia, which ranks third on KU’s single-game rushing list … Carried the ball a career-high 36 times against the Mountaineers … Turned in a personal-best 67 yard carry against WVU … His two-game (Ohio, West Virginia) total of 428 rushing yards ranks third all-time in KU history for back-to-back rushing totals … Finished the season with one 200-yard rushing game and eclipsed 100 yards rushing in two games …  Collected season totals of 663 yards on the ground on 120 carries, both of which led the team … Averaged 5.5 yards per carry … Scored four touchdowns … at Ohio: Carried the ball 19 times for 137 yards and two scores … His 137 yards marked his first-career 100-yard rushing game … Also caught two passes for 18 yards … Scored on a 56-yard run and a two-yard carry … West Virginia: Captured his first 200-yard rushing game by tallying 291 yards on the ground on a career-high 36 carries … His 291 yards rank third on KU’s single-game rushing chart … Scored two touchdowns against WVU, including a career-long 67-yard rush … Also had one catch for five yards … Averaged 8.1 yards per carry vs. the Mountaineers … Texas Tech: Registered 10 carries for 65 yards before leaving the game with an injury … Rattled off a 45-yard run prior to his injury … Also caught one pass for six yards … K-State: Rushed the ball 12 times for 33 yards … Baylor: Had 10 carries for 71 yards … Averaged 7.1 yards per carry vs. the Bears … Turned in a game-long rush of 43 yards … Added one reception for 10 yards … Oklahoma: Carried the ball 13 times for 38 yards … Hauled in two catches for nine yards.

2016 (Fr.): Played in eight games … Started three contests: against Rhode Island, TCU and Texas … Posted 189 yards rushing on 44 attempts … Averaged 4.3 yards per rush … Scored three touchdowns on the year … Long rush of 66 yards at Memphis … Also tallied a season-high 74 yards rushing on six carries … Rhode Island: Started at running back in his Jayhawk debut, and picked up 15 yards on four carries in KU’s win … at Memphis: Accounted for 35 percent of the Jayhawks’ offensive output after totaling 109 yards of offense (74 rushing, 35 receiving) … Also scored the Jayhawks’ lone touchdown of the day on a 66-yard run, the longest by a Jayhawk since 2014 … at Texas Tech: Earned a start and ran seven times for 22 yards … at Baylor: Tallied his second touchdown of the season after a nine-carry, 34-yard performance against the Bears … Texas: Carried the ball 10 times for a net of 26 yards and scored KU’s lone rushing touchdown in the victory over the Longhorns … at K-State: Rushed five times for 13 yards against the Wildcats.

High School: Garnered a three-star rating by ESPN and 247Sports.com … Recorded 861 yards on 118 carries, including nine touchdowns, as a senior … Helped lead the Patriots to a 9-2 mark and a district title as a senior … Earned First Team All-Broward County honors and was named Second Team All-Dade in 2015 … Named to the Miami Herald’s Top-50 Players of Broward County list … Tabbed for the Broward vs. Dade All-Star Game … Played under head coach Mike Rumph at American Heritage HS … Chose Kansas over offers from Mississippi State, Florida Atlantic and Florida International.