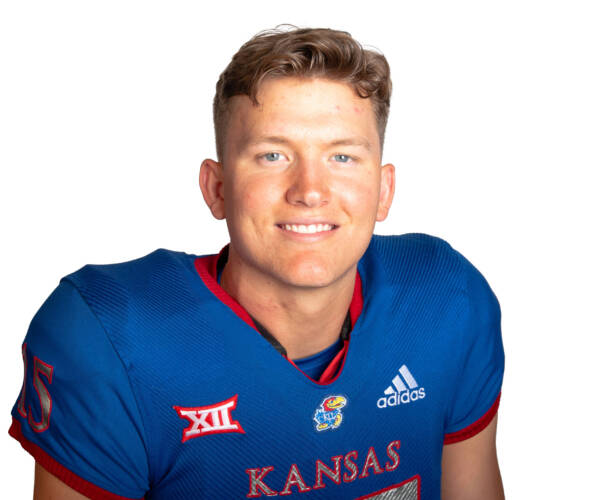 2018 (RFr.): Saw his first career action against Rutgers, but did not record any statistics.

High School: Earned three football letters as a quarterback under head coach Rich Gutierrez at Canyon HS … Voted a team captain as a junior and senior … Owns mutliple CHS passing records as he finished his career with 6,887 passing yards and 61 touchdowns … Started 31- consecutive games for CHS during his three varsity seasons … Tabbed All-State Second Team in 2014 and earned all-league honors in 2014 and 2015 … Also a standout in the classroom as he earned Canyon HS Scholar-Athlete Award four-straight years (2013-16) … Named to the High School Scholar-Athlete Hall of Fame in the spring of 2017 … A West Point Leadership Award recipient and a Safe School Ambassador.

Personal: Son of Letriana Taibi and Erik Fallin … Has one brother, Jackson … BSB degree in Management and Leadership completed in three years … Currently pursuing his MBA … Active in community service during his time as a Jayhawk and prior to arriving in Lawrence … Participated in Special Needs Athletes and Peers (SNAP) flag football and was also a Special Olympics basketball coach during his time at Canyon HS.