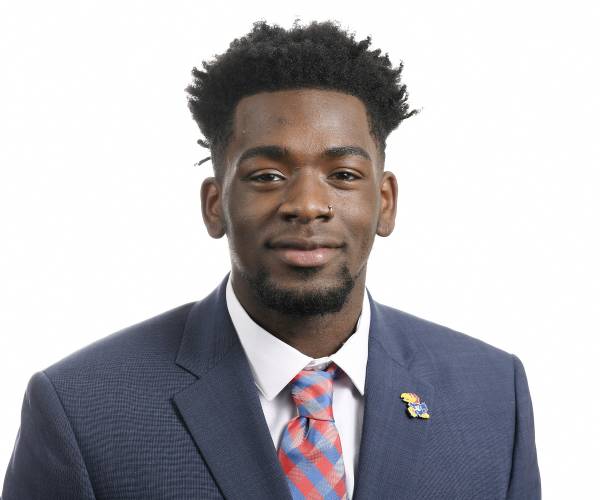 2019 (Sr.): Saw playing time for the Jayhawks in each of their 12 games, earning starting nods in four of those contests … Totaled three tackles (two solo, one assisted) on the season … KU’s fourth-leading receiver, accumulating 413 yards on 33 catches and scoring two touchdowns, good for an average of 12.5 yards per catch … His long reception of the season was for 32 yards. Indiana State: Hauled in six receptions for 79 yards, including the game-winning touchdown in the season opener … Coastal Carolina: Saw playing time vs. the Chanticleers … at Boston College: Caught one pass from quarterback Carter Stanley, good for 10 yards … Also made three tackles against the Eagles, a new career best for him while at Kansas … West Virginia: Recorded 52 yards of receiving on the day, with four catches hauled in … at TCU: Made a pair of receptions against the Horned Frogs … Oklahoma: Caught a pair of passes from quarterback Carter Stanley, good for a total of 33 yards on the day … Hauled in a 22-yard touchdown reception to get Kansas on the scoreboard, which was also his long catch of the day … at Texas: Made his second start of the season for the Jayhawks in Austin … Compiled 47 yards receiving on three passes, with a long of 23 yards … Recipient of the 2-point conversion pass from quarterback Carter Stanley in the fourth quarter that kept the game close … Texas Tech: Caught two passes from Carter Stanley for a total of 16 yards, with a long gain of 11 yards, in the Jayhawks’ Homecoming victory over the Red Raiders … Kansas State: Made his third start of the season for the Jayhawks at wide receiver … Compiled 49 yards receiving on four catches in the annual Dillons Sunflower Showdown … His long catch of the day, 32 yards, was a new season high … at Oklahoma State: Accumulated 46 yards receiving on three receptions, with a long of 20 yards, against the nationally ranked Cowboys in Stillwater … at Iowa State: Made a pair of catches in Ames, totaling 52 yards, with a long reception of 31 yards on the day … Baylor: KU’s second-leading receiver on the day against the Bears, hauling in four receptions for a total of 30 yards.

2018 (Jr.): Appeared in 12 games as a junior … Recorded 12 receptions for a total of 178 yards … Averaged 14.8 yards per catch and 17.8 yards per game … Caught two touchdown receptions … at West Virginia: Caught his first-career touchdown as a Jayhawk, an 18-yard pass … Texas Tech: Recorded a career-high four receptions for 67 yards, including a career-long 44-yard reception …  at Kansas State: Caught three passes for 32 yards … Texas: Scored second touchdown in a Kansas uniform … Registered three receptions for 53 yards.

2017 (RSo.): Saw action in 11 games, primarily on special teams … Caught one pass … Central Michigan: Hauled in his first catch as a Jayhawk.

Fr. (2015 at Alabama): Played in five games and caught two passes for the Crimson Tide for nine yards … ULM: Reeled in his first-career catch, an 8-yard catch and run against the Warhawks … Charleston Southern: Notched one catch for one yard against the Buccaneers.

High School: Top-rated wide receiver nationally who was a consensus four-star recruit … Selected to participate in the Under Armour All-America Game … Ranked No. 59 in the ESPN300, the No. 8 wide receiver, No. 2 player in the state of Louisiana and No. 32 prospect in the Southeast region … Rated as the No. 9 receiver by Rivals. com and No. 78 in the Rivals100, while being tabbed as the No. 4 player in Louisiana … Tabbed No. 122 in the Top247 and the No. 13 wide receiver and No. 6 player in the state … Rated as the 247Composite No. 9 wide receiver and No. 90 player overall … Ranked No. 183 in the Scout300 and the site’s No. 23 wide receiver … Tabbed No. 89 on the 2014 Prepstar Top 150 Dream Team … Earned 2014 3A All-State honors from the Louisiana Sports Writers Association after catching 30 passes for 711 yards and 14 touchdowns … Named a 2013 LSWA All-State choice after catching 48 passes for 1,055 yards and 16 touchdowns … Played for head coach Chad Blanchard at Patterson HS … Chose Alabama out of high school over LSU, while also considering Miami, Arizona State and Texas A&M.