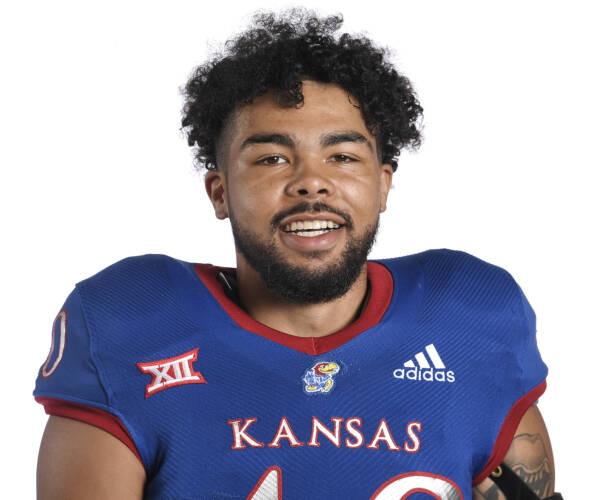 2020 (Jr.): Started three times in KU’s first four games of the season … Racked up 23 tackles (18 solo, five assisted) in the three games in which he played this season, which tied him for 12th amongst all Jayhawks … Third in TFLs for the year, as he had 3.5 for a loss of 17 yards … Also sacked an opponent, good for a loss of eight yards … In addition, credited for hurrying the opponents’ QBs twice and breaking up a pass. Coastal Carolina: Reached double-digit tackles against the Chanticleers, for the second time in his career, compiling 11 tackles, which tied his career-best total set against Coastal Carolina in 2019 … Also had one pass breakup and a tackle-for-loss (TFL) of two yards in the Jayhawks’ season opener … at Baylor: A team captain in the Jayhawks’ Big 12 Conference season opener … Recorded three tackles (two solo, one assisted) after starting his second-straight game … at West Virginia: Filled up his stat sheet against the Mountaineers, as he registered a new career high in TFLs with three … Collected eight tackles (seven solo, one assisted) for the second-best total on the Jayhawks’ roster for the game … Made 1.0 sack (for a loss of eight yards) and hurried the WVU quarterback twice.

2019 (Jr.): Started each of the team’s first four games at linebacker before being sidelined for the remainder of the season due to injury … Ninth among Jayhawk defenders for the season with 39 tackles (30 solo, nine assisted) made in just four games played … Included were 2.5 tackles-for-loss (of 22 yards) and 2.0 sacks … Also credited with a pass breakup and a forced fumble in his limited playing time. Indiana State: Started at linebacker in the season opener … Led the Jayhawks in tackles with nine, including one sack and one tackle-for-loss … Coastal Carolina: Started at linebacker vs. the Chanticleers … Led the Jayhawks’ defensive effort with a career-high 11 tackles (10 solo, one assisted) and one tackle-for-loss … His 20 total tackles on the season lead the KU team and has him tied for fourth in the Big 12 Conference with 10.0 tackles per game … at Boston College: Recorded double-digit tackles (10) for the third-straight game, leading the Jayhawk defense again … Also forced one Eagles’ fumble … West Virginia: Named a captain for Kansas’ Big 12 season opener after his performance at Boston College the week prior … One of three Jayhawks to record nine tackles against the Mountaineers to lead KU’s defensive effort … Matched his career highs with 1.0 sack and 1.0 TFL that resulted in a loss of 10 yards for the visitors.

2018 (So.): Played in all 12 games on special teams and at linebacker … Rutgers: Recorded a season-high three stops … TCU: Credited with one tackle.

High School: Lettered two years at Kaufman HS … Earned all-state honors playing linebacker in 2015 … Picked up district MVP honors as a senior … Ranked in the top-five running backs in Texas Class 4A … Helped lead KHS to the third round of the playoffs in 2015 … Named district Defensive MVP as a junior in 2014 … Earned four letters in track & field … Participated in the Texas State Track Meet in the 400 meters in 2013.