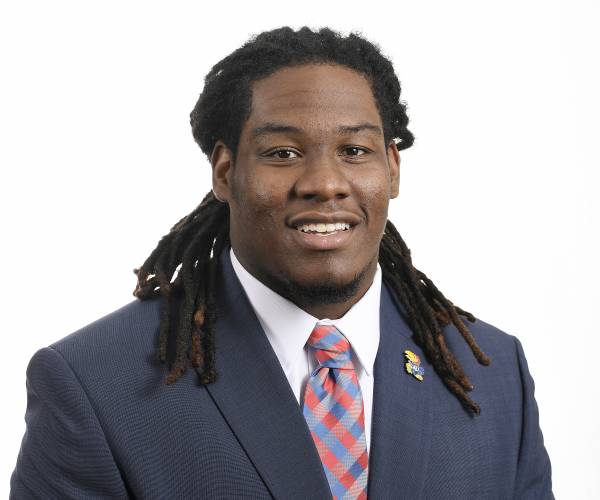 2019 (Sr.): Played in all 12 games for KU in his senior season, earning a starting nod against Coastal Carolina … Registered 23 tackles (18 solo, five assisted), including 2.5 tackles-for-loss of 10 yards … Also made 1.5 sacks, good for a loss of eight yards … On pass defense, had one breakup and one quarterback hurry … Additionally, forced a fumble in his playing time. Indiana State: Saw action in the season opener … Made one tackle … Coastal Carolina: Started at defensive end vs. the Chanticleers … Recorded one solo tackle on the day … at Boston College: Set a new Kansas career high with two solo tackles against the Eagles … West Virginia: Tied his KU career high in tackles with two as well as his best tackles-for-loss game, racking up 1.0 for a loss of two yards … at TCU: Set a new KU career best in tackles in Fort Worth, registering three on the day … Oklahoma: Recorded his first pass breakup of the season, and his KU career, against the Sooners … Matched his career-high three tackles from the week prior (two solo, one assisted) … at Texas: Made two tackles against the Longhorns (one solo, one assisted) … Texas Tech: Played in the Jayhawks’ Homecoming victory over the Red Raiders, 27-34, but did not record any stats … Kansas State: Had a big defensive day against the Wildcats, tying his season/career high in tackles with three, sacks with 1.0, also 1.0 TFLs as well as first forced fumble as a Jayhawk … at Oklahoma State: Hurried the Cowboys’ quarterback for the first time this season, as well as in his two-year Jayhawk career … at Iowa State: Made a pair of solo tackles against the Cyclones in Ames … Baylor: Recorded a single solo tackle against the Bears in the season finale.

2018 (Jr.): Appeared in 12 games … Recorded eight tackles, including four solo and four assisted … Registered two tackles for a loss, including one sack … Central Michigan: Recorded first tackle in the Crimson and Blue … Oklahoma State: Credited for a career-high two tackles.

2017 (So. at Butler CC): Rated a three-star prospect according to Rivals.com … Collected 19 total tackles, including 3.0 tackles-for-loss, and a pass breakup during the 2017 campaign … Earned Honorable Mention All-KJCCC honors in 2017 … Played for head coach Tim Schaffner at BCC.

2016 (Fr. at Tiffin University): Registered 22 tackles, including 5.0 TFLs, during his one season with the Dragons … Also recorded 2.5 sacks, two forced fumbles and a pass breakup … Played under head coach Gary Goff at Tiffin.

Personal: Son of Victoria and Charles Cole … Majoring in communication studies with a minor in sport management … Selected Kansas over offers from Fresno State, Memphis and UNLV, among others.