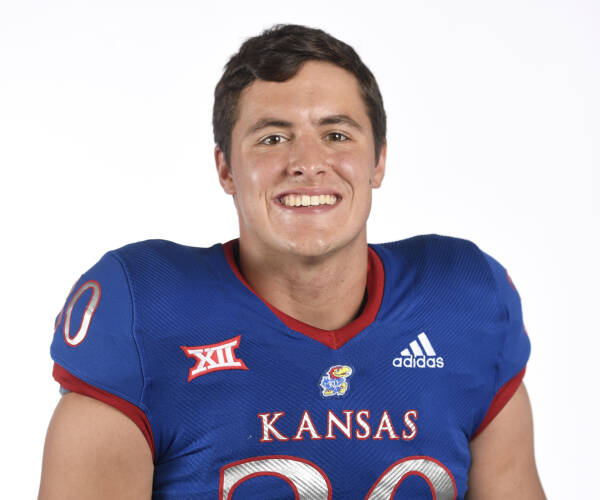 2020 (Jr.): Academic All-Big 12 Football First Team … Earned playing time in the Jayhawks’ penultimate game of the season, his first appearance of the season. TCU: Saw his first playing time this season against the Horned Frogs … Did not record any stats on the afternoon.

2019 (So.): Academic All-Big 12 First Team … Big 12 Commissioner’s Honor Roll and Athletic Director’s Honor Roll (spring) … Played in five of KU’s 12-game season … Recorded two total tackles on the season, one solo and one assisted. West Virginia: Made his Kansas debut … Recorded two tackles (one solo, one assisted) against the Mountaineers … at TCU: Saw playing time in Fort Worth, but did not record any statistics … Oklahoma: Played for the third time this season, but did not record any stats on the afternoon against the Sooners … at Texas: Made his fourth-straight appearance for the Jayhawks this sesason … Did not record any stats on the night … at Oklahoma State: Returned to the field in Stillwater for the Jayhawks, his fifth time donning the Crimson and Blue for Kansas this season.

Personal: Son of Scott and Anne Root … Has two siblings, Landon and Addison … Addison is a member of the Providence University volleyball team … Cousin, Kyle Wilson was an all-conference basketball player at Wichita State in the mid-2000s … Grandfather, John H. “Junior” Born was a starting basketball guard at Tulsa from 1954-57 … Majoring in biology.