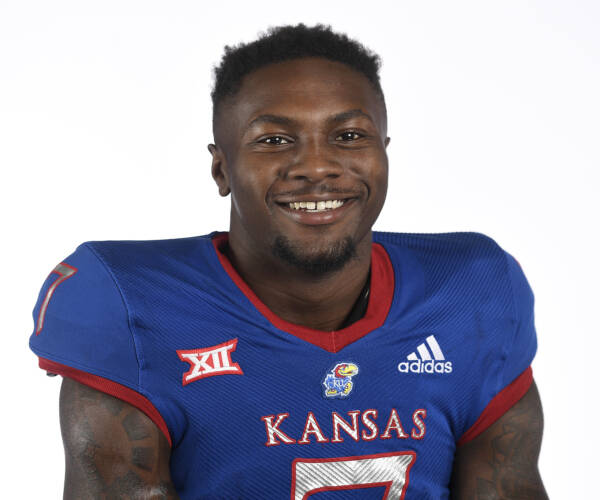 2020 (Jr.): A starter in each of the first four games of the season … In a three-way tie for sixth among the KU defense with 27 tackles for the season (21 solo, six assisted) … Also registered 2.0 TFL of three yards. Coastal Carolina: Started at safety and made two solo tackles against the Chanticleers in the Jayhawks’ season opener … at Baylor: Recorded five tackles (four solo, one assisted) and 0.5 TFL (for two yards) after starting at safety for the Jayhawks in Waco … Oklahoma State: Set a new career high with 11 tackles against OSU after starting at the safety position … Made eight solo stops, three assisted and had 1.5 TFL for a loss of a yard … at West Virginia: KU’s leader on the defensive side of the ball with a total of nine tackles on the day (seven solo, two assisted).

2019 (Jr.): An Academic All-Big 12 Second Team honoree … Played in all 12 of KU’s games, earning starts in each of the final five contests of the season … Third among the Jayhawk defenders, accumulating 57 total tackles (42 solo, 15 assisted) … Recorded 3.0 tackles-for-loss (of 28 yards) … Had one pass breakup on the year and also forced a fumble. Indiana State:  Saw playing time in the season opener … Recorded three tackles … Coastal Carolina: Matched his career high in tackles with three solos vs. the Chanticleers … at Boston College: Again recorded three tackles against the Eagles, matching his career best while at Kansas … West Virginia: Contributed two assisted tackles to the Jayhawks’ defensive effort against the Mountaineers …at TCU: Matched his then-KU career high in tackles against the Horned Frogs with three (one solo, two assisted) … Oklahoma: His tackle-for-loss resulted in the Sooners losing 23 yards … Made five tackles (three solo, two assisted) on the day, marking a new career high as a Jayhawk … at Texas: Contributed three solo tackles to the Jayhawks’ defensive effort against the nationally ranked Longhorns … Texas Tech: Earned his first start of the season for the Jayhawks, where he led the defense with seven solo tackles and forced his first fumble of the year, and in his KU career, in the Homecoming victory over the Red Raiders, 37-34 …Kansas State: Led the KU defense for the second-straight game in tackles; this time he surpassed his previous season/KU career best by contributing eight total tackles (seven solo and one assisted) … at Oklahoma State: Made his third-straight start of the season for the KU defense in Stillwater … Again among the Jayhawks’ best players on the afternoon against the nationally ranked Cowboys, in which he totaled eight tackles (seven solo, one assisted) for the second-straight game and also registered 1.0 TFL, which also matched his season/KU career best in the category … at Iowa State: Made his fourth-consecutive start for the Jayhawks at safety … Tallied eight tackles total against the Cyclones (five solo, three assisted), which tied his season and Kansas-career best, achieved two other times this season, most recently at Oklahoma State … Also broke up an ISU pass, his first such stat of the season … Baylor: Recorded four total tackles (three solo, one assisted) in his fifth start of the season for the Jayhawks … Made one tackle-for-loss (of four yards) against the Bears, tying his season and career highs.

2018 (So.): Appeared in four games at safety and on special teams, before taking a redshirt … Recorded six tackles, including five solo … Had one interception for 12 yards and a pass deflection … Rutgers: Recorded two tackles in the win … at West Virginia: Credited with three tackles and his first-career interception.

2017 (Fr. at Hartnell College): Rated a three-star recruit by 247Sports.com … Collected 55 total tackles, including 41 solo hits … Recorded two interceptions, one of which he returned for a touchdown … Also posted two fumble recoveries and two forced fumbles … Averaged 9.6 yards per punt return to lead the region … Posted seven kick returns for 182 yards, an average of 26.0 yards per return … Earned All-Golden Coast Conference First Team honors and was named Hartnell’s Defensive Back of the Year in 2017 … Played for head coach Matt Collins at Hartnell.