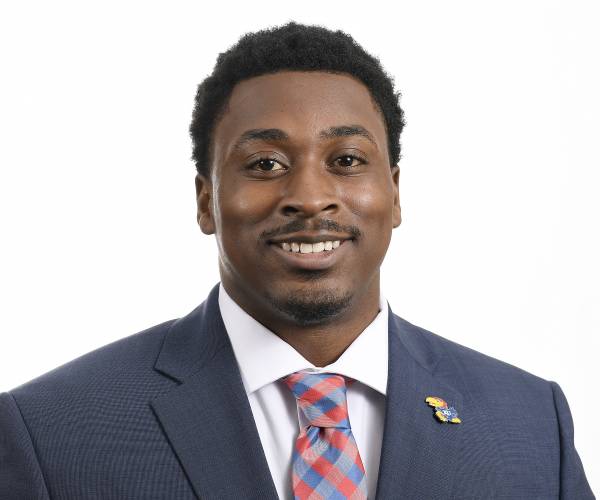 2019 (Sr.): Played in all 12 of Kansas’ games … Racked up 19 total tackles in his playing time, 17 solos and two assisted … Also registered 2.0 tackles-for-loss (of three yards). Saw playing time in each of the Jayhawks’ first four games (Indiana State, Coastal Carolina, at Boston College and West Virginia) but did not record any statistics … at TCU: Made four solo tackles against the Horned Frogs to register his first stats of 2019 … Oklahoma: Registered a pair of tackles (one solo, one assisted) against the Sooners … Also recorded a tackle-for-loss of one yard … at Texas: Contributed two tackles (one solo, one assisted) to the Jayhawks’ defensive effort in Austin … Texas Tech: Helped lead the KU defense to a Homecoming victory over the Red Raiders, 37-34 … Contributed season/career highs in both tackles (six solos) and matched his bests with 1.0 TFL …at Oklahoma State: Made one solo tackle against the nationally ranked Cowboys in Stillwater … Kansas State: Saw playing time against the Jayhawks’ in-state rival, but did not record any stats on the afternoon … at Iowa State: Tallied a single solo tackle against the Cyclones in Ames … Baylor: Recorded three solo tackles against the Bears in the Jayhawks’ season finale … Made his 12th appearance of the season in the Crimson and the Blue.

2018 (Jr.): Appeared in 11 games … Totaled nine tackles, including seven solo … Had one tackles-for-loss of three yards … Recorded one forced fumble …  at Central Michigan: Recorded one tackle … Rutgers: Totaled two tackles … at West Virginia: Credited with one tackle … at Texas Tech: Recorded one TFL … at Oklahoma: Recorded three tackles and a pass break up.

2017 (So.): Played in all 12 games on special teams, cornerback and nickleback … Picked up his first-career start against Oklahoma State at nickleback … Finished the season with 17 tackles …  SEMO: Recorded one solo tackle … at Ohio: Had one tackle … West Virginia: Tallied two tackles and one pass breakup … Texas Tech: Set a new career high with five tackles, including four solo stops … at TCU: Had one solo tackle …  Credited with his first-career tackle-for-loss … K-State: Recorded one tackle against the Wildcats … Baylor: Tallied one tackle … at Oklahoma State: Registered his first-career start and had tied his career best with five tackles.

2016 (RFr.): Saw the first action of his career at Memphis … Recorded time on special teams assignments throughout the season … Posted three tackles on the year … Oklahoma State: Notched the first tackle of his career on kickoff coverage against the Cowboys … at West Virginia: Collected a career-high two tackles.