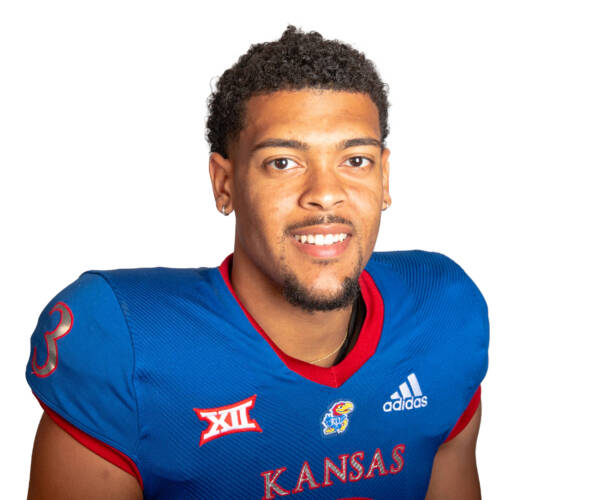 2020 (Jr.): Academic All-Big 12 Football First Team … Played in seven of the Jayhawks’ nine games of the season, earning starting nods at the QB position at both West Virginia and at Texas Tech …  Completed 60.8% of his passes by going 73-of-120 to his receivers, good for 647 yards on the year … His completions included six passes that resulted in TDs, tops among the KU QBs on the year. Coastal Carolina: Saw action in the season opener, throwing for 156 yards and two touchdowns … At the 2:29 point of the third quarter, Kendrick connected with Andrew Parchment on a 14-yard touchdown, which was the second of his KU career and his first since 2017 (Rutgers) … Netted his second passing TD of the day on a five-yard throw to Kwamie Lassiter II, setting a new single-game high for passing touchdowns, passing yards, completions and attempts … Oklahoma State: Completed 11-of-19 passes for 90 yards, with a long of 30 yards, against OSU off the bench … at West Virginia: Made his first-career start at quarterback for Kansas in Morgantown … Completed 14-of-23 passes for 95 yards and one touchdown, a 43-yard pass to Andrew Parchment to give the Jayhawks their second scoring drive of the day and ultimately put Kansas ahead 10-0 after Jacob Borcila made the PAT … Iowa State: Played in his fourth game of the season for KU, completing 2-of-3 passes in his time on the field … at Oklahoma: Completed 3-of-4 passes for 36 yards in his playing time in Norman … Included was a 20-yard pass to Will Huggins for a touchdown as time ran out in the game … TCU: Entered the game late in the first half and led KU on a four-play, 75-yard drive in which he went 4/4 for 75 yards, capping off the drive with a passing touchdown, his fourth passing TD this season … Threw a pair of TD passes to freshman WR Luke Grimm on the afternoon … Then connected with Takulve Williams for a successful two-point conversion to bring the score to 20-45 with 1:26 to play in the third quarter … Kendrick’s 166 yards through the air marked a new career high for the junior quarterback after he threw for 156 yards in KU’s season opener against Coastal Carolina, going 15-of-24 to his receivers … Against TCU, he was 11-of-18 for the 166 yards and two touchdowns … at Texas Tech: Made his second start of the season at QB for the Jayhawks … Completed 17-of-29 passes for 102 yards and rushed the ball 15 times for 23 net yards.

2018 (So.): Saw action in four games before taking a redshirt … Completed 11-of-18 passes, good for 100 yards and one touchdown … Also credited with 47 yards rushing and a TD on 16 carries … Nicholls: Made his KU debut … Completed 2-of-3 passes, good for 12 yards … Also carried the ball four times for a total of one yard … at Central Michigan: Completed his lone passing attempt for a career-long 15 yards … Rushed four times for 17 yards, including a career-long 13-yard carry, against the Chippewas … Rutgers: Passed for 66 yards going 6-of-10 on the day, including his first-career touchdown … Threw a six-yard scoring strike to WR Jeremiah Booker … Rushed for 31 yards on six attempts, recording his first rushing touchdown on the ground … at Baylor: Passed the ball four times for seven yards and rushed for four yards on four attempts before leaving the game with an injury.

2017 (Fr. at College of San Mateo): Rated a three-star recruit by Rivals.com … Saw action in 11 games, starting nine …  Threw for 1,889 yards and 18 touchdowns … Completed 103-of-178 passes, with a long completion of 91 yards … Also rushed for 417 yards and five scores on 103 carries … Helped lead San Mateo to an 11-2 overall mark and a runner-up finish in the California Community College Athletic Association (CCCAA) state championship game … Played for head coach Larry Owens at CSM.

High School: Helped lead Valley Christian HS to a state runner-up finish and an 13-2 mark as a senior … Played for head coach Mike Machado at VCHS … Earned All-CIF honors in 2016 … Also named co-NorCal Quarterback of the year as a senior.

Personal: Son of Rachell Argell and John Lee Kendrick Jr. … Majoring in communication studies with a minor in business.