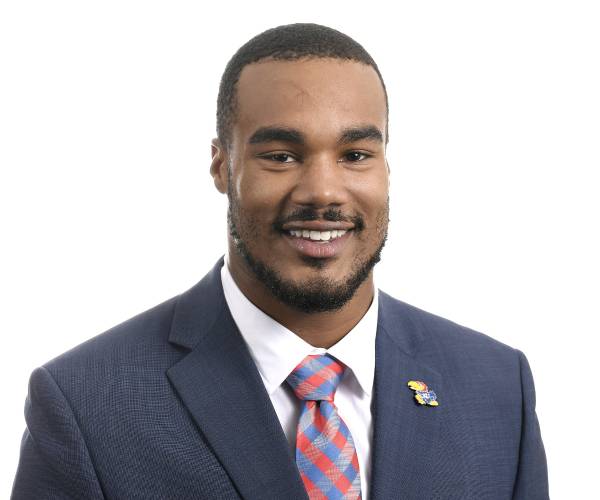 2019 (Sr.): Played in each of KU’s 12 games on the season, earning a start at Boston College … Seventh among Jayhawk defenders with 44 tackles made (34 solo, 10 assisted) … Included were 8.5 tackles-for-loss, which was tops on the team, for a loss of 19 yards … Also contributed 0.5 sacks for a loss of three yards … Made two interceptions and broke up another pass. Indiana State: Saw playing time but did not record any stats … Coastal Carolina: Contributed three solo tackles to the Jayhawks’ defensive effort against the Chanticleers … Also had two tackles-for-loss (TFL) … at Boston College: Made his first start of the season at linebacker in Chestnut Hill … Tallied five tackles (two solo, three assisted against the Eagles, a new career high … Also recorded one TFL of two yards … West Virginia: Made a then-career high five tackles against the Mountaineers … Credited with 0.5 sack for a loss of three yards, another Kansas career best … Also registered 1.5 TFLs for a loss of four WVU yards … at TCU: Set a new career best at KU in tackles with a total of six (five solo, one assisted) … Oklahoma: Picked off one of Jalen Hurt’s passes at the beginning of the fourth quarter, which tied his Kansas career high … Made two solo tackles against the Sooners … at Texas: Picked off his first pass of the season in the fourth quarter, good for his third interception as a Jayhawk … Returned the INT two yards … Also contributed four solo tackles against the nationally ranked Longhorns to help lead KU’s defensive effort in Austin … Texas Tech: Matched his season and career highs in tackles with six (all solos) in the Jayhawks’ 37-34 Homecoming win over the Red Raiders … Also broke up the first pass of his season and KU career … Kansas State: Made two solo stops on defense for KU in the annual Dillons Sunflower Showdown … at Oklahoma State: Recorded a pair of solo tackles against the nationally ranked Cowboys in Stillwater … Also had one TFL for an OSU loss of two yards … at Iowa State: Tallied four total tackles (three solo and one assisted) against the Cyclones … Also had 1.0 TFL in Ames (for a loss of two yards) … Baylor: Closed out his Kansas career with four tackles against the nationally ranked Bears, three solo and one assisted … Also registered 1.0 TFL for a loss of two yards.

2016-17 (RFr.-So. at ASA College): Rated a three-star recruit by Rivals.com … Earned First Team All-Northeast Conference in 2017 … Credited with 33 total tackles, including a team-best 12.5 tackles-for-loss … Also registered 9.5 sacks and a blocked kick on the season … Helped lead the Avengers to a 9-1 overall record and a win in the Valley of the Sun Bowl as a sophomore … Suited up for head coach Joe Osovet at ASA.