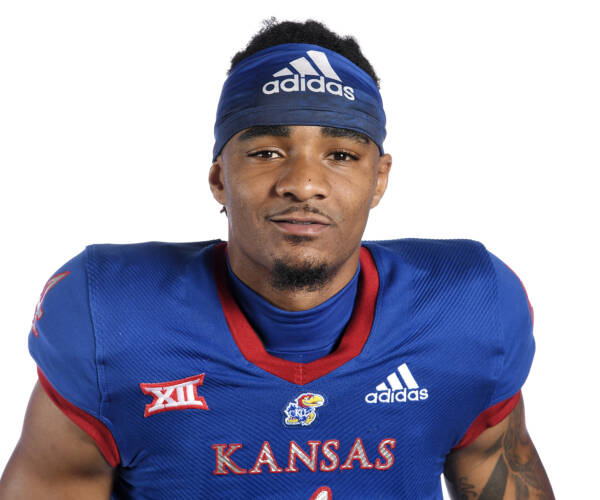 2020 (Sr.): Played in eight of KU’s nine-game season, starting seven of those contests for the Jayhawks as a wide receiver … The team’s second-leading receiver on the year with 24 receptions for 197 yards and two touchdowns … Those numbers were good for an average of 8.2 yards per catch with a long reception of 43 yards at WVU … Also carried the ball once for KU on the season, good for a 10-yard gain. Coastal Carolina: Started the season opener at wide receiver for the Jayhawks … Recorded six catches for 54 yards and one touchdown … The TD reception was the eighth of his KU career … at Baylor: With three catches for 14 yards against the Bears, he has now caught a pass in each of his 14-career games with the Jayhawks … Oklahoma State: Started at wide receiver against the Cowboys, making two catches for seven yards … at West Virginia: Hauled in six receptions for 65 yards on the afternoon in Morgantown … Scored a touchdown on a 43-yard strike from quarterback Miles Kendrick to give Kansas an early 10-0 lead over WVU in the first quarter … at Kansas State: Started his fourth game of the season at wide receiver for the Jayhawks … Did not record any stats in the game … Iowa State: The senior’s 15-yard reception in the first half is the second longest reception of the season … Only his 43-yard touchdown at West Virginia was longer … A pass from Parchment to fellow wide receiver Kwamie Lassiter II was the second two-point conversion completed by the Jayhawks this season … The last successful two-point conversation was against Coastal Carolina in the season opener … This was Parchment’s second two-point conversion pass, previously against Texas Tech on October 26, 2019 … at Oklahoma: Hauled in three passes for a total of 25 yards against the Sooners … Also rushed the ball once for a gain of 10 yards … TCU: Started his seventh game, out of eight, this season at WR … Caught one pass for five yards against the Horned Frogs.

2019 (Jr.): Earned Honorable Mention All-Big 12 accolades at the conclusion of the season as both a wide receiver and the league’s Offensive Newcomer of the Year … Named the Big 12 Newcomer of the Week following the West Virginia game … Started all 12 games at WR for the Jayhawks … KU’s leading receiver for the year with 65 catches for 831 yards and seven touchdowns … Those numbers were good for averages of 12.8 catches per game and 69.2 yards receiving per game … His long catch of the year was for 75 yards … Also made two solo tackles. Indiana State: Started at wide receiver in his Jayhawk debut … Led the Jayhawks in receptions and receiving yards with eight catches and 121 yards receiving, respectively … Coastal Carolina: Recorded three receptions on the night for a total of 14 yards … at Boston College: Connected with quarterback Carter Stanley for two touchdowns in Chestnut Hill … Hauled in eight catches (tying his KU career best) for an even 100 yards of receiving on the night … His 37-yard reception was the longest of his Kansas career thus far … West Virginia:Named the Big 12 Conference Newcomer of the Week after his performance against the Mountaineers, the first Jayhawk to be recognized by the league office during the 2019 season … Led the KU offense with 132 yards on five receptions, including two touchdowns … Connected with quarterback Carter Stanley in the third quarter for a 75-yard TD reception that brought the Jayhawks within three points of WVU with just over four minutes remaining in the period … at TCU: Caught four passes on the day, totaling 10 yards, with a long reception of eight yards … Oklahoma: Recorded four receptions on the afternoon for a total of 45 yards … His long catch of the day was a 12-yard gain … at Texas:Hauled in three passes from Jayhawk quarterback Carter Stanley on the night, good for 83 yards … One of those catches came in the end zone, resulting in a touchdown, his fifth of the season … Texas Tech: Had his fourth 100-plus receiving yard game of the season in KU’s 37-34 Homecoming victory … His seven receptions on the evening amounted to a total of 109 yards through the air from senior quarterback Carter Stanley … One of those seven receptions was a 70-yard touchdown early in the fourth quarter … Kansas State: Made five receptions for a total of 49 yards in the annual Dillons Sunflower Showdown, with a long reception of 23 yards … at Oklahoma State: Caught five passes for 39 yards through the air against the nationally ranked Cowboys in Stillwater … at Iowa State: Made his 11th-consecutive start at wide receiver for the Jayhawks this season … Caught a season and career-high-tying eight passes on the afternoon from quarterback Carter Stanley … Gained 86 total yards on those eight catches, with a long reception of 25 yards … Baylor: With his 11-yard TD reception in the third quarter from QB Manny Miles, recorded his seventh TD reception of the season, moving him into a seven-way tie for eighth place on the list for TD receptions in a season … Totaled five catches for 43 yards on the afternoon, with a long catch of 11 yards.

Iowa Central CC (2018): Rated a three-star according to 247Sports.com, coming in at number 60 overall in their JUCO rankings … Hauled in 23 catches, good for 227 yards and two touchdowns … Played for head coach Jesse Montalto at ICCC.

High School: Recorded 1,700 yards with 12 touchdowns as a versatile offensive player at Cypress Bay HS … Helped team tally 23 points per game in senior season … Rated as the No. 46 prospect in the Miami Herald’s Broward recruit rankings.

Personal: Son of Lauriann and Andrew Parchment … Plans to major in sociology … Chose Kansas over offers from UNLV, Ball State and Hawaii.