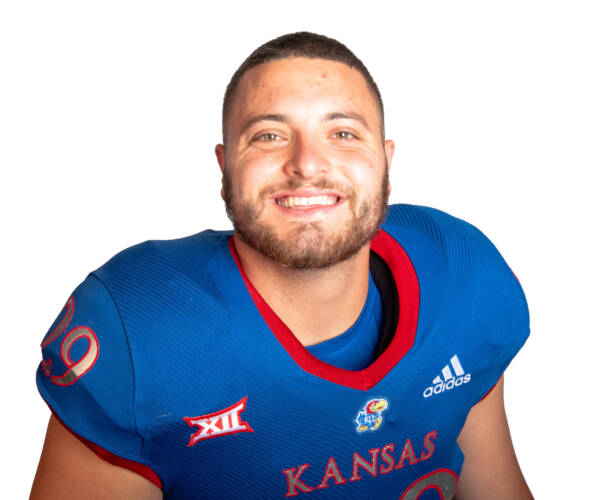 2020 (Jr.): Played in each of the team’s nine games throughout the season, earning starts in both the season opener and season finale … Caught three passes for eight yards, an average of 2.7 yards per catch … On special teams, returned a pair of kickoffs for a total of 15 yards, with a long return of eight yards. Coastal Carolina: Started the season opener at fullback, did not record any stats … at Baylor: Saw playing time against Baylor, but did not record any stats … Oklahoma State: Caught one pass for one yard against the Cowboys on Homecoming … at West Virginia: Returned a kickoff eight yards against the Mountaineers while playing in his fourth game of the season … at Kansas State: Saw playing time in the Dillons Sunflower Showdown without recording any statistics … Iowa State: Returned one Cyclone kickoff for seven yards … Has now played in each of the team’s first six games of the season … at Oklahoma: Caught one pass for a gain of seven yards against the Sooners in Norman … TCU: Made his eighth appearance of the season against the Horned Frogs … Caught one pass, without any gain … at Texas Tech: The team’s starter at FB in Lubbock, while seeing playing time in each of the nine games this year … Did not record any stats against the Red Raiders.

2019 (So.): Earned Honorable Mention All-Big 12 honors at the conclusion of his first season in Lawrence … Played in all 12 of KU’s games, earning starting nods on the Jayhawk offense in eight of those contests … Carried the ball three times and made one reception throughout the season … Returned one kickoff for a 12-yard gain … Also made a solo tackle. Indiana State: Made his Jayhawk debut, starting at fullback … Coastal Carolina: Started at fullback vs. the Chanticleers … Returned one kickoff for 12 yards … at Boston College: Started his third-consecutive game for Kansas … Did not record any statistics … West Virginia: In the starting lineup, at fullback, against the Mountaineers … at TCU: Tallied the first tackle of his collegiate career against the Horned Frogs … Oklahoma: Returned to Kansas’ starting lineup at fullback against the Sooners … at Texas: Caught one pass from quarterback Carter Stanley to record his first reception of the season as well as his career … His catch was good for a gain of two yards … Texas Tech: Carried the ball one time for a gain of one yard in the Jayhawks’ Homecoming victory over the Red Raiders … Kansas State: Rushed the ball once (without a gain) against the Wildcats in the annual Dillons Sunflower Showdown …at Oklahoma State: In the starting lineup for the Jayhawks in Stillwater, his eighth start of the season … Did not record any statistics against the nationally ranked Cowboys … at Iowa State: Carried the ball one time against the Cyclones in Ames … Baylor: Played in his 12th game in the team’s season finale against the Bears in Lawrence.

2018 (RFr.): Appeared in one game for Texas A&M, providing the Aggies with quality depth at fullback.

2017 (Fr.): Redshirted his first season of collegiate football while at Nebraska.

High School: Played for Dale Wiener at Catholic HS in Baton Rouge, Louisiana … Regarded as one of the nation’s top fullback prospects … As a senior, helped Catholic High to a 10-3 record and a trip to the quarterfinals of the Division I state playoffs … Had 49 carries for 236 yards and two touchdowns, caught 22 passes for 223 yards and two touchdowns … Named a team captain during his senior season and was an all-district choice … A key part of Catholic High’s success in 2015 as the team posted a 10-3 record and went on a playoff run that led to a Division I state championship … Member of the 2014 campaign when Catholic High reached the state quarterfinals. … Regarded among the top three fullbacks in the nation by all major recruiting outlets … Ranked as the No. 22 overall prospect in Louisiana by ESPN and as the No. 34 player in Louisiana by Rivals.com.