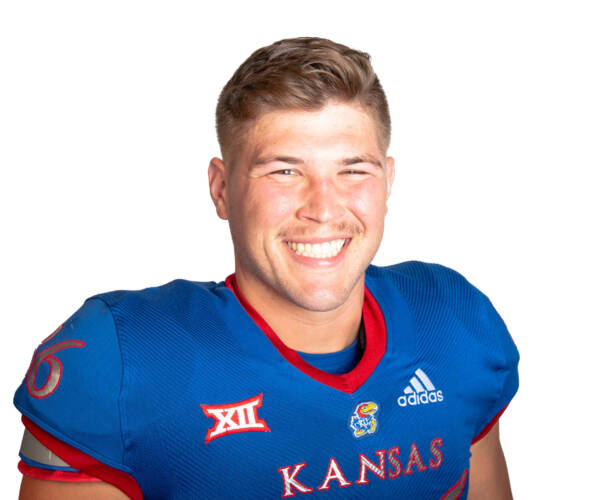 2021 (R-Jr.): Saw action in nine games for KU on special teams, while making one assisted tackle on the year against Kansas State.

2020 (So.): Academic All-Big 12 Football First Team … Played in each of KU’s last four games of the season. Iowa State: Made his first appearance of the season against the Cyclones … Did not record any stats … at Oklahoma: Played in his second-straight game in Norman … TCU: Saw playing time against the Horned Frogs without recording any stats on the afternoon … at Texas Tech: Played in Lubbock against the Red Raiders, his fourth-straight game seeing action for the Jayhawks.

High School: Earned four letters playing for head coach Mike Gehrer at Wichita Collegiate HS … Helped lead Collegiate to a Kansas Class 3A state runner-up finish in 2015 … During his time with the Spartans, WCHS was a one-time sub-state champion, three-time district champion, three-time regional champion and a one-time league champion … Earned all-league honors in 2015, 2016 and 2017 … Picked up all-state honors for three-straight years (2015-17) … Named to the Wichita Eagle All-Metro Team in 2017 … A four-year member of the WCHS honor roll.

Personal: Son of Kelli and David Copeland … Has two brothers, Mitch and Myles … Mitch currently plays football at K-State and Myles was on the Wildcat roster from 2012-15 … Majoring in pre-business.