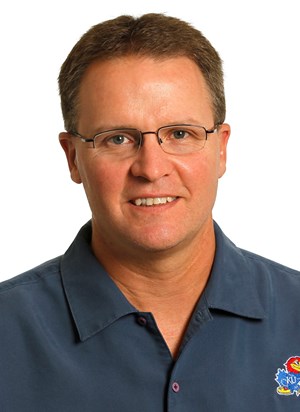 Heading into his 21st season with the Jayhawks, head coach Clark Campbell has created a winning tradition and strong culture within the swimming and diving program evident by a eight-year stint (2014-21) where Kansas claimed seven second-place finishes, including four-straight from 2019-22.

During the 2021-22 season, Campbell coached the Jayhawks to their fourth-consecutive second-place finish at the Big 12 Championships with a final team score of 618 points. Campbell coached the Jayhawks to three school records in 2021-22, set by senior Kate Steward in the 100 and 200 breaststroke. Steward would go on to qualify for the NCAA Championships in the 100 breaststroke, placing 31st overall.

In 2020-21, senior Manon Manning captured the 200-yard backstroke Big 12 title to become the first Jayhawk to win the event. Manning also made her NCAA Swimming Championships debut qualifying in the 100-yard and 200-yard backstroke.

At the 2020 Big 12 Swimming & Diving Championship, Kansas set a new program record scoring 831.0 points to earn a second-place finish. Campbell led sophomore Kate Steward to becoming a Big 12 Champion in both the 100-yard and 200-yard breaststroke while setting program record in both events. Campbell also helped lead Haley Downey to a second-place finish in the 200-yard breaststroke behind Steward. Campbell also coached Dewi Blose and Jiayu Chen to being named CSCAA All-Americans after the two qualified for the NCAA Swimming and Diving Championships that were canceled due to Covid-19. The 2020 ream was also selected to CSCAA Scholar All-America Team for the spring semester to mark the 36th-consecutive semester the program was recognized.

During the 2018-19 season, Campbell directed the Jayhawks to eight first-place finishes in dual meets and a second-place finish at the 2019 Big 12 Swimming & Diving Championship with a, at the time, program record of 754.50 points. He was named the Women’s Big 12 Swimming Coach of the Meet.

At the 2017 conference championship, Kansas bested its previous program record scoring 683.50 points for its third second-place finish in four years, with the other two coming in 2016 and 2014, where Campbell was named the league’s Swimming Coach of the Year both times.

In 2016, Kansas registered a then-program-best 650.5 points at the meet while finishing second. En route to that performance, Campbell saw 25 Jayhawks turn in top-eight performances and 20 Jayhawks make ‘B’ finals, all contributing to their final point total.

As a result of that 2016 conference meet, Campbell was named Big 12 Coach of the Year for the second time in his tenure. The other came in 2014 when he led KU to its first-ever top-two finish at the Big 12 Championships. This time, Campbell was accompanied by All-American Chelsie Miller, who was honored as 2016 Big 12 Swimmer of the Year. Campbell coached Miller to three-consecutive NCAA Championship bids, including her top-eight finish in the 400-yard individual medley at this past year’s championship meet. Miller earned All-America honors in all three appearances, receiving First Team accolades for the first time in 2016 and the first Jayhawk to finish in the top-eight at NCAAs since 1993.

During the 2013-14 season Campbell coached Kansas’ first Big 12 Champion, Chelsie Miller, to victory in the 400-yard individual medley. In the same season, the decorated coach also led the Jayhawks to their first top-two finish in 18 years.

KU’s dominance in the pool over the years has brought Campbell to a 137-60 dual meet record in 19 seasons at Kansas, and to a mark of 218-112 overall during his coaching tenure.

Campbell’s laid-back and genuine demeanor helps build close relationships with each of his swimmers outside of the pool. Not only does he care about making his swimmers better in the pool, but also in the classroom. Campbell’s team has been named by the College Swimming Coaches Association of America (CSCAA) – the organization he serves as president – as a national Academic All-American Team, earning a team GPA of 3.0 or higher, all 36 semesters he has managed the program.

Attention to detail is what makes Campbell’s practices productive. Every set he organizes for the swimmers has scientific reasoning behind why it works and will ultimately lead to success. His team at KU has placed in the top-four at the Big 12 Championships all 19 seasons. At Kansas, Campbell has coached 20 swimmers to NCAA Championship appearances.

COACHING BEFORE KANSAS
Prior to his appointment at KU, Campbell coached at the University of Evansville for three years. There, he led several athletes to success at the national level and helped the program reach new heights. The Purple Aces established school records in all 19 men’s and women’s events while Campbell was at the helm of the program in 1998. Those top marks included 12 Missouri Valley Conference records.

During his four years at Evansville, his squads were named Academic All-America by the CSCAA all eight semesters. In 2000, Campbell was named the Missouri Valley Conference Men’s and Women’s Swimming Coach of the Year.

From 1995-98, Campbell served as the assistant men’s swimming coach at the University of Minnesota. During his time in Minneapolis, the Golden Gophers captured Big Ten conference titles in 1996 and 1998 while earning top-15 finishes all three years at the NCAA Championships.

Campbell served as the head coach of the men’s and women’s programs at West Virginia Wesleyan from 1993-1995 and directed the school into a top-10 National Association of Intercollegiate Athletics program in just two years. He was named the NAIA Swimming Coach of the Year in 1995.

PERSONAL
Campbell competed as a professional triathlete for seven years before his coaching career began. After turning professional at the age of 19, he became one of the most consistent top-10 finishers on the pro circuit. During his career, Campbell was self-coached. He was the 1986 National Long Course Champion and the 1990 runner-up at the United States Triathlon Series National Championship.

Campbell received a Bachelor’s degree from Kansas in 1993, and a Master’s in physical education/coaching from West Virginia University in 1995. Campbell and his wife, Cassie, have three children: Canaan, Cierra and Claire, who is a junior on the KU swim and dive team.