As the Kansas men’s basketball team prepares to face off against Davidson for just the third time in school history this weekend, let’s take A Look Back at the first time the two matched up.

On March 30, 2008, Mario Chalmers and the Jayhawks took on Steph Curry and the Wildcats in an Elite Eight game that featured nine ties and seven lead changes.  At the end, Kansas stood victorious, 59-57, cut the nets and raised the NCAA Regional Championship trophy at midcourt. The win earned the team a trip to the program’s 13th Final Four.

The full recap from KUAthletics.com follows: 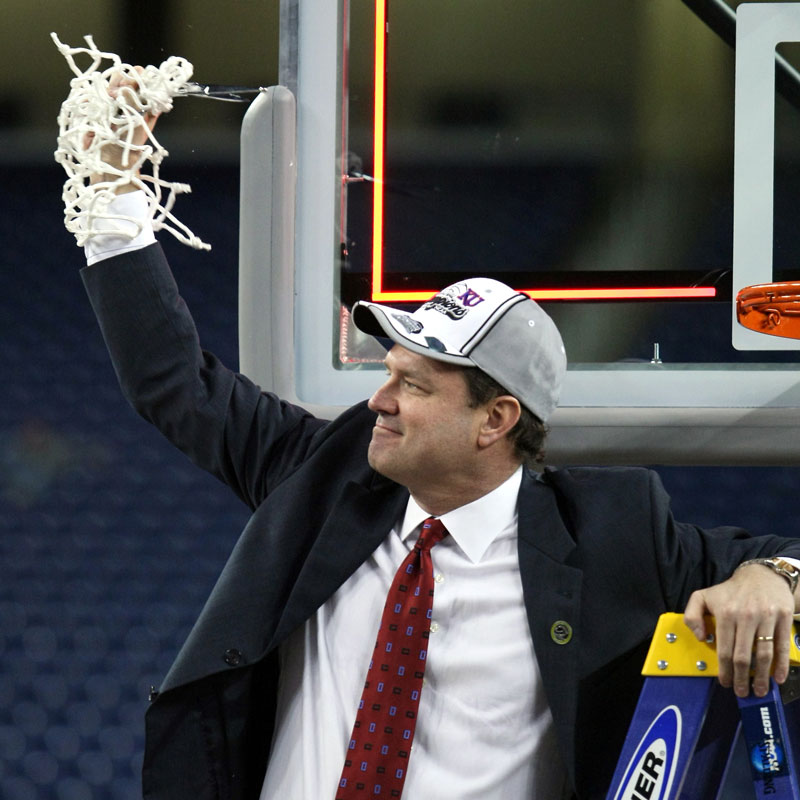 In a game that saw nine ties and seven lead changes and had everyone in the stands on the edge of their seats, Kansas picked up the win on the defensive end when Davidson saw its last second shot fall left of the rim, and the celebration began.

An NCAA preliminary round record 57,563 fans saw Kansas improve to 35-3 overall. The win total ties the highest in school history. Davidson ended its Cinderalla run through the tournament with a 29-7 record.

Despite the thrilling finish, both teams were ice cold at the outset. By the 14 minute mark the score was just 4-2 in favor of KU with each squad struggling to knock down open shots.

By the 10 minute mark the score was knotted at nine. Mario Chalmers hit a three to put KU up 12-9. But Davidson sophomore Stephen Curry, one of the biggest stories of this year’s NCAA Tournament, answered with his first bucket on a three next time down the floor. From there, both teams started to find their comfort zone.

Chalmers finished the half with 11 points including 3-of-3 shooting from beyond the arc. Darrell Arthur and Darnell Jackson each pulled down five rebounds in the half as KU dominated the glass 22-13. After being held scoreless for over 10 minutes, Curry led Davidson and all first-half scorers with 15 points.

Kansas was hampered by nine early turnovers, including several unforced, but Davidson was unable to capitalize, cashing those miscues in for only six points. Kansas’ greatest advantage in the first half was in the paint where the Jayhawks were able to outscore the Wildcats 20-14, including the final bucket of the period to take a 30-28 lead into the locker room.

Heading into intermission, neither team seemed to have the upper hand after seven ties and three lead changes.

The first five minutes of the second half were essentially a continuation of the first with the two teams feeling each other out and the crowd waiting for one team to make its move.

Beginning at the 15 minute mark it became a battle. KU made the first move when it went on a 10-4 run punctuated by a fast break dunk by Jackson to go up 45-41 with 11:20 on the clock. Davidson kept its composure and scored the next eight to reclaim a 49-45 lead.

With everyone in the arena holding their breath on every possession, neither team could gain a comfortable lead.

Trailing 49-51 with just over seven minutes left, Kansas went on a 12-2 run in which five different Jayhawks scored over a six minute stretch to take 59-53 lead with just over a minute to play.

True to form, Davidson did not give in and scored the next four on a Thomas Sander free throw and a Curry three. The trey by Curry with 55 seconds left were his first points since nearly the nine minute mark.

With 16 seconds left and the score 59-57 in favor of KU, Davidson had the ball and called timeout. With one second left, Davidson senior Jason Richards heaved a 3-pointer that sailed left of the rim to seal the Jayhawk win and Kansas’ 13th trip to the NCAA Final Four.

Rush, Chalmers and Kaun were named to the NCAA Regional All-Tournament team along with Curry (MVP) and Richards of Davidson.

Kansas will play North Carolina on Saturday, April 5 at the Alamodome in San Antonio, Texas in the second game. Memphis and UCLA will play the first game at 5:07 p.m., Central time.

It marked the first time in the history of the NCAA Tournament that all four No. 1 seeds advanced to the Final Four.