RCW: The path to greatness

It’s two o’clock on a Tuesday afternoon in Allen Fieldhouse.  It’s gameday. The entrance of the Fieldhouse is riddled with students participating in the long-standing tradition of camping, hoping to get front row seats to tonight’s game against Long Beach State University. The sound of sneakers squeaking across the court and basketballs slamming into the hardwood echoes throughout the empty Fieldhouse. Outside of the basketball managers, Frank Mason III and Devonte’ Graham are two of the first players on the court.

The atmosphere is calm and relaxed. Unlike the exhilarating, unmatched roar of the Jayhawk Nation that will overcome the calm presence in just a few hours.

Graham and Mason shoot around and warm-up as the rest of their teammates trickle in one by one.  Graham, with that smile that he is so well known for, shoots the ball and then looks over to Mason, clearly making some sort of comment or joke. And there it is—laughter. It’s as if, in that moment, Graham knew exactly what to do, exactly what to say, to make the straight-faced, ever-serious Mason crack a smile.

Most children have big dreams of what they want to be when they grow up. The sky is the limit—a ballerina, an astronaut, a princess, a dragon. If it can be imagined, it’s a possibility.

For some, those dreams eventually fade away and are replaced with something a little more realistic. However, there are those who hold onto their dreams beyond the innocence of childhood, clinching onto them as if they know life is going to eventually attempt to destroy those dreams. Mason and Graham had big dreams growing up. Little did they know, their dreams of playing basketball would eventually merge and bring them together in the historic place where the game of basketball began. 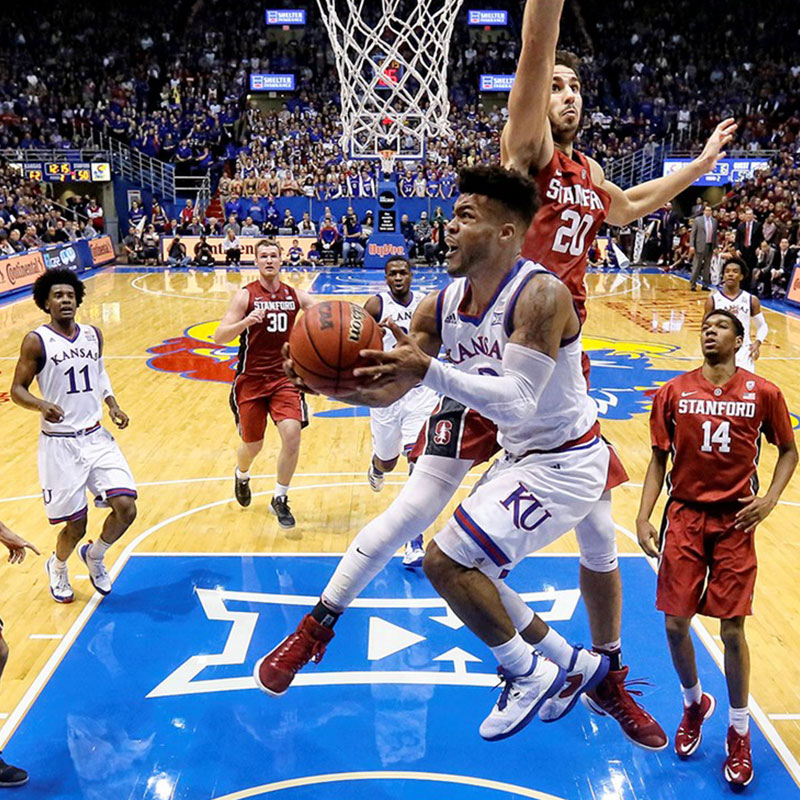 “When we played in our tournaments in elementary at our local high school, I think I used to average like 25 points,” Mason said. “Everyone used to tell me how good I was and how good I could be. I took it and ran with it.”

His dreams of one day playing in a larger arena were becoming more and more of a reality with each passing basketball game.  However, life was not going to hand Mason his dream of playing basketball on silver platter. Growing up in Petersburg Mason was constantly surrounded by violence and negative influences. He and his friends were frequently in trouble, but Mason knew if he wanted his dream to become a reality, he would have to take the road less traveled. His mom, Sharon Harrison, showed him the way. She motivated him. She taught him to believe in himself. So, Mason held on to his dream. He wasn’t going to let anything or anyone take it away from him. 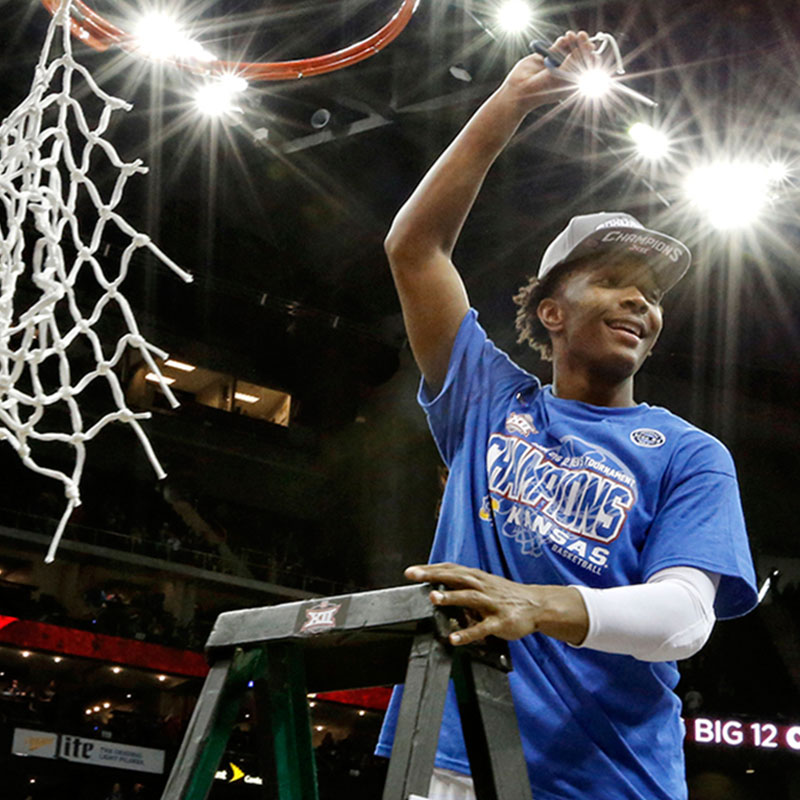 About 150 miles away from Mason, in Raleigh, North Carolina, a little boy by the name of Devonte’ Graham also began to dream of playing basketball, not knowing that his current teammate was a couple of hours away with the same big dreams, headed in the same direction. However, much like Mason, Graham’s path toward making his dreams a reality would not be without its hardships. Graham was born with the deck stacked against him. His mom, Dewanna King, was 14 years old when she gave birth to her son. Being a mom at 14 is task that some might write off as impossible, but King found a way.

At the age of four, Graham’s mom put him in a rec league where Graham fell in love with the game of basketball. He would later join an AAU team, where he really began to start his development into the athlete he is today. This is where he truly began to dream. Growing up, Graham looked up to athletes like Allen Iverson, Steve Francis and Tracy McGrady. He began to watch other athletes and even played against some of the best in the country. He knew basketball is what he wanted to do—it’s what he was meant to do. He wanted to be like them, and he knew he could do it.

Both Mason and Graham would continue on their separate paths pursuing their goals and dreams. They even crossed paths at a brief moment on their journey to Kansas, both vaguely remembering a time when their AAU teams played in the same tournament.

“I watched him play a tournament against my older AAU squad,” Graham said.

“We actually played against each other when we were younger, in AAU,” Mason said.  “I can’t remember how old were, but we were really young.”

Despite the difference in stories, it seems inevitable that these two were meant to cross paths.

As Graham and Mason entered high school, their stories begin to have a sort of symmetry to them. Even though Mason is a year ahead of Graham in school, their stories are similar. Both young men had exceptional high school basketball careers. Mason was a four-year standout at Petersburg High School, where he was named the 2012 Metro Player of the Year and helped guide his team to two state championship appearances. Mason scored 1,901 points during his four years at Petersburg High School, only coming in second to NBA Hall of Famer Moses Malone.

Graham attended Broughton High School in Raleigh where he helped the junior varsity team go undefeated his freshman year. He then went on to play varsity his next three years at Broughton and led his team to a 4A state championship appearance in which he averaged 15.7 points and 5.4 assists.

Both young men would head toward the end of their senior years with opportunities to play college basketball. Mason signed to play at Towson University in Baltimore, Maryland, while Graham signed a letter of intent to play for the Appalachian State Mountaineers. These two paths would send them in completely different directions. Both thought that was as good as it was going to get, but in a twist of events both Graham and Mason made decisions that would pull them out of their original commitments and point them in the direction of Lawrence, Kansas.  Both young men continued to cling to that childhood dream that life was so desperately trying to take away.

Mason had to forego Towson University and ended spending a year at Massanutten Military Academy where he honed in on his basketball skills. He helped lead the Colonels to a 30-4 record and advanced to the National Prep Championship Elite Eight. It was during this part of his journey where earned the attention of colleges like Virginia Tech, South Carolina, Louisville, Rutgers and the school that would eventually become his home—Kansas. Before he knew it, he was a Jayhawk. He never thought the dreams he had as a child would bring him to this place, a place rich with the history of the game he loves so much.

“I had no idea that I would end up here,” Mason said. “I thought Towson was it for me, but my year in prep school opened up my recruitment and gave me the opportunity to come to Kansas.”

While Mason was going through his first year as a Jayhawk, Graham was released from his commitment to Appalachian State and, like Mason, he decided to attend prep school. Graham excelled at Brewster Academy where he led his team to the National Prep Championship and the New England Championship. That season, Graham averaged 17.2 points and five assists per game, attracting the attention of the Jayhawks, North Carolina State and Virginia. Then, on May 2, 2014, Graham made the decision that would finally put him and Mason on the same court, in the same jerseys, living out their childhood dreams–together.

“I never thought I would end up here,” Graham said. “It wasn’t until I went to Brewster, my extra prep year, that I had the confidence to know that I could actually play at a higher level.”

Mason and Graham’s individual paths have helped shape them, mold them and groom them into the nationally recognized duo they are today. Although they entered KU at two different times, they both came in with a chip on their shoulder and a point to prove—and that’s exactly what the tandem that has been given the title of “the best backcourt in the nation” did.  Each, individually, is the type of player most athletes aspire to be, but there is something about the combination of the two that leaves people in awe. 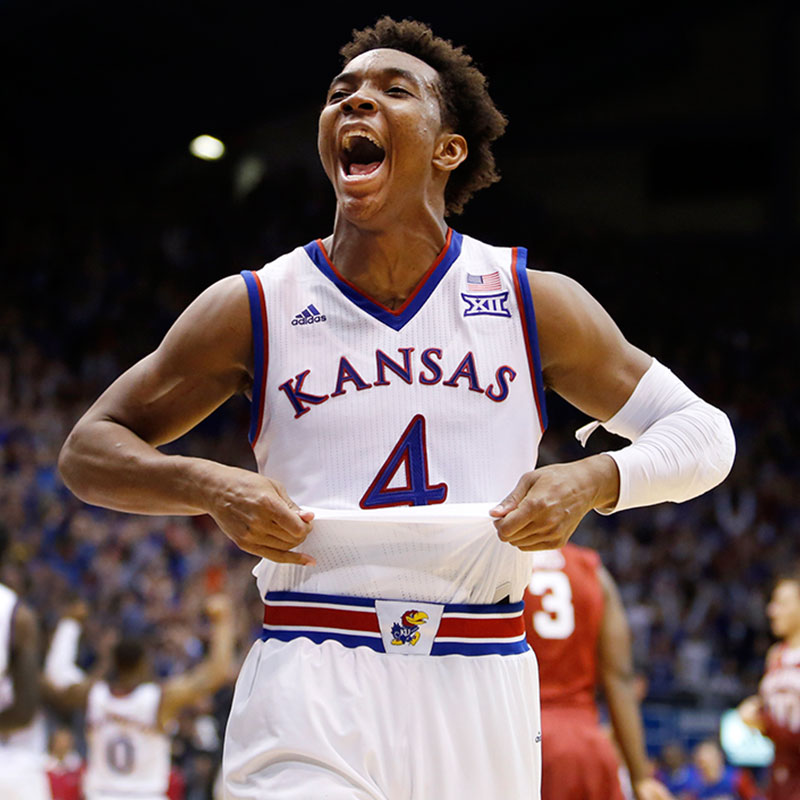 “It’s one thing to say a team has a very good backcourt,” said ESPN analyst Fran Fraschilla. “It’s a whole other thing to say that a team has two outstanding players who make each other better. They do that more so than any other backcourt duo in the country. They look for each other. They cover for each other. The whole is better than the sum of the parts because of how well they play together. People can argue about whether they are the best backcourt in the country, but it’s hard to argue with the fact that these two guys just have a great synergy about them. These guys play for each other without worrying about who’s getting the glory.”

The relationship Mason and Graham have is deeper than just basketball. They have a certain chemistry on the court and a friendship off of it. When put in the spotlight one always seems to humbly praise the other.

“[Frank is] definitely one of the toughest players I’ve played with,” Graham said. “He’s just a great person. He brings out the best in me. He made me a better defensive player.”

“Devonte’ is always smiling,” Mason said. “He’s never in a bad mood and he brings so much great energy on and off the court. He’s helping me with my personality on the court. Watching him full of smiles and seeing him enjoy every play every game, I’m trying to do the same thing. He’s just a great person.”

Today, it’s hard to imagine Kansas men’s basketball without Mason and Graham. They both feel they have worked extremely hard to get to this place. Even with people doubting them, and circumstances in life making it more and more difficult for them to hold onto their dreams, that’s exactly what they did. They held on and they fought to get to this place. They proved wrong those who doubted them. They took the road less traveled, one that was destined to bring them together. Two dreams, although only for a short period, have become one. When one succeeds, so does the other. In a situation where it’s easy to get a big head and always feel the need to one up the guy standing next you, Mason and Graham choose to lift each other up. 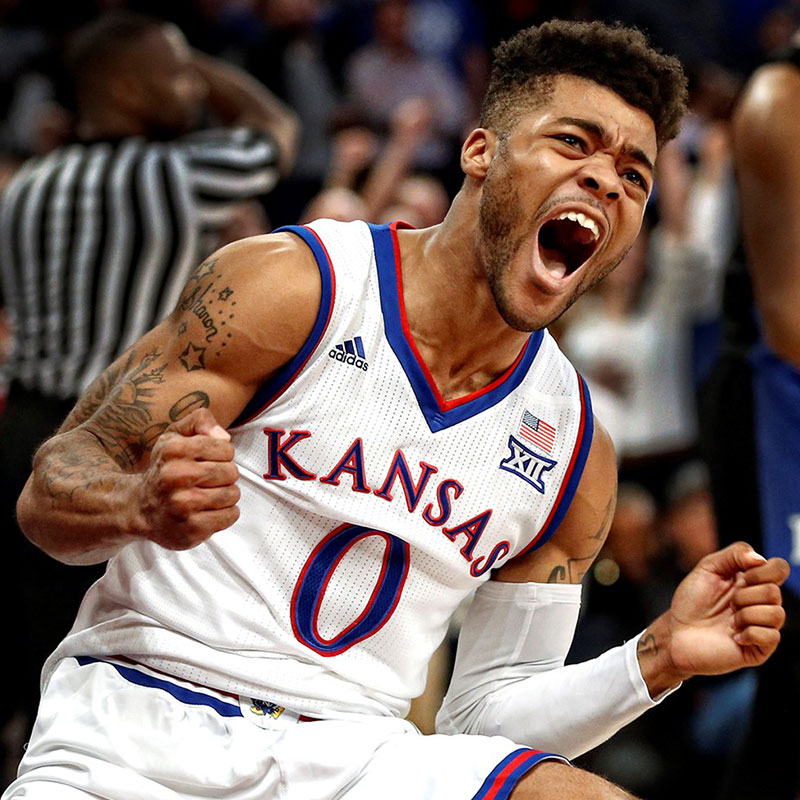 “They are not remotely jealous of each other,” Kansas head coach Bill Self said. “They are happy for each other and they couldn’t care less who gets the credit as long as the job gets done. I think that as good as Devonte’ is, he’s just as happy when Frank has a good game, and I think Frank feels the same way about Devonte’. I think they have become brothers.”

Whether it be their tough childhoods or their alternative route to college basketball, it is clear that Mason and Graham have had to fight for their dreams. They understand each other’s struggle to get to this point and it has helped create a chemistry only the two of them will ever understand.

“There’s something special about the chemistry we have,” Mason said. “We almost had the same route to get here. We both have a chip on our shoulder. I think it worked out perfectly for both of us.”

Even though they will eventually part ways, Mason and Graham will remember, forever, the three years they were able to fuse their basketball dreams together in the place where basketball was created and on the court where legends are made.