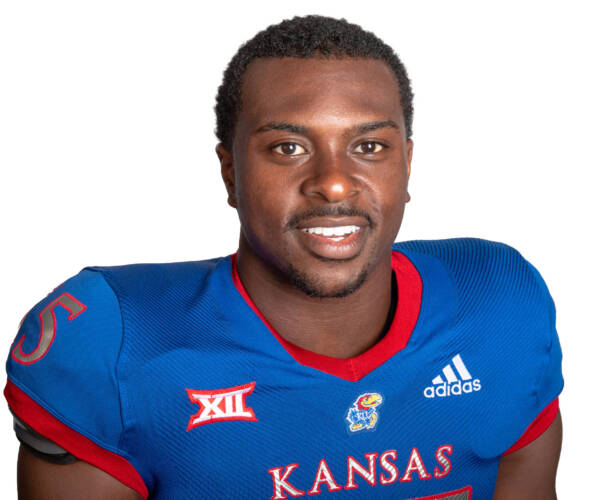 2021 (S-Sr.): Led the Kansas defense with 8.5 tackles-for-loss and 6.5 sacks on the season … Forced four fumbles, the third most in the Big 12, while his 6.5 sacks ranked seventh in the league … Led the Jayhawks with 10 quarterback hurries throughout the season … Also recovered a team-high two fumbles … His 61 tackles in 2021 marked a new career high, finishing his Kansas career with 193 total tackles 12.5 sacks and 22.5 tackles-for-loss … His 61 tackles were most in the Big 12 amongst defensive linemen … Recorded a season-high two sacks at Texas, also forcing two pivotal fumbles … Throughout the 2021 season, he did not go more than two-straight games without collecting at least one tackle-for-loss … According to PFF, Johnson forced 40 pressures in 2021 … In 655 snaps played, he did not commit a single penalty.

2020 (Sr.): All-Big 12 Honorable Mention (LB) … Earned eight starts at the LB position in the nine games played this season … Tied for second on the team with 42 total tackles accumulated throughout the season (27 solo, 15 assisted) … Registered 4.5 TFL of 27 yards … Recorded 3.0 sacks for a loss of 24 yards … Also had one pass breakup and one quarterback hurry on the season, in addition to forcing a fumble. Coastal Carolina: Served as a team captain for the Jayhawks’ season opener … Made three tackles (two solo, one assisted) against the Chanticleers … at Baylor: Has now started both games this season at linebacker … KU’s second-leading tackler against the Bears with six (three solo, three assisted) total, doubling his season high from the previous game … Oklahoma State: Totaled three tackles (one solo, two assisted) against OSU after starting at the linebacker position for KU … at West Virginia: Registered one solo tackle and assisted on three more for a total of four tackles on the day against the Mountaineers … at Kansas State: He and  Kenny Logan Jr., led the defense with six total tackles each … Registered a career-high 2.0 tackles-for-loss , surpassing his high of 1.0, which he had previously set eight times … His sack in the fourth quarter was his first since last season and the fourth of his KU career … Iowa State: Recorded a solo tackle and assisted on a tackle for a total of two tackles on the day … Also broke up one Cyclone pass … at Oklahoma: Recorded his fifth-career sack in the first quarter, taking down Oklahoma quarterback Spencer Rattler for a loss of four yards … Registered his second sack of the day and sixth in his career in the second quarter for a loss of nine yards … Also forced a fumble on his first-quarter sack, his fourth forced fumble of his career and first since last season against West Virginia … His  24 sack yards this season are more than any Jayhawks from last season’s team … Johnson’s nine-yard sack in the second quarter topped both Azur Kamara (3.5-22) and Dru Prox’s (2.0-22) 2019 totals … He is the first Jayhawk since Daniel Wise to record two sacks in a game; Wise completed the feat at West Virginia (10-6-2018) … Johnson also collected seven total tackles (four of the solo variety) which was a new season high; his previous best of six had occurred twice: at Baylor and at K-State … TCU: One of four captains for KU against the Horned Frogs … Collected five solo tackles on the afternoon, tied for second-best on the team in this game … at Texas Tech: One of three players to serve as a team captain for the game … Also one of two LBs in the starting lineup for Kansas in Lubbock, his eighth start of the season while having played in all nine games … Tied for second on the team in tackles with six total (five solo, one assisted).

2019 (Jr.): Earned starts in each of KU’s 12 games of the season at the linebacker position … Fifth on the team in total tackles with 55 (36 solo, 19 assisted) … Third amongst Jayhawk defenders with 5.5 tackles-for-loss (of 22 yards) on the year … Registered one sack for a loss of 13 yards … Broke up one pass and hurried the opponents’ quarterbacks on three different occasions. Indiana State: Started at linebacker in the season opener … Had three total tackles … Coastal Carolina: Recorded a career-high five tackles (all solos) vs. the Chanticleers … Also matched his career best in tackles-for-loss (TFL) with one on the evening … at Boston College: Set a new career high in tackles against the Eagles, totaling seven (three solo, four assisted) … Also recorded one TFL of two yards … West Virginia: One of three KU players to record nine tackles (five solo, four assisted) against the Mountaineers, to lead the team’s defensive effort and record a new career high … Also had one TFL for a WVU loss of four yards … Added one quarterback hurry to his stat line, the first of his collegiate career … at TCU: Contributed seven total tackles (two solo, five assisted) … Registered 0.5 TFL for a Horned Frog loss of a yard … Oklahoma: Matched his season and career high with a quarterback hurry against the Sooners … Made four total tackles (three solo, one assisted) on the afternoon … at Texas: Had one solo and two assisted tackles for a total of three against the Longhorns … Texas Tech: Tallied six solo stops in KU’s Homecoming victory … Also recorded his fourth TFL of the season, and eighth of his career, against the Red Raiders … Kansas State: Made a single solo tackle against the Wildcats … at Oklahoma State: Matched his season/career highs with a quarterback hurry against the nationally ranked Cowboys … Contributed three solo stops to KU’s defensive effort in Stillwater … at Iowa State: Assisted on a tackle in Ames against the Cyclones … Baylor: Helped lead the Jayhawks’ defensive effort against the Bears by making six total tackles (five solo and one assisted), as well as making his first sack and first pass breakup of the season.

High School: Received three-star recognition from Rivals.com … Transitioned to linebacker as a junior at Lamar HS … Accumulated 125 tackles as a senior under head coach Laben Delay … Named to the District 4-6A First Team by district coaches as a senior.

Personal: Son of Broderic and Stephanie Johnson … Has one sibling, Kayron … Graduated from Lamar a semester early and enrolled in KU for the spring 2017 semester … Majoring in human biology.