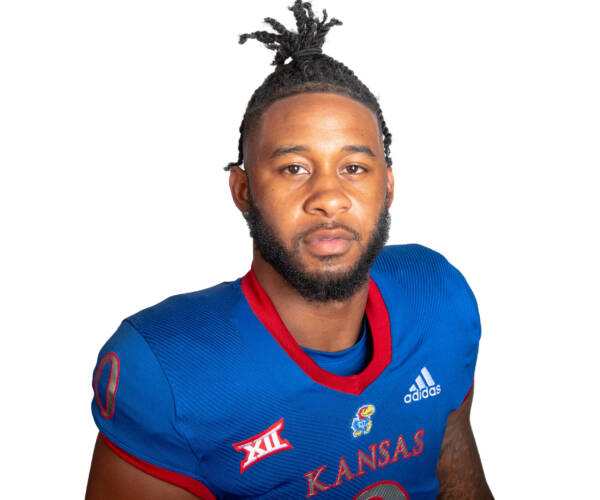 2020 (RSr.): Played in all nine of the Jayhawks’ games this season, earning a starting spot in the lineup on six occasions … Totaled 25 tackles on the season (17 solo and eight assisted) … Forced a fumble and also recovered a fumble, which he returned 45 yards. Coastal Carolina: Saw action at HAWK in KU’s season opener but did not record any stats … at Baylor: Recorded his first stats of the season against the Bears with two total tackles (one solo, one assisted) … Oklahoma State: Collected six tackles (four solo, two assisted) against OSU, setting a new KU-career best … at West Virginia: Started his second-consecutive game for the Jayhawks in Morgantown … Made two solo tackles from the HAWK position … at Kansas State: Made his fifth appearance of the season against the Wildcats without recording any statistics on the day … Iowa State: Earned his third start of the season, this time at nickelback, against the Cyclones … Did not record any stats in his sixth overall appearance on the season for KU … at Oklahoma: Set season and career highs in tackles against the Sooners with eight (three solo) … His previous high came against Oklahoma State earlier this season, when he tallied six tackles … TCU: Registered a solo tackle against the Horned Frogs … at Texas Tech: A starter for KU on defense for the sixth time this season, while playing in all nine games … Toward the top of the leaderboard in tackles with six solos for the game … In the second quarter, he forced the first fumble of his career, while redshirt freshman Marcus Harris fell on the ball … In the third quarter, freshman Karon Prunty forced his first fumble of his career, which Betts scooped up and returned for a gain of 45 yards … The recovery was also Betts’ first of his career.

2019 (RJr.): Played in the first four games of the season … Tallied five total tackles in those four games; four solo and one assisted. Indiana State: Saw playing time in the season opener … Recorded one tackle … Coastal Carolina: Saw playing time vs. the Chanticleers, but did not register any stats … at Boston College: Made two total tackles (one solo, one assisted) against the Eagles, setting a new career high during his time at Kansas … West Virginia: Tied his Kansas career high in tackles with two against the Mountaineers.

High School: Played for Russell Anderson and Terell Harris at Kerens High School … All-state quarterback who helped KHS to the first round of playoffs . . . Also lettered in basketball and track.

As we head into a new season of KU football and I kick off my final year, things are different here at the University of Kansas. We have young players on the rise, a new coaching staff, and bowl-eligibility on our minds.