LAWRENCE, Kan. –Kansas travels to Fort Myers, Florida to play a four-game series with host FGCU at Swanson Stadium Feb. 26-28. The two schools are slated to play a doubleheader Sunday to conclude the series.

The Jayhawks enter the series 2-1 overall, while Florida Gulf Coast is 3-1.

Kansas opened the 2021 season against South Dakota State in Minneapolis Feb. 19-21. The Jayhawks captured game one against the Jackrabbits behind stellar pitching by opening day starter Ryan Cyr and a pair of home runs. Kansas dropped the second game against SDSU, but rallied to claim the series with a 13-1 victory in the series finale.

Cyr along with Sunday starter Eli Davis each earned a victory in the series with Cyr tallying a career-best 11 strikeouts in game one. Nolan Metcalf and Anthony Tulimero led the offensive onslaught against the Jackrabbits, helping Kansas score 25 runs in the three-game series. Metcalf finished the series 6-for-11 with a pair of home runs, while recording a career-high four RBI in the finale. He was named Big 12 Player of the Week. Tulimero caught all three games behind the plate for Kansas and finished 5-for-10 at the dish with a team-leading two doubles and a home run. He plated five runs for Kansas.

The Kansas bullpen was again a strength for the Jayhawks in the two victories. Cole Larsen pitched four innings, allowing only three hits while tying his career-high with nine strikeouts. Larsen earned the save in the series finale after taking over for Davis. Ryan Vanderhei, Nathan Barry, Jake Adams and Jonah Ulane each pitched one inning in the series, not allowing a run in each of their appearances. 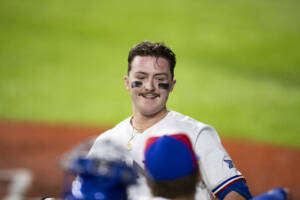 Brian Ellis, Johnny Long and Marc Coffers led the FGCU offense, with Ellis and Long finishing with a .400-or-better average through the four games this last week. Ellis recorded a team-high seven hits to go along with four RBI, while Long also netted four RBI on four hits. Coffers finished last week 6-for-18, boasting the second most hits on the team to go along with three RBI and two doubles.

Mason Studstill led FGCU in innings pitched (6.0), while not allowing a single run. Studstill, Gus Carter, and Tyler Shuck each finished with a team-high six strikeouts. Studstill earned the start on opening day.

CYRIOUSLY BRILLIANT
Ryan Cyr was handed the ball on opening day and did not disappoint. He pitched seven innings and earned the win over South Dakota State. Cyr recorded a career-high 11 strikeouts, which ranked as the highest in the Big 12 and sixth in the NCAA last week.

METCALF | BIG 12 PLAYER OF THE WEEK
Nolan Metcalf finished 6-for-11 with six RBI, two home runs and a walk to be named Big 12 Player of the Week. He ranked in the top-five in eight Big 12 categories during last week’s games, tying for the league lead in RBI, hits, home runs and total bases (12). His slugging percentage of 1.091 tied for second in the conference.

He is the first Jayhawk to be named Big 12 Player of the Week since Jaxx Groshans claimed the honor in the final week of voting during the 2019 season. Everhett Hazelwood, Ryan Cyr and James Cosentino join Metcalf as current Jayhawks to receive a weekly honor by the conference.

UP NEXT
Kansas continues its road trip to start the season at Lipscomb March 5-8 in Nashville, Tenn.