The Jayhawks finished their sixth week of play 2-2, earning a dominate 20-5 win over Lafayette before opening Big 12 play at West Virginia. After dropping the opening game of the series, Kansas again found success behind a strong-pitching performance by Cole Larsen.

Larsen improved to 4-1 on the season, and has pitched eight-or-more innings in his last three starts. Four Jayhawks tallied two-RBI performances in game one of the altered doubleheader against West Virginia. Tavian Josenberger, Nolan Metcalf, Skyler Messinger and Tom Lichty each completed the feat. Casey Burnham finished the 9-2 Kansas victory with the other Kansas RBI.

Lichty completed a successful week at the plate, finishing with a .556 average and eight RBI. Lichty’s six RBI against Lafayette were a career-high and he was the first Jayhawk to have five-or-more RBI in a game this season. Josenberger and Logan Williams each have four-game hit streaks, with Josenberger starting all four games last week. After recording a hit in the series opener against West Virginia, Maui Ahuna extended his reached base streak to 10 games, while Josenberger’s current active streak is at nine.

Everhett Hazelwood is slated to get the start for Kansas on Tuesday, and has appeared in five games this season with four starts. He earned his first victory of the season against Creighton March 20, recording three strikeouts in five innings pitched in the 11-3 victory. 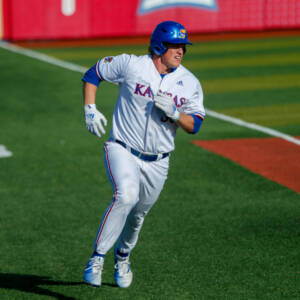 Missouri enters the midweek clash 8-15 and 1-5 in the SEC. The Tigers last played a three-game series with Vanderbilt, falling to the Commodores in all three games.

Two Tigers have tallied 20-or-more hits this season with Mark Vierling leading the way with 24 hits. Andrew Keefer has legged out 20 hits, while holding the team lead with 31 total bases. Torin Montgomery and Luke Mann are team leaders with 15 RBI each, while Joshua Day – their team leader in batting average (.306 | 19-for-26) – has 11 RBI. Cameraon Swanger rounds out the group with double-digit RBI, adding 12, while tying Montgomery and Mann for the team lead with three home runs.

Missouri’s probable starter for the Tuesday game is Lukas Veinbergs, who has made eight appearances with two starts. He has a 0-0 record and one save in 19.2 innings pitched.

UP NEXT
Kansas hosts Texas April 1-3 for a three-game Big 12 series at Hoglund Ballpark. All three games will be available on Big 12 Now on ESPN+.