⚾ Kansas Welcomes No. 5 Texas to Lawrence

Kansas last played March 30, hosting Missouri for its first meeting since the 2012 season. After an eight-run, seventh inning the Jayhawks completed the comeback over the Tigers to earn their 15th win of the season 10-9. The eight runs scored in an inning were the most in any inning this season.

Daniel Hegarty earned his third victory of the season after appearing in relief in the seventh and pitching a scoreless eighth. Jonah Ulane recorded his fifth save of the season.

Kansas faces the Longhorns for the first time in two years this weekend and hold a four-game winning streak over Texas. KU is 8-2 in its last ten games this season and entered its Big 12 opener against West Virginia on a seven-game winning streak.

Ryan Cyr, Cole Larsen and Eli Davis each are probable starters for this weekend against Texas. The last time Cyr pitched against the Longhorns, he pitched a nine-inning complete game shutout on only 86 pitches. He finished with six strikeouts and only two hits allowed. Davis aided in the series-sweeping victory in 2019, pitching four inning in the Sunday finale, while Ulane and Nathan Barry each made appearances.

It will be Cole Larsen’s first home Big 12 start of the year. He led KU to a 9-2 victory over WVU earlier this season. 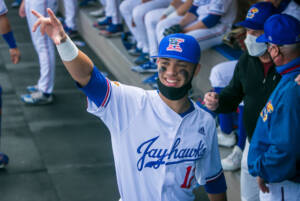 OPPONENT PREVIEW: TEXAS
The No. 5 Texas Longhorns (17-8, 4-2 Big 12) last played March 30 falling to Texas A&M 2-0. Prior to the midweek clash with the Aggies, the Longhorns hosted Oklahoma, winning the series after taking the first two games. UT also earned a series victory Baylor March 19-21 and then No. 12 South Carolina March 12-14.

The Longhorns enter the series with a .265 team batting average and are led by Mitchell Daly, who boasts a .393 average (22-for-56). Daly has 30 total bases with 10 RBI in 20 games played with 18 starts. Zach Zubia (22) ancd Cam Williams (20) are the only two Longhorns to boast 20-or-more RBI with Williams leading the team with six home runs and 49 total bases. Eric Kennedy and Mike Antico are tied for the team lead with 11 stolen bases with Kennedy holding a perfect mark this season.

Texas is slated to start Ty Madden, Tristan Stevens and Kolby Kubichek. Each have started six games this season and have a combined 8-4 record. Madden is second on the team with a 1.83 ERA (5.0-or-more innings pitched), and is their team leader with 39.1 innings pitched and strikeouts (50). As a team, UT has a 3.30 ERA in 223.1 innings

UP NEXT
Kansas hosts Texas Southern April 6-7 for its first two-game midweek series of the season at Hoglund Ballpark.