⚾ Two Doubleheaders Up Next For Kansas at Omaha

LAWRENCE, Kan. – Kansas baseball (5-5, 0-0 Big 12) travels to Omaha to play the UNO Mavericks (4-5, 0-0 Summit League) March 12-13 for a four-game series. The series was originally scheduled March 12-14 in Kansas, but due to impending inclement weather, it was moved to Tal Anderson Field.

Competition will start with a doubleheader Friday at 11 a.m. and conclude with another doubleheader Saturday starting at 10 a.m. Ritch Price is 6-0 against Omaha in his career.

The Jayhawks are fresh off a series win against St. Louis, beating the Billikens in the series final 7-5 in 12 innings to claim the series. KU dropped the series opening contest to SLU, but rebounded in game two behind strong pitching performances by Cole Larsen and Jonah Ulane. Larsen earned the start and tossed a career-high seven innings pitched with eight strikeouts. Ulane tied his season-best with two innings pitched for his first of two saves on the weekend. The series clincher was a back-and-forth battle between KU and SLU with Davis earning the start and pitching seven innings. He was relieved by Gabirel Sotomayor, who made his first appearance of the season, before Daniel Hegarty was handed the ball. Hegarty pitched a commanding 4.1 innings, striking out five of the 14 batters he faced. Ulane made his second appearance in as many days to snag the final two outs for his second save. Hegarty was awarded the victory.

Tavian Josenberger, Dylan Ditzenberger and Jack Wagner all led Kansas at the plate during the SLU series, finishing with three hits each. Josenberger started all three games, and recorded Kansas second triple of the season, while the trio each hit a double. Casey Burnham continues to be a menace on the base paths, going 3-for-3 on stolen bases, while leading Kanasas with four walks. Burnham is 6-for-6 on the year for stolen bases. 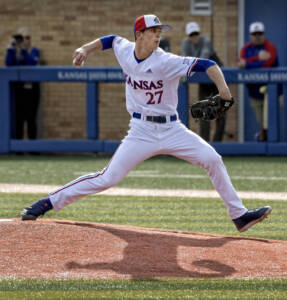 OPPONENT PREVIEW: OMAHA
Omaha enters the series with Kansas 4-5, finishing its series with Creighton, 1-2. The Mavericks were originally slated to open the season against Oregon, but the series was canceled. UNO played a two-game set at then-No. 22 Oklahoma Feb. 21-22, splitting the series, before also splitting a four-game series with Missouri Feb. 26-28.

Joey Machado boasts a team-high 1.80 ERA and 14 strikeouts, while pitching in 10 innings this season. Richie Holetz is the team leader with 16.0 innings pitched and is a close second to Machado with 12 strikeouts. Jacob Mohler is the lone Maverick to record a save this season, and has a 2.08 ERA with eight strikeouts.

UP NEXT
Kansas heads to Springfield, Missouri for a midweek clash with Missouri State, Wednesday, March 17.