LAWRENCE, Kan. – The Kansas women’s tennis team concluded its Spring 2021 season, that was highlighted with top-100 rankings from the Intercollegiate Tennis Association and 7-0 a shutout of Southeast Missouri State on the courts at the Jayhawk Tennis Center.

"The 2020-21 season had many obstacles and hardships, but at the end of the day we have higher expectations than what we achieved this year. Part of being on the Kansas Tennis Team is striving for excellence and not making excuses if we have failures. We as a program fell short of our goals and standards this year but we promise to come back as strong as ever next year. Our fans can expect an extremely hungry and motivated team next season. We can't wait to get back to work!"

The Jayhawks commenced the 2021 season ranked at No. 25 in preseason ITA on January 14.

Additionally, Sonia Smagina landed at No. 81 on the individual rankings while the doubles team of Malkia Ngounoue and Carmen Roxana Manu landed at No. 49 in the preseason rankings.

Kansas received this top-tier recognition due, in fact, to the strong finish to the 2019-20 season going 7-4 on the abbreviated season due to the COVID-19 pandemic 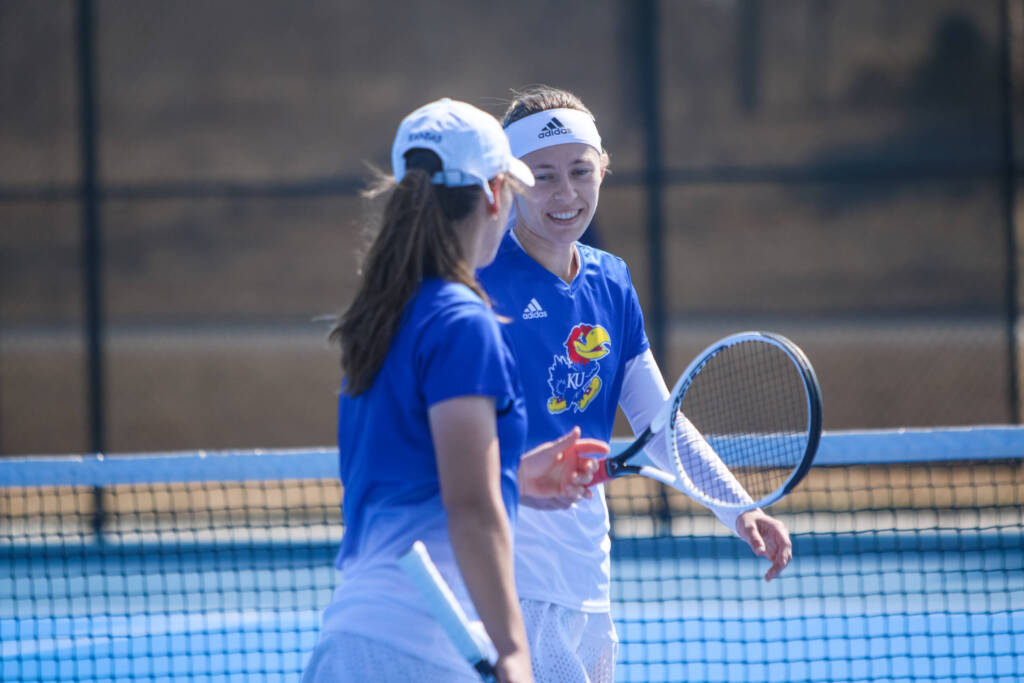 Kansas notched the first victory of the 2021 season at Tulsa (4-3) back on January 31. The Jayhawks would proceed to mount a win streak that included multiple back-to-back wins, taking 5-of-8 of their matches.

Next up, Kansas notched their first back-to-back victories of the 2021 season, defeating both Wichita State and Arizona at home.

The Jayhawks’ first Big 12 Conference win came back on February 27 on the courts of the Jayhawk Tennis Center after besting the Cyclones 4-3.

Kansas hosted Southeast Missouri State University for the first outdoor meet of the spring season and debuted their most dominant performance of the season, defeating the visitors 7-0 in Lawrence. 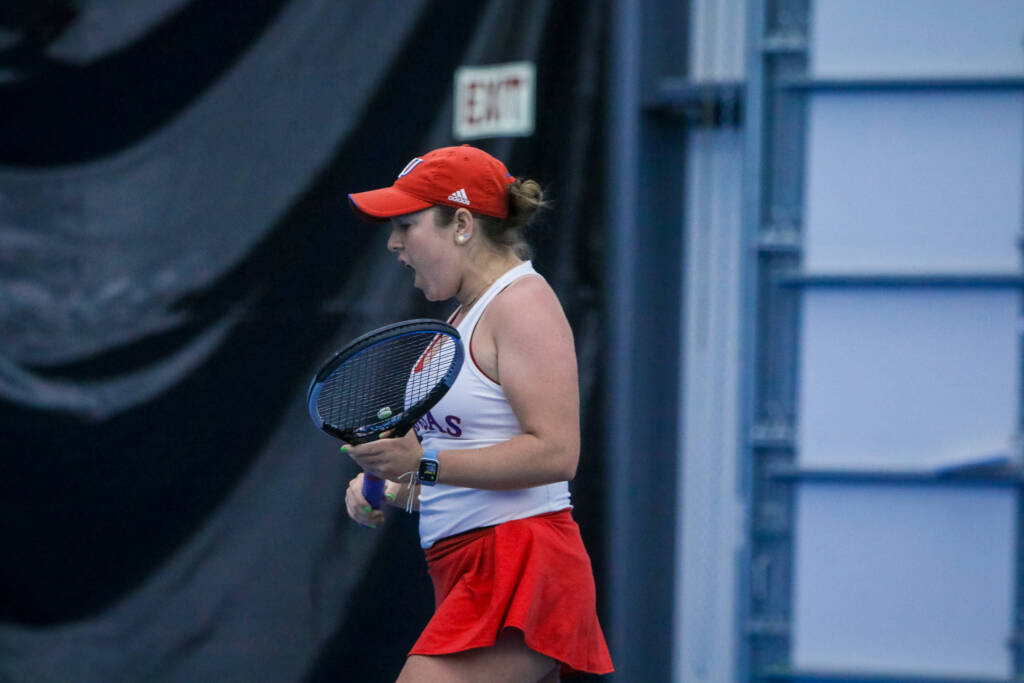 The Jayhawks’ two consecutive wins was a repeating theme during the 2021 season, after taking down Kansas State and West Virginia only five days a part. 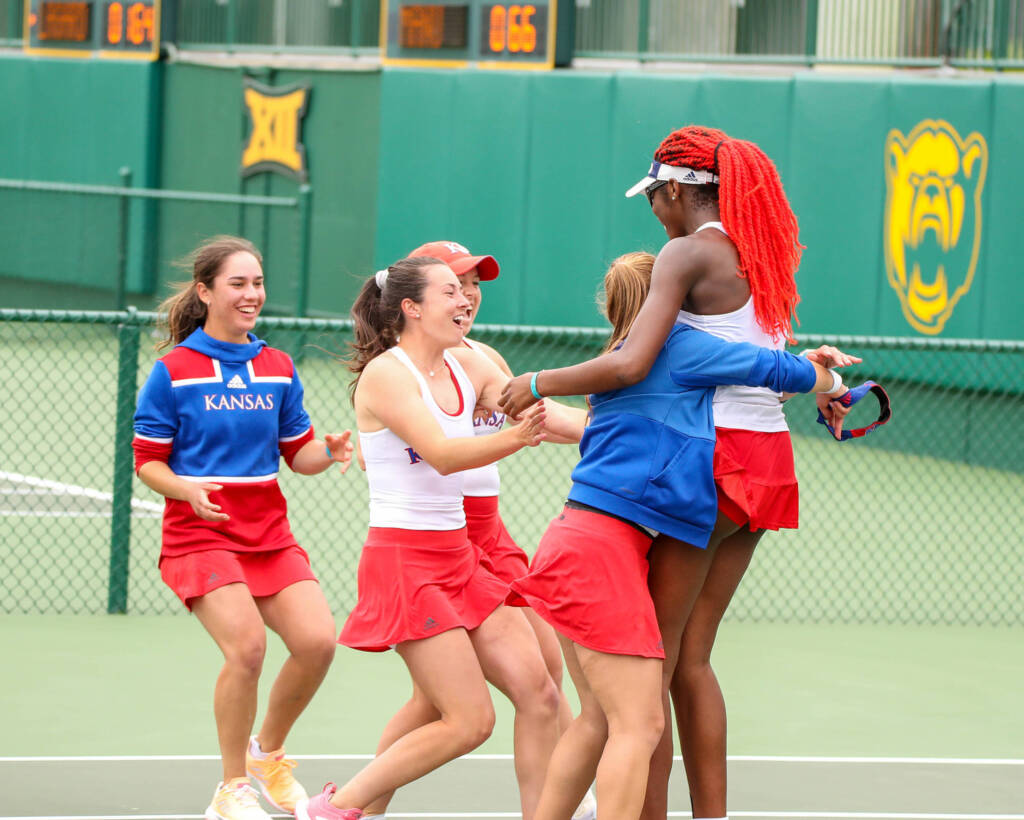 The No. 9 seeded Kansas outlasted the No. 8 seeded Kansas State in the opening round of the Big 12 Women’s Tennis Championship back on April 22, taking the match 4-3 on the Hurd Tennis Center Courts in Waco, Texas.

The Jayhawks earned postseason awards for their efforts both on and off the court.

Congrats to Julia, Vasia, Sonia and Roxana for being named to the 2021 Academic All-Big 12 Teams, plus a pair of perfect 4.0 GPAs!

Deming, Karvouni, Smagina and Manu all earned this recognition for the first time in their careers. Deming and Karvouni, both sport management majors, notched a 4.0 grade point average to join nine other Big 12 student-athletes across men’s and women’s tennis. Smagina, a liberal arts and sciences major, represented the First Team alongside her teammates Deming and Karvouni. Manu tabbed Second Team honors for her studies in psychology.

The junior duo of Ngounoue and Lagarde garnered honors on the 2021 All-Big 12 individual women’s tennis postseason awards. This is Ngounoue’s second postseason conference honor, after garnering All-Big 12 Doubles Second Team honors in 2019. Her success on the court placed her on the All-Big 12 Singles First Team. Ngounoue notched nine wins in singles play, mostly in Kansas’ second position, later taking over the number one spot during the conference tournament. Lagarde earned her first Big 12 career accolade, being named to the Big 12 Individual No. 5 Singles position Champion alongside Texas Tech’s Olivia Peet. Lagarde notched six-singles victories on the season with four conference wins. She is no stranger to postseason accolades, receiving recognition back at UC Santa Barbara on the Big West Singles Second Team.