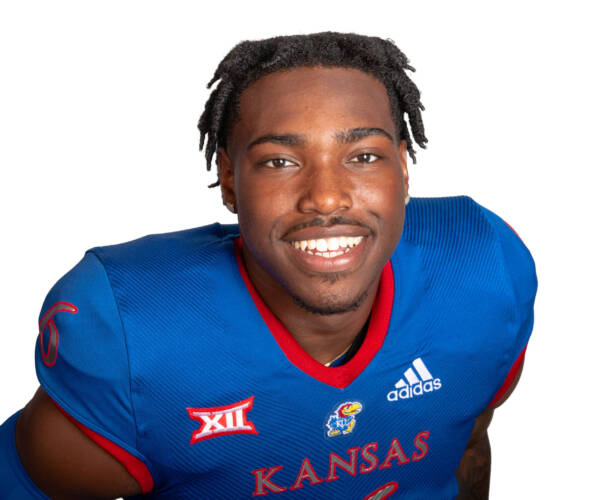 2021 (So.): The sophomore played in six out of the Jayhawks 12 games, earning starts in the last three … Completed 81-of-117 pass attempts, good for 860 yards with seven touchdowns, and a 69.2% completion rate … Rushed for three TDs throughout the season for 83 yards … at Coastal Carolina: Went 3-of-5 for 49 yards along with two carries for 11 yards … Baylor: Saw little playing time and attempted one pass with no completions … Kansas State: Completed 13-of-19 pass attempts for 105 yards and one TD while rushing for three yards on two carries … at Texas: Made first start of the season and rallied the Jayhawks to an overtime win of 57-56 over the Longhorns … Also completed 21-of-30 passes for 202 yards and three TDs … While rushing for 45 yards and one TD on 11 carries … at TCU: Set a new career high by completing 22-of-30 passes good for 255 yards, two TDs, and one interception … Had six carries for 37 yards and one TD … Completed his longest pass of the season for 44 yards … West Virginia: Finished the season with another highly efficient game against the Mountaineers … Threw 22-of-32 for 249 yards, one TD, and two interceptions.

2020 (Fr.): The true freshman played in seven of KU’s nine games this season, earning starts at QB in six … Completed 76-of-152 pass attempts, good for 718 yards through the air with one throwing touchdown and a 50.0% completion rate … Rushed for three TDs throughout the season to be the team’s leader in rushing attempts with 73 carries and rushing TDs with his three … On special teams, punted once during the season, which went for 34 yards. Coastal Carolina: Made his debut as a Jayhawk in the season-opening game … Completed 1-of-2 pass attempts for a total of 13 yards … at Baylor: In his first-career start at quarterback, completed a career-high 19-of-33 passes for 159 yards … On the first drive of his collegiate career, led the Jayhawks down the field on an eight-play, 79-yard drive that resulted in a Pooka Williams Jr., touchdown … Oklahoma State: Made his second-career start at quarterback vs. the Cowboys … Completed 3-of-5 passes for two yards … at Kansas State: Started his third-career game in Manhattan, throwing for a career-high 207 yards on 22-of-39 passing … Scored the first touchdown of his Kansas career with an eight-yard rush in the second quarter … The touchdown was the fifth of the season for the Jayhawks … Also rushed for a career-high 27 yards on 17 carries … Recorded the first punt of his career in the third quarter, picking up 34 yards … Iowa State: The freshman quarterback’s 36-yard pass to Luke Grimm in the second quarter was the longest passing play of the season and the fifth-longest play of the season for the Kansas offense … His 13-yard rush in the third quarter was a career high, topping his 11-yard run vs. Baylor … Made his first start as an 18-year old; his previous three starts were when he was still just 17 years of age … at Oklahoma: Completed 11-of-31 passes to his receivers at Oklahoma for a total of 115 yards on the afternoon … TCU: One of six true freshmen to start on offense for the Jayhawks, he at QB … His 48-yard touchdown pass in the first quarter to Kwamie Lassiter II was the first of his career and KU’s longest passing play of 2020.

In toppling Texas 57-56 last weekend, Kansas football made history on several levels. Prior to Saturday, the program had never won in Austin. The Jayhawks’ 57 points were the most the team had ever scored in a road tilt. An away-from-home losing streak in conference play dating back to Oct. 4, 2008, ended.